Lafayette Parish voters could decide in November whether the 14-year experiment in consolidated government was a mistake. If a majority says yes, Lafayette will revert to separate city and parish forms of government by January 2012; city voters in October 2011 will elect a city council and parish voters will elect a parish council, as they did before consolidation went into effect in 1996.

In a stunning turn in timbre at Monday’s Lafayette Consolidated Government charter committee meeting, talk shifted from more mundane topics — amending the city-parish charter for reapportionment and changing Joey Durel’s title to mayor-president — to the “900-pound gorilla,” as committee member and District 8 Councilman Keith Patin (pictured above, at left, with Greg Davis, center, and Joey Durel; photo by Robin May) put it. Patin’s observation was prescient; that 900-pound ape could not be ignored. Moments before the gavel closed the meeting, the seven-member committee voted unanimously to advance a deconsolidation ordinance to the Lafayette City-Parish Council. In all there were 12 discussion items on Monday’s agenda; only reapportionment and deconsolidation made it to a vote.

“What would deconsolidation do to all the other amendments?” Patin asked City-Parish Attorney Pat Ottinger ahead of the committee vote.

“Deconsolidation is a fancy word for repealing the charter,” Ottinger replied. “All other amendments [to the charter] would be moot if the charter is repealed.”

City-Parish President Joey Durel, who is also a committee member, propelled the discussion with an observation: “We as a committee have to decide, do we give it a shot and make consolidation work? If we decide we’re not, then go straight to [the deconsolidation amendment].”

Lafayette Parish is one of only three in Louisiana to operate under a consolidated form of government, along with East Baton Rouge and Terrebonne. Baton Rouge was stung by consolidation in November when, for the second time in a year, voters parish-wide shot down an almost $1 billion tax proposition that would have benefited mostly the city; residents outside the city of Baton Rouge were the driving force in defeating the proposition. Lafayette has found itself navigating similar straits in recent years as city and parish — urban and rural — prerogatives collided.

The concept of deconsolidation is so foreign that the spell check function on many word processing systems flags it; deconsolidation is, according to Adobe InCopy, a non-word. But it may become a reality in Lafayette.

The ordinance to deconsolidate drafted by committee member Greg Davis reads in part:
Many citizens of the Parish of Lafayette have expressed concerns about the operation of the Consolidated Government operating under the Home Rule Charter since it became effective in 1996, with citizens in the City of Lafayette being concerned about the governing authority of the Lafayette Utilities System, among other issues, and many residents outside the City of Lafayette expressing concern that the Consolidated Government does not address their needs and concerns …
Concerns were expressed among committee members that the topic of deconsolidation was being rushed to the fore. “To me, it’s just impossible,“ observed commission chair Jay Castille, who argued instead for tackling consolidated charter amendments and allowing parish votes more time to digest and discuss such a drastic measure as deconsolidation. But ultimately a consensus emerged that scrapping a consolidated form of government should preempt any talk of simply amending the charter. Deconsolidation won the day.

Redrawing district boundaries, regardless of whether consolidation is repealed, will be necessary due to this year’s census. Before shifting to discussion on deconsolidation, committee members unanimously approved an alteration to language in the charter to give the City-Parish Council more time to redraw districts; currently the charter says districts must be redrawn six months before an election, which would be virtually impossible if census figures don’t come in until March 2011 as expected.

In one of the more striking moments of Monday’s meeting, Ed Abell (pictured below at left; photo by Robin May), the chair of the 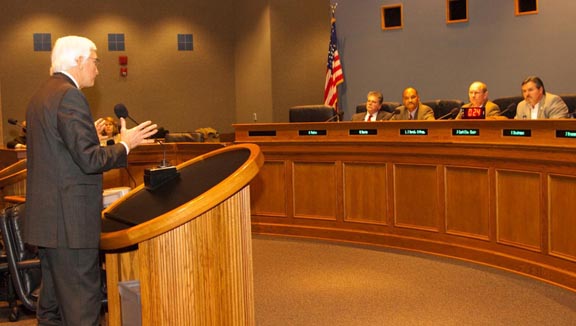 original charter commission that drafted Lafayette’s consolidated constitution, addressed the committee. “We hoped it would consolidate both emotionally and governmentally the people of this parish,” he said of the charter. “Unfortunately, it hasn’t.” Committee member and District 4 Councilman Kenneth Boudreaux concurred: “We have to end this thing and start from scratch.”

Cooking with a culinary metaphor, Abell added, “We were writing a constitution, not a cookbook, and sometimes the dishes don’t taste too good.”

The City-Parish Council will vote on an introductory ordinance Feb. 17establishing a Nov. 2 deconsolidation election. If it passes, a final vote by the council is expected March 9.