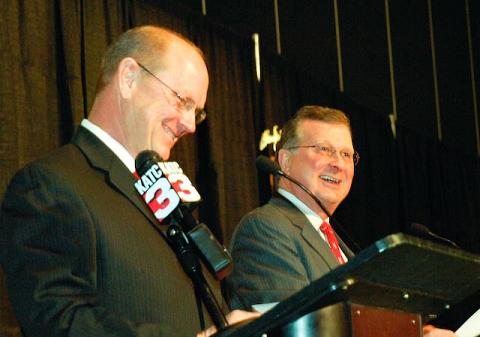 City-Parish President Joey Durel was joined Tuesday by UL President Dr. Joe Savoie for the annual state of the parish address at the Cajundome Convention Center. The two laid out a vision of Lafayette’s economic future that hinges on shared goals of the city-parish and the university.

Durel touted Lafayette’s growing nationwide reputation as a center of innovation. City-parish government, he pointed out, has been invited to be part of a panel discussion at the upcoming U.S. Chamber of Commerce convention in  Washington, D.C., to discuss such projects as LUS Fiber.

Early in the presentation Durel praised the resiliency of the Lafayette economy, which enjoys an unemployment rate (5.5 percent) well below the state average (7.5 percent) and far below the national average (10 percent), with a caveat: “There is no denying that the economic plight of the country has affected Lafayette. Our sales taxes continue to decline and if there isn’t a leveling off in the next few months, we will be forced to make some difficult decisions as it relates to cutting our budget.”

Durel also mentioned new initiatives related to LUS’ fiber to the home project, including an event April 20-22, Fiberfête, during which technology experts from around the country will be in Lafayette to discuss and plan the city’s technological future. “I’m committed to seeing Lafayette build on what’s already great about our city and our parish by us becoming a leader in driving fiber-powered 21st-century innovation,” he said.

Overall, the joint presentation (photo by Robin May) was short on timetables and funding mechanisms for their vision for Lafayette’s future development, but long on cooperative-endeavor ideas for applying smart growth principles to UL-owned land in the heart of Lafayette. “It is important to recognize that the essential economic advantage of cities flows from their abilities to promote and encourage interactions among people,” Savoie told the sold-out lunch crowd. “Cities work best and are most successful economically when they enable easy interaction among people.”

Among the ideas mentioned:

â-Â Commercial development on Congress Street across from Cajun Field in the University Research Park that would include hotels, restaurants, shops, retail and residential spaces

â-Â Transformation of the horse farm into a passive, public park

â-Â Conversion of Johnston Street into a boulevard

“All of this and much more will be addressed through a comprehensive plan,” Durel said in closing.