While elected officials and special interests from Louisiana are rallying behind the coastal initiatives included in President Barack Obama’s proposed budget, many of them are also opposing another section that increases the cost of doing business for oil and gas companies.

The administration’s fiscal year 2011 presidential budget contains $35 million for restoration projects sponsored by the U.S. Army Corps of Engineers, of which $19 million will go directly to construction. While coastal advocates stressed much more assistance would be needed in the future, the proposed line item was embraced practically down the line and on both sides of the fence in the Bayou State.

But Obama’s budget also calls for imposing roughly $40 billion in new and additional taxes on the U.S. energy sector over a 10-year timeframe. The bulk of the windfall would come from eliminating two accounting practices that have been in place since the first two decades of the 1900s: the percentage depletion of oil and gas wells and the expensing of intangible drilling costs.

Critics contend these changes would disproportionately impact independent oil and gas companies, which drill 90 percent of domestic wells and produce 82 percent of U.S. natural gas. “The elimination of these two accounting procedures would overwhelmingly impact smaller independent oil and gas explorers, not big oil,” says U.S. Sen. Mary Landrieu, D-New Orleans. “The result would be putting thousands more Americans out of work at a time when we should be creating, not eliminating, jobs. That is poor policy.”

Louisiana Department of Natural Resources Secretary Scott Angelle says the incentives have been critical to the financing of energy exploration for almost a century by helping companies manage the high financial risks involved in finding oil and natural gas. He adds that cutting back on drilling and domestic production would mean a decrease in supply and subsequent increase in cost for fuel, and estimates that every 50-cent increase in the price of gasoline means an extra cost to the nation’s drivers of $1.4 billion a week. “If we damage the economic structure that has allowed these new discoveries and sources of traditional energy we never knew we could reach before, then our potential for greater energy independence will remain buried underground,” Angelle says.

Barry Russell, president and CEO of the Independent Petroleum Association of America, says Obama failed to phase out the same tax incentives last year because small businesses were at the heart of the matter and because lawmakers recognized that the energy sector plays an important role in the U.S. economy. “One year later, that role is even more critical and apparent than it was back then,” Russell says. “Unfortunately, in his search for easy revenue, the president appears once again to be endorsing a series of tax changes that will result in fewer American jobs, less government revenue and a tightening of our already dangerous dependence on foreign, unstable energy.” He further says the changes would reduce investments in new U.S. production by 20 percent to 40 percent.

Some argue, however, that the proposed tax revisions would help the nation transition into a new economy. “With this budget, President Obama is starting to usher in a clean energy economy,” says Wesley Warren, director of programs for the Natural Resources Defense Council, an environmental advocacy group. “That means more jobs, less carbon pollution and a more secure nation.” 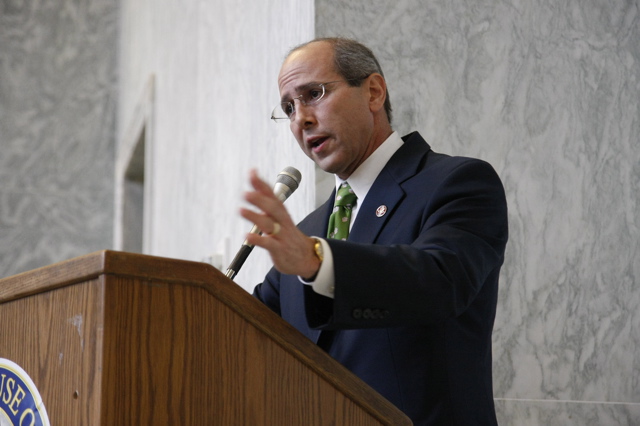 U.S. Rep. Charles Boustany, R-Lafayette (pictured left), a member of the tax-drafting House Ways and Means Committee, is opposed to the budget provisions. He says he asked Treasury Secretary Timothy Geithner to tell him how many jobs would be lost because of the proposed policy and Geithner responded in a letter stating that oil and gas tax preferences “encourage overproduction of oil.”

In response, Boustany offered up another question: “Does anyone really believe we have too much American energy production?” Boustany says he also inquired, in a floor speech, about how so-called “green jobs” would be created to take the place of those lost from less production and he received no answer.

In Louisiana, domestic energy exploration and production provides direct employment for more than 50,000 people. In Lafayette Parish, in the U.S. 90 corridor, more than 15,000 jobs are tied to the energy sector.