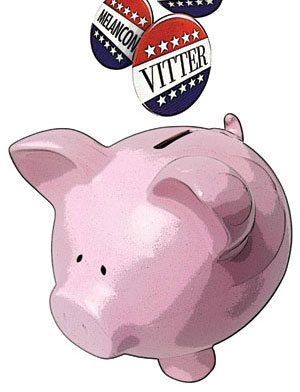 There's no better place to start than the U.S. Senate showdown, and there's no mistaking who's leading the money race there. Incumbent Sen. David Vitter, R-Metairie, raised more than $1.2 million from October to December last year, compared to his challenger's $600,000 from the final quarter of 2009. As for the tell-all, money-in-the-bank figure, U.S. Rep. Charlie Melancon, D-Napoleonville, has roughly $2 million, while Vitter is sitting on $4.5 million.

Democrats nationwide have seen better political climates. Based on the latest Gallup/USA Today poll, 58 percent of respondents said the Democrat-controlled Congress was either "below average" or "one of the worst ever." But Bradley Beychok, Melancon's campaign manager, and others argue that the money game is far from over, especially since the national parties have yet to get involved.

The Republican National Committee has become relatively cash-poor in recent months, and it started 2010 with only $8 million in the bank, which is down from $22 million just a year ago. That has led some GOP faithful to fret that the RNC won't be able to support its Republican incumbents like it has in the past.

RNC Chairman Michael Steele said in a press release last month that the GOP bankrolled several expensive and successful campaigns in 2009 and will do the same in 2010. The Democratic National Committee, meanwhile, started the year with nearly $14 million cash on hand.

The contest to replace Melancon in the 3rd Congressional District will be just as intense, if not significantly closer competitively. The wild card seems to be Louisiana National Guard Maj. Gen. Hunt Downer, a Houma Republican and former speaker of the House. "I'm 99.9 percent to the point of making that decision, and I look forward to continuing my public service," Downer says.

State Natural Resources Secretary Scott Angelle of Breaux Bridge, a Democrat expected to flip GOP, has been toying with the race as well, but did not respond to a request for comment. Kristian Magar, a Republican from New Iberia, is said to be running but filed no campaign finance report last month.

So far, the real story seems to be the aggressiveness of Democrat Ravi Sangisetty, who raised $67,000 last quarter as a political novice and was the only candidate to raise money ($84,000) during the third quarter of 2009. Formerly an associate in McGlinchey Stafford's New Orleans firm, Sangisetty has moved back to his hometown of Houma - home to the bulk of his donations. He has about $224,000 in the bank, of which $100,000 is a personal loan to his campaign.

There's no doubt his bid will mirror the south Louisiana Democratic archetype. Trial lawyers dot his donor list, like Michael X. St. Martin of Houma, who gave $2,400, and Donald T. Carmouche of Gonzales, who forked over $1,000. He has also hired as consultants Lynncal Bering and C. David Wilburn, both of whom cut their teeth as operatives with the state Democratic Party. Sangisetty is also building contacts, as evidenced by a $500 donation to the Legislative Black Caucus Fund.

New Iberia attorney Jeff Landry, a longtime Republican activist, actually raised more money during the final quarter of 2009 than did Sangisetty and he did it in a shorter amount of time. In just three weeks in December, Landry locked down $96,000. That includes $1,000 from shipyard magnet Boysie Bollinger of Lockport and $2,400 from construction tycoon Lane Grigsby of Baton Rouge, which are two names that generate confidence among the state's top GOP donors.

While Landry's report doesn't show an overabundance of spending yet, he has retained the services of D.C. consultant Brent Littlefield, a well-known talking head on MSNBC who previously managed the unsuccessful congressional campaign of former state Sen. Craig Romero.

There's another familiar name from 2004 to join Landry: state Rep. Damon Baldone, D-Houma. While Baldone says he's likely to join the fray, he has not yet filed a campaign finance report for the current election cycle -- but he did raise more than $257,000 for the 2004 contest, of which $145,000 was self-financed.

Oil field manager Kristian Magar, another Republicans from New Iberia, kept pace with his opponents by self-financing about $20,000 and now has about $21,000 in the bank to launch his campaign.

The biggest shocker from this district comes courtesy of State Rep. Nickie Monica, R-LaPlace. Even before Melancon announced he would oppose Vitter, Monica was on the stump. Just a year ago, he was the only declared candidate. He was also bragging that he was being courted by national Republicans. But according to his campaign finance account, Monica has raised only $150. And it came form his own pockets.

U.S. Rep. Charles Boustany, R-Lafayette, appears to have an easy go at re-election. He's the only person to file a fourth quarter report in the 7th Congressional District, and the numbers speak for themselves. He collected $130,000 in contributions during the last three months of the year, and roughly half of it came from political action committees, including corporate biggies like Jim Beam, Chevron, UPS and General Electric.

Today, his campaign's account is holding about $399,000 (being an incumbent makes that easy to do). Boustany accepted $1,000 from Bank of America in November, just around the time the House Oversight and Government Reform Committee was looking into Bank of America's $45 billion federal bailout. A longtime friend of horse racing who once voted against banning Internet gambling, Boustany benefitted from a $1,000 donation from the American Gaming Association as well. He even got some of that donkey support, too: state Sen. Elbert Guillory, D-Opelousas, ponied up $300.

Boustany, however, can give as well as he takes. His campaign bestowed upon the National Republican Congressional Committee a massive $86,000 check. Finally, in keeping with the spirit of the season, Boustany also dropped more than $2,600 on Mardi Gras ($525 in swag from Beads By the Dozen in New Orleans and $2,100 on ball tickets from the Mystic Krewe of Louisianans).

If there were any Democrats waiting in the wings last year in preparation to take on freshman Congressman Bill Cassidy, they didn't raise any money. Campaign finance reports for the final quarter of 2009 were due to the Federal Election Commission last week, and Cassidy, R-Baton Rouge, was the only politico in the 6th Congressional District to publicly file figures.

Moreover, Cassidy's report reveals his campaign has a whopping $735,000 in the bank, which exceeds the holdings of all other Louisiana House members and is the second highest among freshman House Republicans, according to National Journal's House Race Hotline.

From October to December, Cassidy collected more than $161,000 in donations, 96 percent from individuals in Louisiana (65 percent of that total can be traced back to the Baton Rouge region).

In a prepared statement, Cassidy said he was grateful for the support. "I have worked to bring the ideas and values of our district to bear in Congress," he said. "People vote with their dollars, and this shows a lot of votes for limited government, free enterprise, and individual opportunity."

Although he's a newbie and relative political novice, Cassidy's $100,000 in expenditures from the last quarter shows he's looking to make smart moves. A great deal of his spending was dedicated to consulting services, like $8,800 to Massachusetts fundraiser Ethan A. Zorfas, a well-known GOP operative. Cassidy also kicked a sizeable bit of dough up the ladder, contributing $19,000 to the cash-strapped Republican National Committee.

For the RNC, it was money in the bank. For Cassidy, it was a down payment on his political future.

As for the quarter, Cassidy was outraised only by Rep. Anh "Joseph" Cao, R-New Orleans, who put together an impressive $247,000 - and spent it all. Not surprisingly, there's a lot of talk about Cao's burn rate for the fourth quarter, or what could be construed as negative cash flow. In short, Cao spent $35,000 more than he raised from October to December.

So what's the big deal? Such practices prohibit his campaign from building up a reserve for what is expected to be the most contested race in the nation. While he has $316,000 in the bank now, his third quarter filing in 2009 showed $351,000 cash on hand - representing a decrease.

Of the $283,000 Cao spent during the last quarter, a great deal of the cash went to direct mail. Nearly $39,000 alone went to Base Connect of Washington, D.C., a firm with connections to various outreach organizations that rely upon race-driven issues and so-called 527 groups, like the National Black Republican Association, which have relaxed reporting requirements. According to the Washington Post, the NBRA once bankrolled radio ads that "identify Martin Luther King Jr. as a Republican and pin the founding of the Ku Klux Klan on Democrats."

For a Republican representing a Democratic district, that's a connection worth remembering when the contest heats up later this summer and fall.