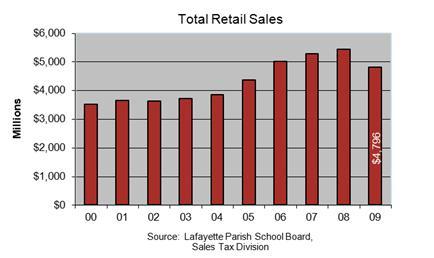 Unlike much of the rest of the country, which suffered declining retail sales when the  economy took a dive in 2008, Lafayette Parish's taxable sales increased 3 percent in 2008. Just about everyone breathed a collective sigh of relief at the slight uptick in this barometer of economic activity, but the optimism quickly faded, as the decline of 2009 was right around the corner. When January's totals came in, they were down 6 percent. And while February bounced up ever so slightly, same month sales comparisons consistently showed declines through the remainder of the year. The biggest disappointment came in October 2009, which plummeted $97 million, or 21 percent, from October 2008.

Though certainly unrealistic to believe the parish's record-breaking retail sales streak could continue, the decline is cause for concern. But it certainly is no reason to panic, as the 2009 total is right up there with 2005's sales, a big year of growth even before hurricanes Katrina and Rita brought an influx of shoppers to the area and federal incentives that spurred a construction boom and sent retail sales beyond the $5 billion mark for the first time. "I'm not going to pretend that it's as good as it was, but this is on pace with pre-hurricane years," says LEDA's Gregg Gothreaux. "You don't build your business plan based on your best year. You build your business plan based on indicators for the past five years, more if you can," he adds.

"Obviously the boom has curtailed, and we're feeling the results of the national recession and what's going on in Washington. It's certainly affecting the oil and gas industry - they're waiting on Washington's attitude toward the energy business," Gothreaux continues. "The one thing business can't handle is uncertainty. That holds true not just for the oil and gas industry but for all businesses."