Pamplona's chef, Orlando Amaro, is back from Barcelona, where he spent a month studying under cooking super star Ferran Adrià.

The mastermind behind the internationally acclaimed restaurant elBulli is revolutionizing cooking, and training a few chefs at a time with his techniques. This year, in the class of 20 chefs from across the globe, three traveled from the U.S., a chef from Thomas Keller's California destination restaurant, French Laundry, one from a temple of chemical cooking, Alinea in Chicago, and Amaro.
"I've been working on getting a chance to study with Ferran for five years," Amaro says. "Not everybody is allowed to do that. Only when you have good references."
It was an eye opener for Amaro, who hails from Venezuela. "I've been 15 years a chef, but I think I was cooking in the wrong way after being there with Ferran," says Amaro. "I learned the [importance] of cooking food the chemical way." He also got a strong feel for how important it is to eat locally. The faster to the table, the fresher the flavor, Amaro says. And when food is so fresh, it needs less saucing, thus the treatment is as health conscious as it is futuristic. 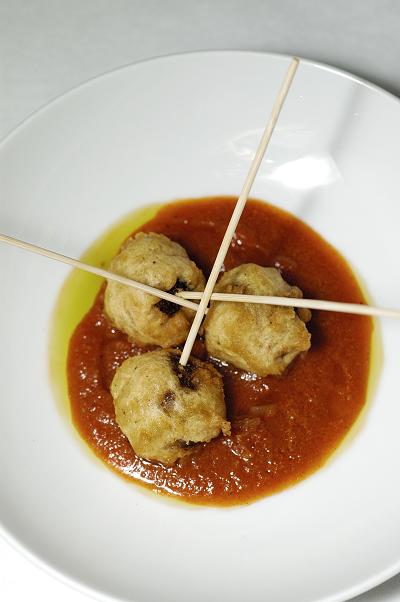 Amaro has been retooling the kitchen at Pamplona since his return. The result is a new menu at Pamplona, which came on line today. Some highlights are a handful of new tapas - including Galician octopus, tender crab fritters in a sensational salsa criolla (spicy tomato sofrito sauce) that begs for sopping with toasted bread (you have to ask for it) and a traditional Spanish tortilla, (caramelized sweet onions, potatoes and eggs) which Amaro has lightened into a soufflé.
Grilled Portuguese sardines are on the menu full time and there's a new slow braised Moroccan style lamb stew with dried apricots perfumed with lavender, cumin, cinnamon, ginger and charred rosemary that is so good it will make you blush. To get a look at the whole menu, click here.