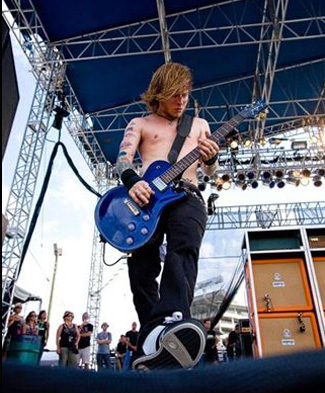 1. What's up with all these hits, man? Is it a trip to be, like, "Dude, I got gold records?"
Umm...yes it is a little trippy I guess. When you write a record I think you hope to have hits...and the fact that we have is pretty amazing. We have been very blessed with this record.

2. Hardest lesson to learn about the music industry?
That is isn't all sunshine and rainbows.  It's almost like anything else in life to the point where there is a lot of let down and not everyone keeps his/her word. I think its 10% action and 90% talking of action.

3.  History of Shinedown in 10 words, more or less?
Musicians who love music who love playing it together. Not band guys in a band.

5**. Guitarist Mike Bloomfield once famously espoused: "Dig yourselvesbecause it's really groovy." In the event of losing one's grooviness by age, cultural shift, insurance fraud, divorce, whatever - what method should one most avoid in attempting to regain it?**
Trying to go TOO far to stay hip. I don't think I should see Mick Jagger Tweeting or wearing Crocs you know? He's cool on his own. He doesn't need to stay with the times I suppose.

6. Worst gig ever?
Bringing two busses and a semi-truck into The Black Sheep in Colorado Springs, Colorado.

7. Next evolution of mankind: blind date with disaster or metaphysical upgrade?
It's already here: ChatRoulette. (laughs)

8. Pissing in the wind vs. holding it in?
I think you must piss in the wind to learn that you shouldn't.

Shinedown play the Rox Club at the Cypress Bayou Casino on March 22.