I knew Kent Hutslar only well enough to envy his talent, and to marvel at the remarkable ease with which he moved through the world. He could bend your ear for 30 minutes about the latest photographic technique he was drawn to or the music he was digging before you could get in a word edgewise. Just nod, smile and let Kent ramble. 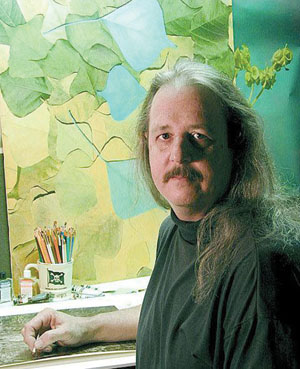 I knew Kent Hutslar only well enough to envy his talent, and to marvel at the remarkable ease with which he moved through the world. He could bend your ear for 30 minutes about the latest photographic technique he was drawn to or the music he was digging before you could get in a word edgewise. Just nod, smile and let Kent ramble.

He died Saturday morning after spending nearly a week in University Medical Center with what began as a fever and cough and turned into a pneumonia he couldn't shake. Kent contracted hepatitis while working in the oilfield 30 years ago as an industrial nurse. Who knew this about Kent, that he was a nurse before he was a professional photographer? I surely did not. In 2007 his liver cashed in its chips, as the livers of hepatitis patients are wont to do, and in 2008 he underwent a procedure to hold him over while he waited for a transplant. Kent died waiting.

It is fair to say that his passing leaves a formidable crater on Lafayette's art landscape. Time will soften its edges, mute its contours, but right now the crater gapes. A raw, throbbing wound.

Kent came into The Ind office about six or eight months ago. I don't know why he was here, but he cast a long, amiable shadow as he made his way around the office chatting with the natives. Out of my cubicle for a cup of coffee we practically ran into one another. I hadn't seen him for months, and that was from afar at a festival or an ArtWalk. I didn't know he was sick. I mentioned a recent series of panoramic photos he had done on downtown Lafayette, how impressive they were. That got him started. We talked - honestly, he talked; I did the nodding and the smiling - for about 15 minutes then he shuffled off into the blur of Jefferson Street.

I was one of many who was in Kent's outer orbit, pulled, I knew always, by his gravitational heft, but unfortunately never deep enough in the gyre to discern his geography. I was a little intimidated by Kent, I'll admit. He was an artist of the first order, but he never made a pretense of being an artist. You saw his work and you knew. He made me and many others feel like equals. I was always pretty certain that I wasn't an equal. Not of Kent's. Maybe of some of the others.

I only found out after he died that he was both an Eagle Scout and a veteran of the Air Force. I know the former served him well in the latter. As his stamina waned over the last several months he turned to Facebook as a way to stay in touch and share his interests and insights.

I spoke Monday morning with Kent's wife, Gwyn, who was remarkably composed 48 hours after Kent's death. The occasional ripple in her voice told me I was catching her between waves of anguish. But she was calm and grateful for the outpouring from the community. It sustained her, she said.

A PayPal account has been established to help Gwyn defray the staggering cost of Kent's illness. Click on the "personal" tab on PayPal's home page; credit card donations can be made to [email protected].

A week before The Independent became my employer in March 2009, I wrote an in memoriam for Vince Marino, a former editor. Now I write one for Kent Hutslar. I will ask of friends whose talent is beyond my abilities but not beyond my admiration, please talk among yourselves and agree that only one of you dies per year. I can't bear to write columns like this with any greater frequency.