The upcoming ArtWalk on April 10 is promising to be a blockbuster event. Festival International brings a beat 6:30 - 8:30 p.m., with bands playing all over downtown. This week, I'll be introducing some of the artists who are exhibiting at ArtWalk. 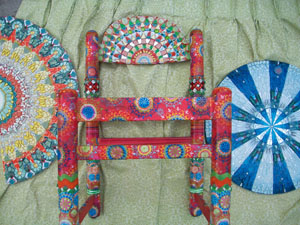 Cajun Spice on Jefferson Street is featuring artist Tanya Falgout. A UL grad, she began a series based on Lafayette's downtown in the 1980s. Remnants of her 1984 downtown mural can still be seen on the back wall of Antlers, facing the parking garage.

After spending most of the 90s in Austin, Texas, and the early part of this decade raising a daughter and teaching math and art in Lafayette public schools and through the Acadiana Arts Council, Tanya recently moved to New Braunfels, Texas.

Her new house needed major renovations, especially in the bathrooms and bedrooms. "I took classes at Pottery Alley to learn how build a ceramic vessel sink and design hand painted tiles to use in the showers," she says. "The rooms are full of artwork, many from Lafayette artists like Don LeBlanc, Kelly Guidry, Angie Reill, Dutch Kepler, and Tom Ladousa.  It feels wonderful to surround myself with the artwork of those who have inspired me back home." 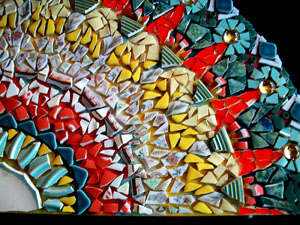 Falgout was inspired to create mosaics on the floors, ceilings and walls of her home.  She says she gains great pleasure from taking something broken or undesirable and transforming it into something beautiful to behold. Much of the wood which was torn out of the house has been reused and cut into the rectangular, round and arched shapes that she uses as foundations for building mosaics. She salvaged the glass from all the windows that were replaced and much of the bathroom tiles and mirrors that were destroyed in reconstruction.

Falgout's new series of eclectic chairs, mosaics, and mosaic-inspired paintings takes the recycled trash to treasure theme to new heights.  Mandala-like round images and arches represent the pigments found in light and resemble suns and starbursts with radial symmetry.  Acrylic paintings of bouquets are transformed into stained glass mosaics using clear glass and dark grout. Oil paintings in the exhibit combine the techniques used in creating mosaics. Tiles and glass were arranged on canvas, but instead of gluing, the pieces were spray-painted then removed, leaving imaginary grout lines and organic forms to paint. "These mixed media creations are so enjoyable to make," she says. "I love transforming the broke-down into beautiful."