If you're into triathlons, chances are you've heard of Macca, aka Chris McCormack.

If you're into triathlons, chances are you've heard of Macca, aka Chris McCormack. The world class Aussie Ironman is headed to New Orleans, where he's the poster boy for this year's Oschner Half-Ironman Competition. Slated for Sunday, April 18, the course runs from the UNO Lakefront Research Campus and makes a loop around the city on Elysian Fields and Lakeshore Drive. Registration for the race closed on Easter Sunday.

For Macca, the road to The Crescent City leads through Lafayette and to-where else?-Red Lerille's, where he'll give a talk at 7 pm on Tuesday, April 13.You don't have to be a member at Red's to come to this event, which is coordinated by Mark Miller of Precision Bikes, Ruud Vuijsters Physical Therapist and Smitty Mongoose' Smith. 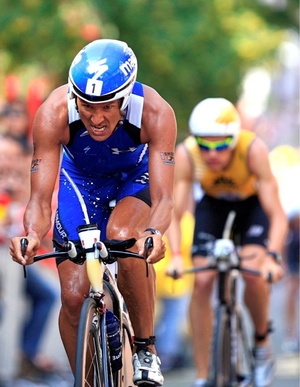 The 37-year-old Macca began competing on international-distance courses in 1996, winning both the 1997 Triathlon World Championships and the 1997 ITU World Cup Series. To date, no one else has won both titles in a single year. He won Ironman Australia every year between 2002-2006 and won the Ironman World Championships in Kona, Hawaii, in 2007 after six attempts. If you need a little inspiration for your personal fitness goals, don't miss the chance to sit in the room with this world-class athlete!