It was a big weekend for Lafayette's Jordan Daigle. On Saturday, the 15-year-old was playing the finals of his first-ever international junior tournament in Carson, Calif. Understandably nervous, Daigle - ranked ninth in the tournament - was down 4-0 in the opening set to No. 11 seed Thai Kwiatkowski of North Carolina. But the Lafayette native settled down and battled back to force a tiebreaker, saving two set points that sealed his confidence. The rest of the match belonged to Daigle, who defeated Kwiatkowski 7-6 (6), 6-1 to win the boys' 16s at the USTA International Spring Championships. 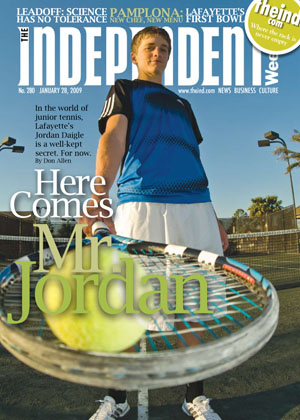 Daigle's win bumped him up to No. 28 in the country; he was ranked 96th going in. "That's a Level 1 national; that's as big as it gets," Daigle's coach Ashley Rhoney says of the win. The victory marked Daigle's second national title of the year, as he also won the Tennis Plaza Cup in Miami in February. "His record for the year is 27-3," Rhoney says. "It's pretty impressive."

At press time, Daigle was two hours away from opening play in the Easter Bowl in Rancho Mirage, Calif., another Level 1 tournament.

Jordan is the son of Robert and LeAnne Daigle. Read coverage of his weekend victory here and here. Daigle was featured in The Independent Weekly in January 2009.