The city of Broussard has headed off Lafayette at the pass in its bid to annex Les Vieux Chenes Golf Course.

The city of Broussard has headed off Lafayette at the pass in its bid to annex Les Vieux Chenes Golf Course, a city-owned property adjacent to the Broussard city limits.

Broussard Mayor Charles Langlinais confirms, and court records show, that the city of Broussard last week purchased two parcels of land near the golf course that were critical to Lafayette's annexation plan. By acquiring the land, Broussard effectively blocked Lafayette from reaching the golf course from the Ambassador Caffery Parkway South extension. In response, an ordinance up for final adoption approving annexation of the golf course by the city of Lafayette has been pulled from Tuesday's city-parish council agenda.

On April 15, Langlinais sent a map to Bill Fontenot, regional director for the state Department of Transportation and Development, laying out proposed annexation areas for the cities of Broussard, Lafayette and Youngsville. The administrations in Lafayette and Youngsville were copied on the map. In an attached letter, Langlinais urged Fontenot to set up a meeting with all the parties copied on the map to discuss annexations before today, Tuesday, April 20. Langlinais claims the Durel administration ignored the request. No meeting took place.

Sale records from the Lafayette Parish Clerk of Court's office indicate that Lafayette Parish resident Robert Carpenter purchased two parcels of land on April 12 from Karlan and Rosalind Gallet for $4,000. The next day, according to a separate document, Carpenter sold those same parcels of land to the city of Broussard for the same price. Those parcels of land were critical for Lafayette reaching the golf course contiguously from Ambassador Caffery South. According to LCG Chief Administrative Officer Dee Stanley, the Gallets had previously agreed to allow Lafayette to annex the parcels in order to reach Les Vieux Chenes, but within days of the sale sequence leading to Broussard acquiring the land, they backed out - at that point they had no choice; they no longer owned the land proposed for annexation.

Langlinais characterizes Lafayette's annexation along Ambassador South to reach the golf course as a Trojan horse that would allow Lafayette to gain control of a greater portion of unincorporated Lafayette Parish along the roadway - a stretch of road guaranteed to provide lucrative sales taxes in the future as Ambassador South is developed. "I sent a copy of the ... revised map last week suggesting, Hey, let's sit down with Bill Fontenot; let's work this out. You do your annexation, we do our annexation, end of story,'" Langlinais says. "Now I'm hearing they've taken the annexation off the agenda tonight because they realize they have a defective annexation, and they're telling us they think we have a defective annexation. The point is, sure, everbody's got problems. Why don't they sit down? If it is truly, truly about providing services or incorporating only Vieux Chenes, why don't they want to work this out?"

On Tuesday, Stanley had little comment about the turn of events. "Lafayette will continue to pursue its annexation policy," he says. "But Vieux Chenes is off the table."

Annexation, especially in south Lafayette Parish where Lafayette, Broussard and Youngsville are rapidly reaching each others' corporate limits, has been a source of enmity for more than a decade, especially between Lafayette and Broussard. Read The Independent's April 7 cover story, "Land Grab," for more on this contentious issue. 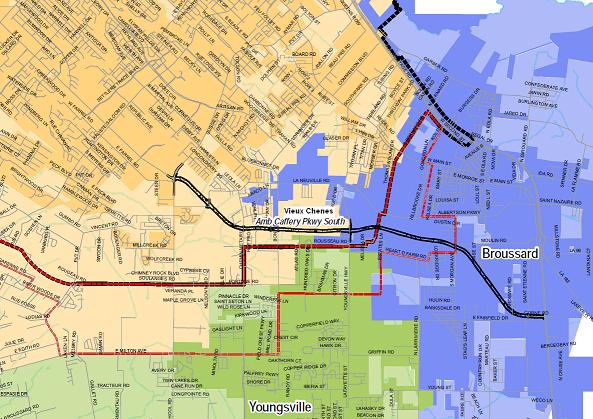