Striking a conciliatory tone, Broussard's mayor says he can work with his counterpart in Youngsville. But the feeling doesn't appear to be mutual.

Hoping to strike a deal with the city of Youngsville on the annexation of valuable land along the new Ambassador Caffery Parkway extension in south Lafayette Parish, the city of Broussard Tuesday pulled a pair of ordinances annexing an almost mile-long strip of land along the parkway between the Youngsville Highway and Bonin Road that overlaps a planned annexation by Youngsville (see map). Broussard's annexation ordinances also called for the city to take in larger swaths of acreage west of Bonin Road almost to La Neuvelle Road.

Broussard Mayor Charles Langlinais says he believes the two municipalities can find common ground. "I think we can come up with a plan that's good for both of us," he said Tuesday night after the city council meeting. Langlinais added that representatives of Broussard city government will attend a special meeting of the Youngsville City Council Wednesday evening to seek a compromise on their competing annexation plans. Langlinais said he envisions a compromise in which both municipalities annex according to their plans, but future businesses are positioned toward and back from the roadway so that both cities reap equal sales taxes.

However, Youngsville has already had petitions for annexations signed by the requisite land owners and registered voters in the proposed area and certified with the assessor and registrar offices. The assessor's office has not certified Broussard's annexation petitions, according to a source. And Youngsville Mayor Wilson Viator says his intentions haven't changed. "I plan to go ahead with our annexation as planned," he told The Independent Tuesday night. "The council needs to approve this for the good of Youngsville."

Youngsville's annexation plan includes a strip of land roughly 35 feet wide at the eastern edge that, if state law is interpreted to prohibit non-contiguous annexations - state law is evidently Byzantine and murky on the topic - Broussard could be blocked from annexing westward on the south side of Ambassador. 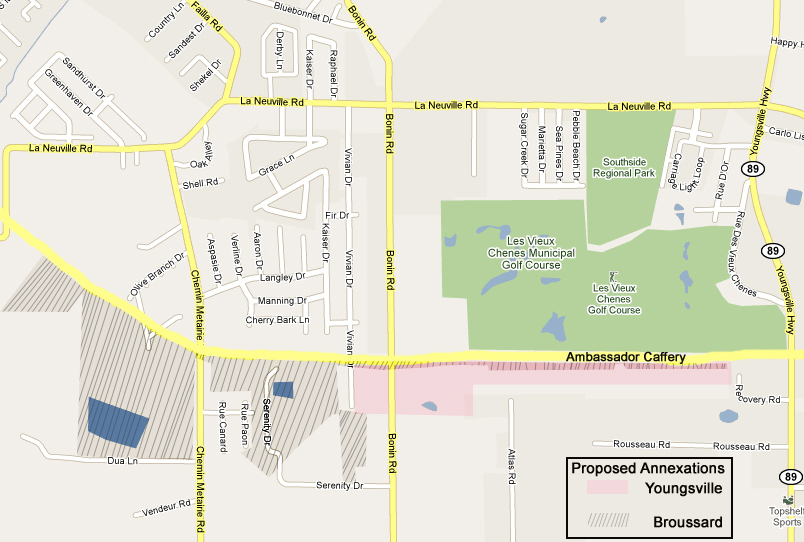