Mark DeWitt has been hired to start a scholarly study and degree program in traditional music at UL Lafayette. Nearly 14 years after the tragic, untimely death of Lafayette musician and pathologist Dr. Tommy Comeaux, after 13 Medicine Show fundraising concerts in his honor and the sale of thousands of CDs, posters and T-shirts - all for the singular cause of establishing an endowed chair in traditional music at UL in Comeaux's name - UL Lafayette has hired a California ethnomusicologist to make it a reality. Dr. Mark F. DeWitt will begin building the program, largely from the ground up, beginning in July. 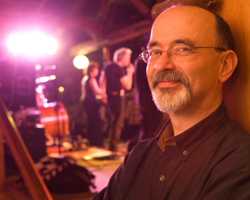 "A couple of things that need to get done that were clear from the start is that we're going to start a degree program in traditional music - a bachelor of arts program," says DeWitt, who spoke with The Independent Wednesday morning via telephone from his home in the Oakland, Calif., area. "With all the approvals that need to happen, that's probably going to take about three years before we really can start admitting students. I'll be working on that right from the start to make sure that happens in a timely fashion. Also the university has centers, there's a Center for Louisiana Studies, there's a Center for Cultural and Eco-Tourism, and so on. So now we're also going to have a center for traditional music - I'm not sure what we're going to call it - but we'll have a physical space for that, too. That's going to be pulling together resources that are already there - there's already so much going on there in Lafayette and the university of itself. This job's going to be a lot of connecting the dots."

The center for traditional music will bear Tommy Comeaux's name and, says DeWitt, its focus will be on the indigenous music of south Louisiana - Cajun and Creole - but it will be designed to accommodate a range of musical interests and will necessarily work with other departments at the university. "Just in terms of archival stuff, recordings, there's folklore stuff that Carl [Brasseaux] administrates," DeWitt says. "Then there's a Cajun and Creole music collection, which is commercial recordings, that's also in the library, and then there's the KRVS collection. And the people at KRVS have already been hospitable and let it be known that I was welcome any time to wander over there and hang out. So, I'm looking forward to working with KRVS as well."

Folklorists and language instructors at the university will also play a role in the education a student receives in the program, but many of the details have yet to take shape. That's what DeWitt will begin doing in July. "We're just getting off the ground; we're starting something new. For the bachelor's degree program, there aren't too many models," he adds. "There's leeway, but you also want to design a program that people are going to be interested in. So, with the bachelor's degree, I'm going to be trying to find students who will be interested in such a program, get them playing in ensembles and stuff like that even before they have a formal degree. The programs at the center will also try to involve people in the community."

DeWitt's hire is a dream realized by scores of people in the Lafayette area, the vast majority of them friends and admirers of Comeaux, a multi-instrumentalist who played with the ground-breaking Cajun rock band Coteau with Michael Doucet and was an early member of Beausoleil. Comeaux died in November 1997 when he was struck by an SUV while riding his bicycle. Within weeks of his death, a committee was formed - now called the Comeaux Fund Campaign Committee - to raise money and establish the chair in traditional music in his name. The first Medicine Show concert at Grant Street dancehall happened in December of that year featuring some of the top names in local music, among them slide-guitar virtuoso Sonny Landreth, who, like many in the community, has contributed his time and talent to making the Dr. Tommy Comeaux Memorial Eminent Scholar Endowed Chair in Traditional Music a reality.

"This is super exciting for everyone who's been a part of this since he died in 1997," says committee member Todd Mouton. "In a way we sort of never thought the day would come, but I guess on the other hand we have been bouncing ideas around, debating stuff, planning and implementing stuff, and now we have a guy who is an incredible talent who is going to be able to sort of collate and organize and create an action plan for all these great ideas people have."

The Comeaux committee has raised more than $600,000 to establish the chair, and with state matching funds, it's now a $1 million endowment that will continue to grow. Read more about the committee in our 2008 "Persons of the Year" cover story. "We're going to try to continue fundraising for this," says DeWitt, who currently works as an administrator in the fundraising office of the College of Engineering at the University of California Berkeley. "There was a lot of fundraising that went on to create this endowed chair, and we would like to continue in that vein but to switch from fundraising for the chair itself, which is in place, and start getting money for programs, scholarships, to hire more teachers, have people to teach fiddle and accordion and mandolin - whatever we decide we need in the program in terms of teaching lessons."

DeWitt, 49, did his undergraduate work at MIT in urban studies and planning. He later studied music theory at the New England Conservatory of Music before completing his doctoral work in ethnomusiciology at Cal-Berkeley. DeWitt also taught ethnomusicology and world music at Ohio State University and is currently president of the Northern California Chapter of the Society for Ethnomusicology. His has also been widely published in scholarly periodicals and books.

It was while an undergrad that DeWitt first encountered Louisiana music. "It was sort of a historical accident at first, which is to say that before I went to graduate school I was a blues fan and I happened to go to the blues club I went to in Boston, and Queen Ida was playing that night - she was on tour - and so then I heard zydeco, and I was like, wow," he recalls. Near the Berkeley campus DeWitt discovered a music club devoted to world music that featured Cajun and zydeco music several times a month. In fact, northern California is probably the most densely populated enclave of Louisiana ex-patriots, many of whom brought the music with them. "So that's how I got into it," he adds. "There I was in graduate school checking this out, and I didn't really have a dissertation topic and I said, Hey, why don't I do this?' and my adviser said, Good, go for it.' And I've been doing it ever since."

And while DeWitt's focus will be on Cajun and Creole music at UL, the Tommy Comeaux Center for Traditional Music will be broader than the bayou. "I will say my research focus has been on Cajun and Creole dance music, so I will certainly be focused on that, and that will probably be order of business number one, to make sure we can offer those things for students who want to do that," he acknowledges, but qualifying it by saying he foresees the center also becoming an innovative laboratory for traditional music. "I think we need to embrace that," he says. "I think there's definitely some innovation that's going to come out of this. We are a university, and we're going to be educating our students in a breadth of musical styles; they're going to concentrate in one, certainly, to gain mastery of it, is my hope. But nonetheless, they're going to be exposed to a wide range of things."

DeWitt was in Lafayette last week to finalize his contract with UL. He also taped an interview with KRVS Development Director Judith Meriwether. You can hear the DeWitt interview at 3:20 p.m. today on KRVS, 88.7 FM, and at krvs.org.