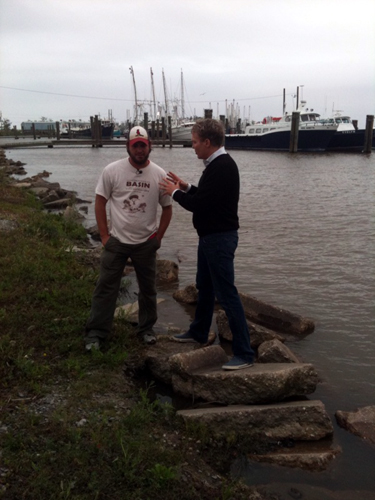 Before a Thursday night gig in New Orleans I spent a few minutes in Jackson Square. I thought about the helpless feeling I had watching the aftermath of Katrina from a hotel room, knowing my old National Guard unit that had help with past hurricanes was stuck in Iraq. So, before I left the Quarter, I looked up the Louisiana state volunteer Web site, which provided a toll-free number that turned out to be an environmental wing of British Petroleum.

I figured that if oil was going to hit the Gulf Coast today I needed to be there. So, I hitched a ride with local activist Valerie Gonsoulin and we headed south to meet a crew from Lafayette in Venice.

Sunrise came & there were no booms going out, no volunteers tents waiting, nothing that any of us could do.

We were greeted at the docks by Sam Champion from ABCs Good Morning America. He asked us about the volunteer effort we were attempting to organize. We let him know we were there to assess the situation and join the local grass roots movement we read about. Nine days after the well caught fire, minimal preparations had been made to protect Louisiana's precious coastline.

Ironically, the staging area for cleaning up wildlife is an abandoned Civil War post, Fort Jackson. Apparently the place that had been the cleaning area for Katrina sludge, but nobody was there. Next we went to a trailer that is Venice City Hall and talked to fishermen who were scared of losing their livelihood.  Just as bad as we wanted to get out on the water before it turned black, BP was hosting a hazmat class for volunteers at a local school and it was our only shot at getting involved. 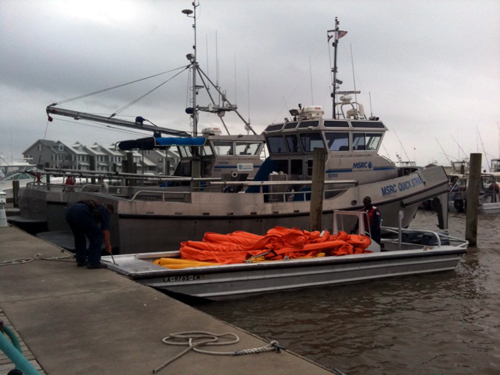 papers lawyers may put in front of you." Local fishermen and boat crews who volunteered to help with the cleanup were passionate about staging an effort to prepare for the inevitable. These are working folk; their only hope to make a living is to go to work for the very company whose is responsible for what John Goodman would call a "manmade catastrophe of epic proportions."

Outside, a BP spokesman claimed his company would take action and train local people for the cleanup. 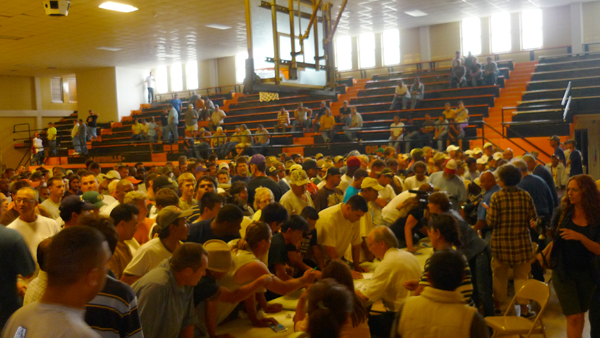 Fishermen queue up in a Venice gym to join the cleanup.

I sat next to local, Captain Richard Blink Jr., and he told me of his recent work planting cypress trees in the area while questioning the wisdom of holding up thousands of fishermen in a gymnasium on the eve of destruction. It became apparent that for whatever reason  little had been done to fortify the coast for the impending disaster.

Many speculate they may have been dishonest about the extent of the leak. As minutes ticked off the clock we waited for a plan, but realized this safety meeting was merely a way of covering liability. As Richard looked down at his phone he let me know the first line of hazy oil had hit the mouth of the Mississippi. It became apparent the time to cover the estuaries of southeast Louisiana was quickly slipping away. The only plan was to boost the local economy by hiring fishermen who are in danger of losing their livelihood to help with the spill.

There was a lunch break and kids were let out of school, an informal press conference began outside. We listened to the BP spokesman, David Kinnaird, tell the media it could take weeks to train local people and we realized it was to late. As Richard fought back tears of rage, we came to the realization nothing could be done to stop crude from washing ashore. I inquired about what work was done during the day to put out booms to protect the marsh and he said the wind and high seas had kept boat crews at the dock.

By mid afternoon, carpetbaggers had filled the town in the form of the lawyers. We were warned about salesmen pitching products. It was fitting that a large portion of the crowd couldn't speak English anyway. As worry and chatter spread, the speaker asked if any of the folks there might want to teach the class themselves. I learned not to wipe oil in your eye, the sweet smell of benzine will kill you, and caring for animals that have been poisoned by crude oil is not as easy as adopting strays after Katrina.

Hopefully we will get something done in the morning, But in truth lawyers won this day. We live in a country where you get sued for doing the right thing. Only a few boats left the docks to carry away reporters and do some last minute fishing.

The best quote I heard was from Valerie: "As for now it seems the only plan is to let the oil hit land and pay some local folks to wash a few birds."

What Can you do Acadiana? Learn from these mistakes and fortify our marshes now. God only knows when this leak will stop, but if we have any chance it lies in being prepared. From what I understand, if not capped there's enough oil to blacken the Gulf. Get the manpower and booms together now for the rest of our state. As for me, it will be awareness and getting volunteers with a real mission. I may not know exactly what it is yet, but waiting for greasy waves is not the answer. We may have lost this battle, but get ready for war.