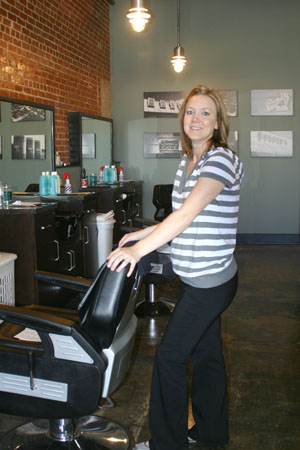 Renee Ezell in the hair salon at Refinery

Renee Ezell is the sister-in-law of Tsunami sushi bar owner Michele Ezell, and Refinery will open on the Buchanan Street side of the old Abdalla building, that houses Tsunami. The adaptive reuse of the old building plays up the rustic brick walls and concrete floors, polished to a high shine. Renee will offer hair cuts and beard trims, warm shaves, facials, manicures and pedicures, and massages.

Refinery is only part of the continued development of the building. On the ground floor, one commercial suite is also being rehabbed, and upstairs, approximately half a dozen apartments are being readied for residential occupancy.

Renee says there has been significant interest already. "Lots of guys have already asked about facials." An added attraction: there's a secret door that opens into Tsunami, prime access for a sushi snack for men making a spa day of it.