The Independent's Dege Legg transmits his transits from a monthlong East Coast tour. 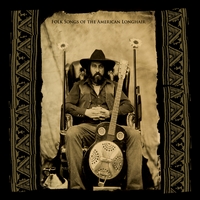 [Editor's note: Independent Weekly arts/entertainment writer Dege Legg is in the first furlong of a month-long music tour up the East Coast to Boston, west across the Upper Midwest and back down to Louisiana. His tour, in the guise of his latest musical persona, Brother Dege, is in support of his new record, Folk Songs of the American Longhair, a mostly solo undertaking featuring Dege on resonator guitar. He will be filing reports of his experiences from the road throughout the tour. This is the first installment. As best we can we've replicated the form in which Dege transmitted the data via Facebook. We have, however, defused a few F-bombs and otherwise made sure it is rated PG. Pray for Dege's safe return, and help support this important contribution to the American song book by buying his record at CD Baby.]

THURS. APRIL 29
NEW ORLEANS
Played KTUL.
Then rolled to
Bernard's house party. Way out in the hood. Marigny.
Pulled up in van.
Thugs on corner yell at me, "YOU A DEADMAN! YOU A DEADMAN!"
I wave at them and walk on.
People love death.
There should be a Kevorkian Fast Food Chain.
Death burgers.
Suicide fries.
Party was kind of a bust so I sat on the stoop
And played guitar with all the little black kids
Of the neighborhood.
They were so fascinated by the slide and dobro,
I let them play it and bang around on it.
They loved it.
Kids are the best.
They haven't turned into the monsters
That adults sometimes become.
Rolled out and slept in van in park. 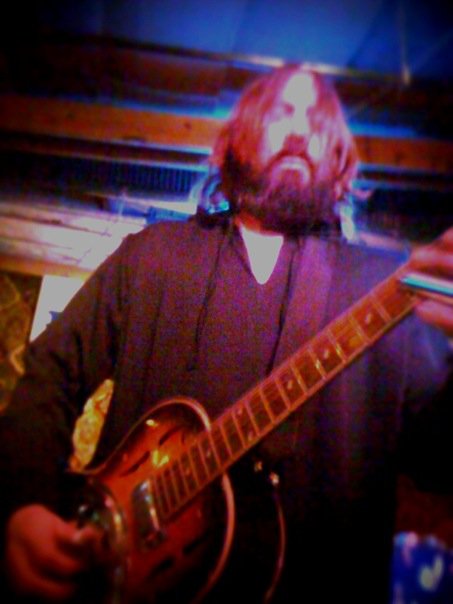 BIRMINGHAM, AL
Cool town, cool people, cool bar.
Can't say enough good things about this place.
I broke down and got a motel cuz I slept like sh** night before.
Slept walked into the window.
Woke pushing and shoving the curtains around.

SAT. MAY 1
ATL, GA
Hot. Sweaty.
Was 30 mins ahead o schedule
Then hit gridlock.
45 mins to travel two miles.
Made it to radio/video thing.
www.indieatl.com
Matt & Crew = good dudes.
Shot 4 or 5 songs.
There was a park behind me where all the hobos
And street people hang out.
I asked one of the handheld cameramen if
he wanted [to go] into the park with me and hang.
Boom. next thing you know, we're playing and hanging
with local old timers.
One guy played a song on my Dobro,
And he KICKED ASS.
Black folks got a lot of soul.
Rolled to club.
Made a new best friend right away,
First dude I talked to, Jay Russo.
From Athens, Ga. Good dude.
Hung, drank two Vodka/7s and called it quits
After two more beers.
played show in a small club downstairs from main club.
Separated by staircase. LOUD upstairs.
It was a volume war between me and the upstairs bands.
I lost.
Hung with my new buddy Jay + Paul and Adrian from The Starbar.
About 1 a.m.
Crashed out.

SH** CREEK AGAIN
May 2
Woke. Cranked van.
Noticed it was cranking slow.
Rolled out of ATL
Then noticed the power/battery meter
Was dipping down and dropping fast.
Can only mean one or two things.
Dying battery or dying alternator.
Made it to next exit.
Pulled into Comfort in Parking lot and van died
right there, middle of parking lot.
Indian owner of motel
came out. Told me, "You must move this van. You are blocking way.
I call POLICE!"
Nice.
The gods love to mess with my Mind sometimes.
Got a guy to jump the van.
Rolled to an Autozone and changed the battery
in the parking lot
Amongst all the local Georgia hayseeds,
Who are pretty rad, by the way.
They love Christian radio
And don't sweat the fact they're missing teeth.
I admire that..
That's gumption.
Cranked van. Meter still dipping and low.
Alternator dead and its sunday.
No place open.
Everybody in Georgia is drunk, BBQ'ing in their backyard,
or in church.
I roll back to Comfort Inn where Indian owner
threatend to call police.
It was the only hotel in Jefferson, GA.
I made friends with him and gave him plastic.
He smiled.
Modern rituals.
I unload my crap, go to room, and plop down on bed.
then I go back to van to grab something.
Open back door. 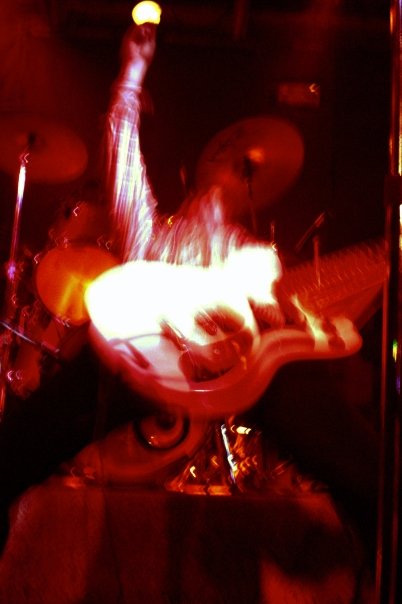 Something is missing.
It's too roomy in back of van.
Where's my amp?
Dig around.
HOLY SH**!
I forgot my $1500 Mesa Boogie amp head
Somewhere at the club last night!
I'm such a retard.
Lovely.
Dead van and now I have no amp.
i don't remember what I did with it.
I could be in the club.
Somebody could have jacked it.
or i left it sitting next to van in parking lot
and drove away.
I mentally flagellated myself for being such a space case.
The gods LOVE messing with my MIND!
i get on phone.
Call all the club folks.
Cancel show in Charlotte with my buddy Gideon Smith.
2 hours later I get the call that my amp is in club office.
Bartender grabbed it.
Nice. Thank you.
I spend rest of the night, cussing at myself, the van,
and the gods.
Then I watch TV
And slowly drift off to sleep,
Wish i were immortal and careless
if only for a fraction of a second.

MON. MAY 3
DAMAGE CONTROL
Busy day
Wake at 7 a.m.
Call Auto repair places.
Find one who will tow van to their garage.
Nice folks.
it's raining all day. Flooding in places.
It's beautiful.
I wait two hours for tow truck.
Finally comes.
Roll to garage.
3 hours and $500 later the van is fixed.
I make arrangements to meet
Brian Malone, the Starbar's booker, at the club
to grab my amp.
Back track 1.5 hours back to ATL.
Wait around.
Take a nap in back of van.
he shows and I grab my amp.
I'm back in the saddle again.
Almost broke, but i feel good.
Pulled two rabbits out of the hat.
One of the gods.
and
One of my own making.
I make a vow.
I will never again obnoxiously and boisterously claim to have my sh** together.
But I will enjoy the ride.

ROAD. NIGHT. MAY 3
I drive off into the night.
Pull over in South Carolina.
Shower in a Pilot Truck stop. $10.
Park van in the back lot with all the truckers.
Pensively smoke a cigarette, while listening
to the thresh and swish of I-85 going by.
I make my little bed in the back of the van.
Contemplate the days events.
And lay my head down to sleep.