Our intrepid Dobro brother continues his musical journey up the Appalachian Trail. [Editor's note: Independent Weekly arts/entertainment writer Dege Legg is in the second furlong of a month-long music tour up the East Coast to Boston, west across the Upper Midwest and back down to Louisiana. His tour, in the guise of his latest musical persona, Brother Dege, is in support of his new record, Folk Songs of the American Longhair. Dege is filing reports of his experiences from the road throughout the tour. This is the second installment.] 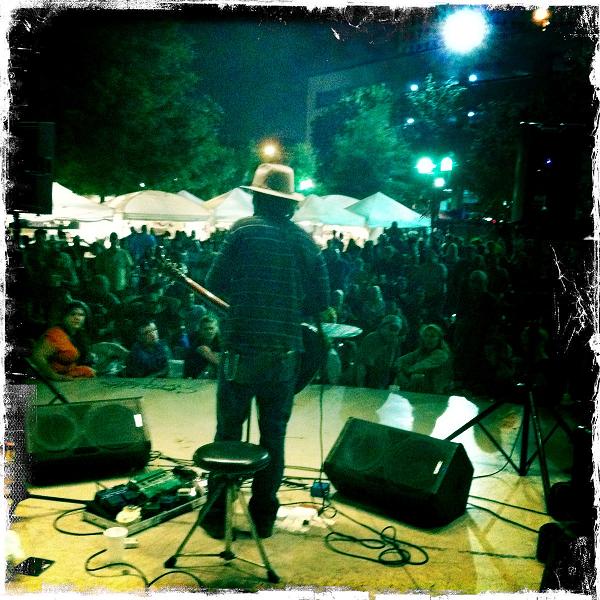 5.4.10
Somewhere in North Carolina
After the madness of the van dying
And me forgetting my damn amp back in ATL,
I could finally relax.
Because the worst was over.
Now it was time to enjoy the ride.
I hit Winston-Salem, NC on a mission.
Got wrong directions to club.
Ended up in ancient, abandoned warehouse district.
Nothing but pre-war decaying factory buildings
With cracked teeth broken windows
And brick covered with the dust of another era.
Kooky pigeons flapping over head.
Pretty eerie place.
Ghosts of the industrial age when robots were just a dream.
I knew this could not be the club.
Or maybe it was, who knows?
I drove around till I found it on the other side
Of downtown Winston-Salem.
As I pulled up to club,
I see the other band
Unloading their gear from car.
Punk rock & roll band from Pittsburgh.
http://www.myspace.com/atomicdrops
The Atom Drops.
Black T-shirts, tattoos, etc. Good dudes.
I pull up in the Black Bayou Ministry van.
"What's up, dudes."
Never fails, that vanfor weird reactions.
I play.
Good set.
Sold a bunch of CDs.
The Atom Drops play they're a good rocking band.
And more importantly, pretty good dudes.
Night ends.
Alcohol. People wandering off.
I load up, climb in the van, and drive off into the black unknown
Of North Carolina.
I drive two hours
With the wind whipping, my head swirling,
My eyelids growing heavy.
I finally find a truck stop.
Pull in.
Park.
Climb in the back of the van
And quickly fall to sleep.
Not much glory for the rock & roll lifestyle.
But I like it.
But I sure miss my baby at home.

5.5.10 Thornburg, VA
HOW TO LIVE IN YOUR CAR (or van)
1. Have a place to pee. If you're a dude, an empty Planter's Peanut Jar will do my preferred method.
Or a large Gatorade bottle. Women, bring a bucket or park near a public restroom.
2. Eat potato chips. When hunger strikes at 4 a.m., you can reach for the bag of Doritos
stashed under the seat. Trail mix works, too.
3. Block out the windows. Sleeping in your car isn't so bad, but when morning comes, the cool, night air turns hot and muggythus preventing sleep. Fashion some curtains out of vinyl
banners or fabric. Or use a few of those windshield reflector things to block out the sunlight so you can sleep an extra few hours.
4. Don't drink too much. Might lead to embarrassing situations where you create a public
disturbance in the parking lot of Pilot Truck Stop. Thus risking arrest. Best to avoid all that.
5. Find places to shower. State Parks and truck stops are the best. At truck stops, you can buy
a shower for $10. Camping lots, which usually have shower facilities, are equally rocking. In
addition, you get vibe with nature and dig trees.
6. Divide the car/van into sections, much like a house or an apartment.
Driver's seat = front door,
Passenger seat = living room
Back seat = kitchen, bedroom, and bathroom.
Trunk = attic, backyard, and closet.
Glovebox = entertainment center
Front hood = dinner table
Rear bumper = smoking lounge
7. Avoid sleeping in your car in populated areas where there is a lot of foot traffic, like
residential neighborhoods. The natives get weirded out when they go for their afternoon walk
and see your dirty ass sleeping in the front seat. Middle class people might want to help the
homeless and transient population on occasion, but they don't want'em sleeping in THEIR
neighborhood. Not cool! They'll call the cops on you quick, because they figure you're a dirty
drifter with nothing to losejust like in the movies they watch.
8. Don't ever try to poop in your carlike in a bucket or something. Always go in a public
restroom or the woods.
9. Bring books to read during dead time. After a week of living in your car, you will start to feel
like a loser and will need self help books and the like to keep your spirits up.
10. Make friends with people, keep an open heart, and keep a bat or knife ready in case mean
people try to pull something fishy on you. Good luck.