Baton Rouge-based Walk-On's Bistreaux and Bar, a concept founded by two former LSU basketball players (both walk-ons, of course), is opening a 9,500-square-foot restaurant and bar on Kaliste Saloom Road next to Randol's. The new location will be the eighth restaurant for Brandon Landry and Jack Warner, who met in 1997 on the hardwood of LSU's Pete Maravich Assembly Center...

Baton Rouge-based Walk-On's Bistreaux and Bar, a concept founded by two former LSU basketball players (both walk-ons, of course), is opening a 9,500-square-foot restaurant and bar on Kaliste Saloom Road next to Randol's. The new location will be the eighth restaurant for Brandon Landry and Jack Warner, who met in 1997 on the hardwood of LSU's Pete Maravich Assembly Center.  Landry says the total Lafayette investment, from the land to construction and furnishings, will approach $3.6 million. The Kaliste Saloom real estate transaction was brokered by Ryan Pécot of Stirling Properties.

The concept for Walk-On's was actually born on a basketball road trip. While traveling throughout the SEC, the team often visited restaurants and bars - market research for the ambitious restaurateurs, who sketched the first concept on a napkin in an airplane flying back from the University of Tennessee. In 2003, Walk-ons opened its doors on Burbank Drive near Tiger Stadium. "Our saying is everyone needs a little playing time," Landry says. "It's a double meaning in how we were walk-ons and really didn't get a lot of playing time, and then it's just a fun place." Riding the success of Walk-On's the duo has since launched three more concepts: Happy's Irish Pub, Schlittz & Giggles (a pizza joint) and The Roux House (nightly live music).

Two locations of all but The Roux House, which is located in downtown Baton Rouge along with a Happy's and a Schlittz & Giggles, are operating in the Capital City; Lafayette is the group's first expansion outside its home base. "We've been shopping Lafayette for about two years now," says Landry. "Lafayette's a great market because there are not a lot of [restaurants] that compete with us directly. " 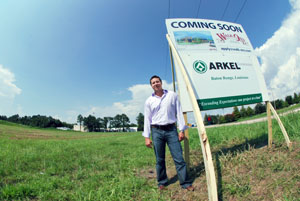 Landry (pictured at left) and Warner have now set their sights on downtown Lafayette, for a potential expansion of one of their other concepts.

And while LSU paraphernalia dominates the existing Walk-On's, Lafayette's theme will be "a house divided," Landry says, to reflect the support both universities share here. "We are going to do probably about 50 beers on tap; we're going to put some different beers you might not be able to get anywhere else," he adds, noting that the restaurant will also have an outdoor climate-controlled patio area with a separate bar (featuring garage doors that can be closed during inclement weather) and a 40-person private dining room. The restaurant will seat about 300.
"We cater to just about anybody. Kids love the place," Landry says. "The menu is a mixture between sports grill food and Louisiana fare - you can get your wings and burger or you can also get stuffed shrimp, gumbo, étouffée. And we have specialty dishes. The food sells it for us."

About 120-150 jobs will be created initially, according to Landry, with roughly 100 of them permanent jobs - 40 percent of which will be full-time.

Walk-On's hopes to open near the first of the year.

COCHON ON THE BAYOU

For proponents of the pig, good news on the culinary front.

Chef Donald Link will be opening a second location of his dynamite New Orleans restaurant, Cochon, here in Lafayette.

Link, along with Stephen Stryjewski, his co-chef and partner in Cochon, have put a quietus to the rumor mill circulating around Lafayette for months by purchasing property along Bayou Vermilion in River Ranch, right next to the Camellia Boulevard bridge. They plan to break ground in the fall on a larger restaurant than the one in the Warehouse District of New Orleans, which will include a huge outdoor deck overlooking the river and space for a garden.

Link comes from an extended German-French family centered on the Cajun prairie around Eunice. His cousin, Bubba Frey, owns the Mowata Store, a renowned boudin stop, which smokes some of the best sausage in Acadiana. Link makes extensive use of that smoking tradition in his upscale Cajun cooking.

Most dishes begin with bacon Link cures and smokes himself. It's an astonishing elevation of commercial bacon, deeply smoky and containing none of the water that adds weight to grocery store packages. From there, Link plays with a hundred variations on Cajun cooking, serving up everything from fried rabbit livers with pepper jelly to heart-stoppingly good chicken and dumplings. His seafood dishes, like a beautiful shrimp, corn and tomato stew, concentrate the essence of summer flavors with a traditional one-pot technique.

While we wait for Cochon on the bayou to open, it's well worth buying his cookbook, Real Cajun, to try out Link's take on our homegrown cuisine. Real Cajun was this year's James Beard cookbook award winner, beating out the other New Orleans celebrity chef's contribution, My New Orleans, by chef John Besh.

Summer's also a good time to make an eating foray to the Big Easy to get a preview of what's coming to Lafayette. Cochon is located at 930 Tchoupitoulas St. - Mary Tutwiler

Vascocu has big shoes to fill. Yuan, who replaced Pat Trahan as Lafayette market president four years ago, quickly immersed himself in the local community and was often the face of the company in the place of IberiaBank President and CEO Daryl Byrd, who prefers to remain behind the scenes. Yuan was the 2011 chairman-elect of the Greater Lafayette Chamber of Commerce and actively involved with several community organizations and initiatives.

"Lafayette has been a truly wonderful place to call home," Yuan says. "And my family thanks this community for their warmth and support."

A native of Ruston, Vascocu served as president of the company's Little Rock, Ark., market for the past three years, having previously managed the commercial banking team in Baton Rouge. Before joining IberiaBank, he worked for AmSouth Bank. - Nathan Stubbs

Compiled and edited by Leslie Turk; e-mail her at [email protected]

Baton Rouge-based Walk-On's Bistreaux and Bar, a concept founded by two former LSU basketball players (both walk-ons, of course), is opening a 9,500-square-foot restaurant and bar on Kaliste Saloom Road next to Randol's.