For now, Vermilion Bay is clear of oil, and the Cypremort Point shrimp season is in full swing. Morning comes early in midsummer. Five o'clock on June 15 and the sun is beginning to rise over the long vista of sugar cane fields in St. Mary Parish on the way to Cypremort Point. The round disk of the sun is as red as a sliced beet, gorgeous against the pink and gold eastern sky. 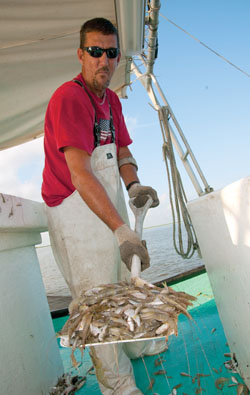 But that's not the direction Rodney Olander faces. He's looking west, where Marsh Island rises like a floating cloud on the surface of Vermilion Bay. The motor of his 36-foot skiff throbs with a steady beat, not unlike the beat of his heart, while he prepares for another day of shrimping. Another day is what he asks for, each day, as he tries not to think about the threat of oil from the Deepwater Horizon riding in on the tide, fouling the waters of Vermilion Bay, where his family has earned its livelihood for four generations.

What would he do if the oil comes in? "I have no idea," says Rodney. "If the oil comes here and we're shut down, I really don't know what we're going to do. It's a hard pill to swallow if you can't get out on the water."