City-Parish Councilman Purvis Morrison qualified on Wednesday to run in the October election for mayor of Scott.

[Editor's Note: When this story was posted Wednesday evening, Morrison was the only candidate to have qualified. On Thursday morning, Percell Glaude also entered the race for Scott mayor. Some content has since been edited out of the story to reflect that change.]

City-Parish Councilman Purvis Morrison qualified on Wednesday to run in the October election for mayor of Scott. The Scott native's bid is not unexpected; Morrison indicated his intention to seek the seat nearly a year ago. Incumbent Mayor Hazel Myers, now in her fourth term, has decided to retire. 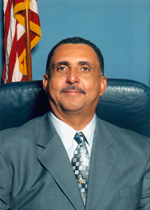 "It's been a dream for me to have the opportunity to represent the city of Scott, where I grew up, all my roots, my mother, my father, my grandfathers, they're all buried there," Morrison says.

If Morrison wins, he'll have to resign his District 1 seat on the CPC - he would be sworn in as Scott Mayor in January. Because less than a year would remain in the term before the November 2011 council elections, a replacement could be appointed to fill the unexpired term rather than hold a special election.

According to biographical information on his council Web page, Morrison is also a contract bus driver for the Lafayette Parish School System and is a licensed barber. He is a graduate of Acadiana High School and previously served on the Scott City Council, during which time he developed an interest in serving his hometown as mayor. "When I first got involved I really didn't think about it right away because I didn't know if I was going to like that type of work," he says. "But in my third year I definitely started considering that when Hazel would retire that I wouldn't mind doing this. And now that opportunity has come, so I say this is the best time to go."