Dozo Japanese restaurant heats up hibachi with a difference. 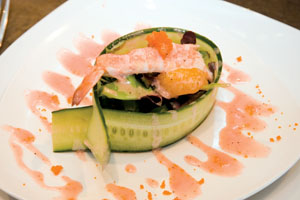 Hibachi is pure kitsch. Juggling, wisecracking grill chefs chink out tunes with the edges of their spatulas on the grill, flipping eggs into their toques and setting the cooking oil on fire. Suitable for a kiddie birthday party, the food is pretty standard, fried rice made right on the grill, steak and shrimp with soy or teriyaki sauce, and a bowl of coconut ice cream for dessert. It's dinner table entertainment best appreciated with a Sapporo or two under your belt.

That was before Dozo opened its doors. Owner Alan Yen, who has been serving superb sushi and hibachi at his restaurant Shangri-La for the past 10 years, decided to re-imagine the hibachi experience. Every element, from the appetizer starter, soup, salad and especially the sauces that accompany the seafood dishes contribute to an East meets West flavor profile.

First impressions are important, and Dozo really delivers with elegant Japanese design. Flagstone floors lit in blue, undulating ceiling joists glowing red, ichiban flower arrangements, oriental balance and restraint: It's enough to make you put an orchid in your chignon and play "Madame Butterfly" on your way to dinner.

The bar is an elegant way station between the hibachi room on one end of the restaurant, and a new sushi dining room that will open in about a month. There's a nice variety of sake, including Zipang, a sparkling rice wine, and several Asian influenced martinis like the Tyku Ginger made with Tuku-flavored sake, as well as a lychee and pear martini.

Most of the new hibachi dishes were conceived by Yen's son and chef, Michael Yen. "I took a standard hibachi dish, shrimp with a butter sauce, and added an exotic flavor, passion fruit," says Michael. "It's different, unexpected."

As is much of the fare.

The appetizer trio is a visually beautiful dish, with a broad variety of tastes. A soupcon 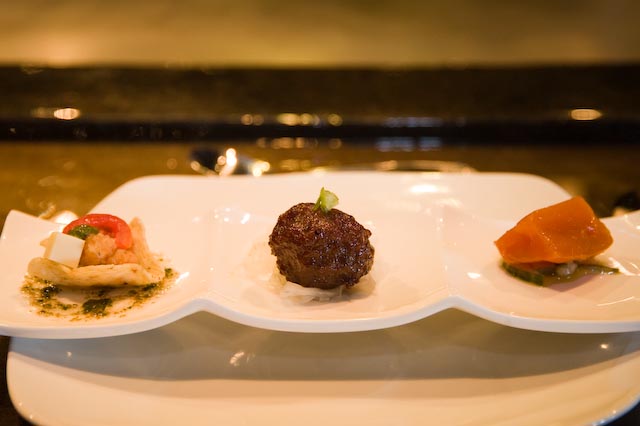 of sweet sweet sweet potato over a crunchy cucumber relish, a teriyaki-infused mini meatball, and a tiny tortilla cup filled with smoky salmon tartar, pesto sauce and a to my taste unnecessary cube of pepper jack cheese comprise the East/West theme.
Soups go beyond the traditional miso soup bowl. There's a New World chicken and corn bisque, a French inspired rich beef onion soup, or my favorite, the Asian leaning smoky seafood noodle consomme, a light broth with a wallop of flavor.

The early courses have to compete with the flaming spectacle in front of them as the hibachi chef plays with your food. Be ready for puzzles like the egg in the shot glass and the dollar bill and quarters topping a bottle of beer, excruciatingly bad puns and accomplished displays of juggling with eggs, forks and spatulas. Flying eggs quickly scramble, mixed with grilled Chinese sausage and pineapple infused rice, combined and sauced with a house soy. The cooking demonstration evolves into the best fried rice in town.

The main course requires an intimate exchange between diner and chef. You're not only asked how you like your steak cooked, but you get to watch the process and kvetch if you think it's overheating from medium to well done. Dozo offers hibachi standards like steak and shrimp, but there are some novelties on the menu as well. 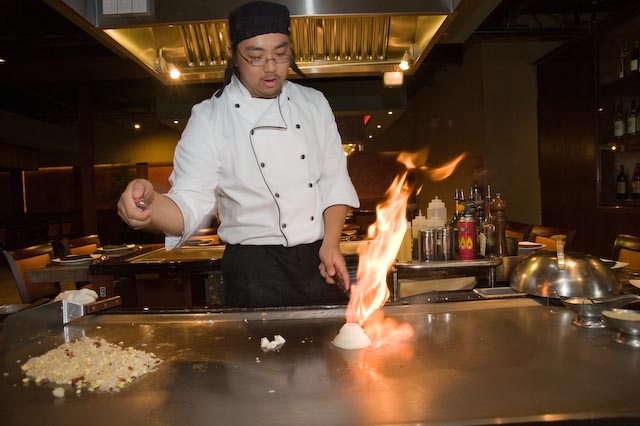 Michael Yen's take on Cajun palates is the Dozo Steak Roll, four paper-thin slices of ribeye rolled around a litany of ingredients. Number one is masago (smelt roe) and lettuce. Two encircles jalapeño pepper jack cheese, three is stuffed with grilled andouille, and the fourth is filled with paté. I found the dish a bit overwhelming with its assault of flavors and the beef, by necessity, turns out well done.

Best bet is the Brandy Duck Breast, grilled medium rare, sauced with a flambé of brandy and teriyaki reduction, and garnished with slices of grilled apple. The dish shows restraint and a nice awareness of classic flavors. Or go for the mustard-glazed salmon, which comes with a sweet kiwi cream sauce, to be used with discretion, on the side.

Excellent sushi is available as well. Currently it comes zipping over from Shangri-La, 50 steps away across the parking lot, although once the sushi bar opens in Dozo, look for innovation with raw fish combinations as well. Alan Yen says when he decided to go with a high-end Japanese concept, he chose to build his new restaurant right next door because he wanted to be hands-on in both places. "It's vital for a successful restaurant," he says, "for the owner to be on the premises."