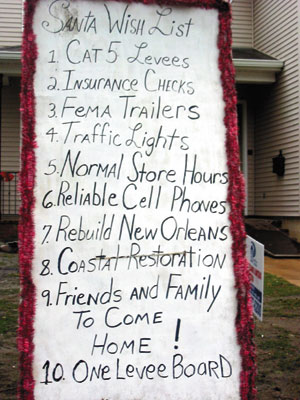 Just before Christmas, the Louisiana Press Association sponsored a tour of New Orleans. We drove to the airport and boarded Black Hawk helicopters for a fly-over to West End Marina and then across the muted, grey city to St. Bernard and Plaquemines parishes. The choppers dropped us at Jackson Barracks, which sits in the middle of the Lower Ninth Ward, for a briefing by Louisiana National Guard General Hunt Downer and his front line troops. We traveled a few blocks by bus to the Industrial Canal levee breach where rows of homes were washed away like toothpicks and an enormous barge was swept over the river's banks. Its rusting hull still sits on top of a bright yellow school bus, and it will be there for a very long time.

The next day my husband, Steve, and I drove to Lake Vista, a tiny enclave near Lake Ponchartrain where, in the wake of Hurricane Katrina, he led a search and rescue boat lift for some friends who live there. Their homes were high enough in the New Orleans bowl that they didn't flood. But most of the rest of the large, comfortable Lakeview neighborhood sits vacant now, marked by high water and the orange paint that confirms a soldier's search for survivors.

Many high rise hotels and office buildings in downtown are giant, hulking checkerboards of blown-out windows, their exact fates uncertain. Most traffic signals are out, even some in the Central Business District, so driving requires great care. At night, there are huge black holes in the city where businesses and neighborhoods used to be, and driving through them is surreal. National Guard troops remain to help patrol Bourbon Street.

We spent four days in the city and parts of it are bustling again, but the pace is much less frenetic now for those who live in the city (and much worse for those who commute to the North Shore). The current population of New Orleans ' as best they can estimate ' is about that of Lafayette. It has a small town feel, and you often run into people you know. We found James Williams, formerly of Lafayette's à la carte Restaurant and Catering, shuttling box lunches out the service door at K-Paul's Louisiana Kitchen on Chartres in The French Quarter, where he has worked as special events director for two years. Last month he was photographed washing dishes as part of a story in USA Today about the shortage of workers in the city. "We finally hired some dishwashers two weeks ago," he said. "We've been doing it all. It's been tough." Later, as we left Napoleon House after lunch, Roger Drake walked in. He retired from Lafayette Consolidated Government's department of community development earlier this year and is now a volunteer inspector for the city. "They had to lay off over half the department [in New Orleans] because of budget cuts," he told us, "so I came down to help."

In often tiny steps and sometimes bigger starts, businesses are gradually opening their doors around the city, often with limited services. Many schools and colleges are re-opening in January ' an astounding 86 percent of Tulane co-eds say they're coming back ' and Mayor Ray Nagin estimates 100,000 new people will soon return. After seeing the devastation, it is a mystery to me where they will live. But it is important for them to come home.

It's equally important for us to support the rebuilding effort in any way we can. Keep up the pressure on elected officials, especially in Washington, D.C. And remember: the revival of the tourism business is especially critical to New Orleans' recovery, and most hotels are open. Restaurants, too. I encourage you to go ' with your family, business or convention. The Quarter, CBD and Uptown are doing just fine. But drive around the city. Neither words nor pictures can truly tell the tale. You need to see it for yourself.