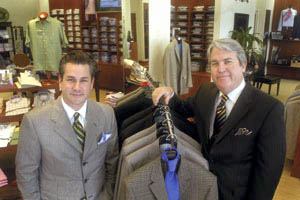 Moseley & Hollard, the River Ranch men's clothing store, has been open only seven months but is already set to expand by adding a new shop for women. "Our business is going very, very well, and we feel River Ranch needs a nice ladies' store," says Joe Moseley, who owns the business with Roy Hollard.

Elle by Moseley & Hollard will have contiguous windows but a separate entrance along Camellia Boulevard as well as a separate entrance from inside the lobby of The Onebane Building. Moseley says the 2,800-square foot store will carry accessories and gifts as well as clothing lines that range from resort casual to dressy. "We call it classy, contemporary elegance," he says, adding that in-store alterations and individualized customer service will be part of the package.

The manager and buyer are yet to be announced. Rob and Jan Davis are designing the logo, and Pecot & Company is the architect on the project. Moseley says the likely target date for opening is October.

a la carte Not for Sale

One of Lafayette's premier caterers is dispelling rumors that he has sold his business. "In the last eight months, I've been approached by three different potential buyers, including one from Texas," says owner Michael Doumit. "But as we got close to closing the deal each time, I decided I wasn't ready to sell."

Instead, he has made some personnel changes. Rod Latiolais, who has worked with Doumit off and on for 15 years, has returned from a recent stint at Hotel Acadiana to accept the new position of operations manager. Doumit also promoted long-time business manager Sue Hollier to general manager. As for the departure of Juan Herrera, who is married to Doumit's niece Allison, that was a mutual decision. "We're a close-knit family, and we just agreed to go separate ways," says Doumit. "He has two young children and a family, and when you're running a restaurant and catering business, you're working 12-14 hour days." Herrera has joined Panacea Products (soon to be renamed SeaBlue Vitamins In Motion) in international marketing.

Expect some cosmetic changes as well. Architect Larry Guidry has exterior renovations on the drawing board along with plans to relocate the business offices, making the restaurant larger and more airy. A Sunday lunch is also being considered. Doumit says he has survived a substantial loss of business from Hurricane Katrina. Reports of the potential sale have also cost him some bookings on the catering side, but he says he's made up for it. As for the restaurant, "I'm packed every day," he says. "I don't understand it. I have no parking. There are 2 million new places to go, and I'm still packed."

Jaci Russo and her husband Mike have bought and renovated the 8,000-square foot L.O. Peck Building downtown behind Teche Drugs and moved Russo Ad Group to the new address. Two remaining suites in the building will be rented to other tenants. The main hall is designed as an art gallery and Russo plans to offer exhibits for the monthly ArtWalk. Architect David Courville, interior designer Todd Zimmerman and Rachal Construction collaborated on the overhaul.

Jaci says a growing business and staff prompted the move. Recently Amy Jones left Rep. Charles Boustany's office to join Russo as media relations and political director. Public relations veteran Lee Ann Broussard signed on as well. In addition to advertising, marketing, media training and analysis for clients, Russo has developed lafayettemusicspace.com in conjunction with Cynthia Simien, a tireless promoter of indigenous Louisiana music and wife of zydeco musician Terrance Simien. "It's a resource for artists to find out about marketing, legal and other specialized business services," explains Jaci. "And we're working with Gerald Breaux [director of the Lafayette Convention and Visitors Commission] to use the site to bring recording and film projects to Lafayette."

Kay Jewelers opened its doors at the Center Court of The Mall of Acadiana last Friday. Kay's parent company is Akron, Ohio-based Sterling Jewelers Inc., which has 1,221 stores located in all 50 states employing over 15,000 people. Sterling is the U.S. division of London-based Signet Group, making it part of the largest specialty jewelry retailer in the world.

Associated Travels On Down the Road Robbie Bush, president of Associated Travel, has moved his company from the Oil Center into the shopping village near the cul-de-sac on Rena Drive, across from Little Verons. In a recent e-mail, he aptly describes the new location this way: "For those of you not familiar with the now famous 'W. Bayou to Camellia Speedway,' Rena Drive is parallel to Camellia Boulevard." I drive it every day, Robbie. It'll be nice to have a place to drop in for coffee while waiting for the traffic to clear.