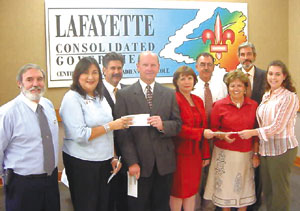 I walk or drive through The Longueuil Intersection at the corner of Buchanan and Vermilion streets almost every day. Such signage commemorating Lafayette's many French and Canadian sister cities dots the downtown streetscape, expressions of friendship with the intent for continued cultural and increased business exchange. It's a polite diplomatic custom; thankfully, it's a bond that our twin cities take very seriously.

According to a report from Le Centre International Director Philippe Gustin, more than $360,000 in cash and perhaps as much as $100,000 in relief supplies has already been generated for post-hurricane relief in Acadiana from these and other cities. And that amount is still growing. On Monday, Nov. 7, Zachary Richard will join French superstar Francis Cabrel in Paris for a nationally televised fundraiser that is sure to substantially increase the numbers. Richard has also been responsible for several of the large fundraising events in Canada, with monies being channeled through The Community Foundation of Acadiana.

Earlier this week French Ambassador Jean-David Levitte hosted a reception at the embassy in Washington, D.C., for the many French companies that donated hundreds of thousands of dollars for Katrina disaster relief in Louisiana. The final tally on giving from the Francophone community could eventually exceed $1 million, a substantial portion of it directed to Acadiana from our twin cities in France, Belgium and Canada. Who could have imagined that the twinning ceremonies fostered by former Director of Community Development Phil Lank more than 20 years ago would come to serve us so well today?

In Memoriam of Peter Vallot Jr.

One milestone overshadowed by the natural disasters this fall was the passing of Peter Vallot Jr., of Abbeville, who died in mid-September after a long battle with Parkinson's Disease. Peter was an educator who was the first to bring Head Start to Acadiana and a civic leader who helped establish The Southern Consumers Cooperative in the mid-60s to promote economic and social development among the local African-American community. Driven by a strong entrepreneurial spirit, he later founded several companies over a 20-year span, including Am-Vak Corporation, which earned him a profile in Black Enterprise Magazine in 1976. Peter also played a pivotal role settling the race riots at Abbeville High School in 1972 and in easing tensions in the racially polarized community following those incidents.

The closing of Abdalla's is also a milestone, not only for Lafayette, but for all of Louisiana. Consider the many fine family-owned department stores throughout the state, from Selbers in Shreveport to the Sternberg's Maison Blanche in Baton Rouge, that have long since succumbed to the trends of modern retailing. The Abdalla family outlasted them all and closes this chapter with the grace and integrity we've come to expect from Acadiana's most identifiable brand.

In River Ranch, new restaurants and retail offerings are plentiful. Paul's Jewelry opens a second location this week on Camellia Boulevard, and The Bonefish Grill fires up on Monday, Nov. 7. In recent weeks MidSouth Bank, Moseley and Hollard Menswear and Julie's Etc. have all started serving customers on the ground floor of The Onebane Building on Camellia Boulevard at Silverstone. Across from CC's Coffee in The Crescent, Café Roma is now hiring and will open soon. IberiaBank has broken ground on a new location at the corner of Martial Avenue and Settler's Trace, one of 12 new branches now under construction around the state. The bank's new Broussard branch has its grand opening next week.

Further down Kaliste Saloom Road, The Great Harvest Bread Co. is now open Tuesdays through Saturdays with awesome everyday offerings and a rotating group of specialty breads and sweets each day. Try the pumpkin swirl and work your way through the rest of the satisfying selections ' what a treat!