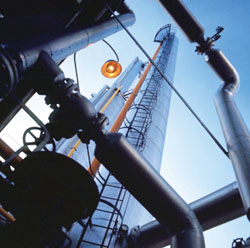 While the value of the state's energy leases is on the uptick, a planned package of incentives for private investors has been put on hold.**

The Louisiana Mineral and Energy Board conducted its first energy lease sale of the fiscal year in July, and the results were bittersweet for both state officials and the oil and gas companies that bid on the publicly held lands... While the value of the state's energy leases is on the uptick, a planned package of incentives for private investors has been put on hold.**

The Louisiana Mineral and Energy Board conducted its first energy lease sale of the fiscal year in July, and the results were bittersweet for both state officials and the oil and gas companies that bid on the publicly held lands.  As all concerned parties continue debating the merits of a ban on new offshore drilling, the lease sale - the first of the new fiscal year, which kicked off July 1 - included absolutely no offshore tracts. Additionally, there's barely any major activity to report from the Acadiana region.

The leases that were awarded in July, however, brought in more than $4.5 million for the state, an increase of $1.3 million over the July 2009 sale. There are likewise signs that investors are assigning more value to state leases. During the last July sale, the average cost per acre was about $600. At this year's sale, officials moved 25 leases covering 2,924 acres - an average payout of roughly $1,500 per acre.

From an administrative standpoint, the July meeting was the third monthly gathering in a row that the board failed to make significant progress on a proposed package of incentives and perks to spur private investments. Even though the policies were introduced a few weeks prior to the April 20 explosion of the BP Deepwater Horizon rig, it's fairly easy to make an argument that the assistance is needed now.
So what's going on? Patrick Courreges, a spokesman for the state Department of Natural Resources, which oversees the board's activities, says the holdup is only temporary. It is not, though, related directly to the ongoing environmental disaster in the Gulf of Mexico and the subsequent federal ban on new exploration, he adds. "It's not so much a direct reaction to the spill, but also the Legislature's regular session just ended, and there are a number of other factors," he says. "There's an awful lot of action right now, and resources are being drawn in different directions."

In early April, the board was urged to consider new incentives that would encourage more traditional oil and natural gas exploration in south Louisiana - attention to technologies like carbon capturing and solar power has been on the increase lately, especially in the Legislature. The request to give another bump to the old standbys came from former Department of Natural Resources Secretary Scott Angelle, who at the time served as chairman of the board. Angelle relinquished the post temporarily when he was appointed interim lieutenant governor by Gov. Bobby Jindal.

Another reason for the pause may be the thrust behind the original resolution drafted for the board. In the document, the board defines itself as "desirous" of attracting companies capable of going "deep and ultra-deep" - not the kind of language that gets thrown around lightly in post-Horizon Louisiana. Still, it's not like it's already happening. The resource play in north Louisiana known as the Haynesville Shale is being found at depths of up to 14,000 feet.

Last year, the Legislature agreed to a resolution asking the board to consider adopting policies that would encourage the development of wells drilled to a depth of at least 15,000 feet - true vertical depth from the surface. The board originally had that directive on the table, with an eye to the coastal zone. The proposal also included a provision that would require companies taking advantage of any related incentives to compensate for impacts to coastal wetlands at a rate of 125 percent of the habitat value of the wetlands, rather than the current rate of 100 percent. A nice sweetener for conservationists and restoration fans.

Parish governments, chiefly those on the coast, are really feeling the burn, especially as the moratorium tightens its grip over jobs and exploration activity. The 1974 Louisiana Constitution stipulates that 20 percent of severance taxes and 10 percent of royalties collected go back to the parish where the production occurs. That's a lot of loot. For the fiscal year that ended June 30, 2009, these two sources of income provided more than $438 million to Louisiana's energy-producing parishes.

By most accounts, state and local officials want to keep that money rolling in. That's why the proposed incentives package is supposedly still on the board's table; it's just a timing issue. Courreges, for one, says officials are actually still reviewing the proposed plan, but he couldn't offer a timeline of when the board might approve or discuss its contents. "It'll be taken up at a point when people better understand it and have taken a better look at it," he says.