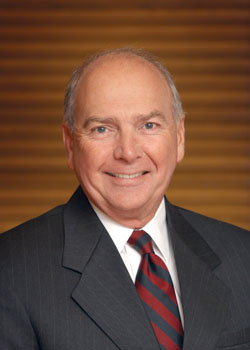 A Voice of Reason

Stone's top exec since 2004, David Welch has an engineering degree from LSU and a doctoral degree in economics from Tulane University, where he wrote a doctoral dissertation titled World Oil Market Economics. He also completed the Harvard Business School advanced management program and executive development programs at Stanford Business School and Cambridge University. The only member of management on Stone's board of directors, Welch was named to the board because of his knowledge of the oil and gas industry, experience as senior management with a major oil and natural gas company, and relationships with chief executives and other senior management at oil and gas companies and oilfield service companies across the state. ABiz recently caught up with the executive, who also is the 2010 chairman of the Greater Lafayette Chamber of Commerce, and serves as a director of IberiaBank Corp. and the National Ocean Industries Association, and as a trustee of the Nature Conservancy.

The first item that captures our attention on your bio is that you've repositioned Stone for long-term growth in the deepwater Gulf of Mexico and the Marcellus Shale resource play in the Appalachia, in addition to its historical position in the GOM shelf. Just how deep are your ties to deepwater GOM?
Stone owns roughly  80 deepwater leases, and we currently have about a dozen people dedicated to the effort. These leases come at a cost, and deepwater is very important to Stone. We had planned to commence four deepwater wells in 2010, of which only one has been drilled this year. If the moratorium continues, the other three will be delayed into 2011 or beyond. Our portfolio is robust, and we would love to see it exploited. If deepwater remains off limits, we will reallocate capital and people to other opportunities.

One of the major threats to the industry is the loss of expertise if those displaced workers don't return. How big an issue is that, and what steps, if any, can you take to hold onto these people until the moratorium expires?
Stone has actually added a few people to our deepwater effort over the last few weeks in an effort to retain expertise. We do not at present have operating people assigned to deepwater rigs. But for those that do, if the rig leaves the country, a few people will go with it and others will have to be redeployed. It may take years for this to recover.

As CEO of an independent oil company working in the deepwater GOM, what action have you taken to get the word to Washington that this moratorium is a knee-jerk reaction with potentially crippling economic ramifications for south Louisiana?
There is a danger of emotional legislation being passed in Washington, but hopefully with Macondo now shut in and little oil flowing into the Gulf, reason will start to prevail. Many in the industry are trying to help as a voice of reason. A few weeks ago I traveled to D.C. and testified before the Senate Energy and Natural Resources committee, which is dealing with potential new legislation. Stone is active with a number of companies and national organizations to promote a solution to adequate funding of any unlikely future well control issues.

Do you get the sense that Interior Secretary Ken Salazar and others in the administration are listening to anyone in the Louisiana delegation and willing to make adjustments in this policy? If so, who seems to have the most sway with them?
It feels like the secretary may be starting to get more comfortable with the safety of offshore operations. The shallow water Gulf is beginning to see a trickle of permits again, his new moratorium is specific to floating deepwater rigs, and he allowed himself the latitude to end the moratorium if he deemed it appropriate. All rigs have now been inspected and reinspected, and once Macondo is killed he may be ready to rescind it.

OK, so we weren't entirely honest in the first question. What really jumps out on your bio (which is quite impressive - you're a busy man) is that you worked for BP. When did you work for BP and what did you do?
I worked for Amoco and later BP Amoco for 26 years. My assignments ranged across multiple functions such as geology, engineering, strategy, commercial, pipelines and politics and multiple geographies including offshore, West Texas, Gulf Coast, Canada and Alaska and North America overall. I retired in 2004 as senior vice president at BP America Inc.

In the last few weeks more people in the industry have been turning on BP, trying to make the point that the Deepwater Horizon spill occurred because BP made bad decisions, that it put profit ahead of safety, that this is not how the rest of the industry operates. Is BP the one bad apple in the bunch, or does the industry have some problems that need to be addressed?
The Macondo Horizon should not have happened. It is a very rare event, and the causes will become known in the future. It appears that mistakes were made and that equipment failed simultaneously. Certainly the industry has been reminded of the importance of keeping safety first. We already have the protocols and processes to keep these events from happening. In addition, because of this explosion and subsequent spill, a new deepwater capture and containment technology has been invented, and the industry can have this available for deployment in days instead of months if the unthinkable ever happens again.

How could this disaster have been avoided?
This incident could probably have been prevented if any of several things had been done. If the BOP would have functioned as designed, if a short string liner had been run, if a lock down sleeve had been run, if the cement job had held. A relatively simple system of testing, verification and a more formal management of change process would address these issues.

What are the top five lessons we should all learn from the spill?
The lessons learned include being sure to observe the above preventions plus having a containment system sitting at Port Fourchon or somewhere for rapid deployment if needed, and this incident should not be an indictment of the whole offshore industry, as its safety record is among the best of any American industry. And finally, I think it would be wise to set up some type of industry-sponsored mutual insurance mechanism to ensure the financial wherewithal to deal with this type of disaster exists across the industry.