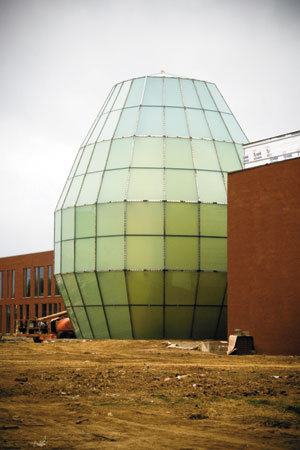 Since the groundbreaking ceremony last April for the Louisiana Immersion Technology Enterprise, or LITE, construction has proceeded on a building that looks much like any other contemporary building on campus. Until now.

The giant glass pod that will soon house the world's first digital, six-sided immersion cave is finally visible from Cajundome Boulevard. The project, which will allow humans to walk inside a digital universe that they can also manipulate, survived the escalating post-hurricane construction costs for materials and labor. LITE should be open for tours to a critical audience during TechSouth next month. That's exciting news. But the big buzz is the freshly inked staffing deal with the critical person responsible for leading LITE to its full potential as a research and economic development bonanza for the state.

That responsibility will fall to chief scientist Dr. Carolina Cruz. According to UL Lafayette's Vice-President for Research and Graduate Studies Dr. Bob Stewart, Cruz is the inventor of the first immersion cave and will join the LITE staff on April 3. "She is internationally known as a researcher," says Stewart, "but she has also done a number of projects in the private sector. That's a big plus for LITE because it will help us reach our economic development goals."

Stewart also predicts that Cruz will provide recruitment clout for the university, attract prestigious and profitable private projects and perhaps bring even more talent in tow. "It's not unknown for someone of her renown to bring people with her," he says, noting that some LITE positions have yet to be filled.

Dr. Paulette Blanchet and Troy Hebert will both be honored with The Spirit Award at this year's Viva la Cure! fundraising gala for The American Cancer Society. Blanchet, an oncologist and a cancer survivor, is known for her personal support of The Relay for Life, the Susan G. Komen Foundation Race for the Cure and The Breast Health Symposium, among other philanthropic endeavors. As a volunteer physician, she has donated her time and expertise on medical missions to Mexico and at The Cajundome, treating evacuees in the aftermath of Hurricane Katrina. Hebert, who was first diagnosed with cancer at age 11, became a varsity letterman on the Lafayette High wrestling team despite the loss of his leg and one lung. A physician recruiter for HCA and soon-to-be father of two, Hebert is a volunteer counselor for cancer patients and a committed fundraiser for St. Jude's Hospital.

The Youth Spirit Commendation will be presented to Jace Trahan, an Acadiana High School student who is currently in treatment at St. Jude's Hospital in Memphis. Trahan was diagnosed last November with a particularly aggressive form of leukemia and is facing a bone marrow transplant soon. A scholar/athlete, he is also active in the Air Force ROTC chapter on campus and enjoys the support of his friends and classmates who keep in touch with him through the Web site, www.caringbridge.org/visit/jacetrahan.

Viva la Cure! is slated for Thursday, March 23, at The City Club in River Ranch at 7:30 p.m. Local restaurants will provide a select buffet of favorite foods to complement Las Vegas-style entertainment and gaming. Tickets are $100 and available by calling Moss Motors at 235-9086.