The juicy sensation of a plump blueberry bursting sweetly on the tongue is one of those treats that can go a long way toward making a body feel good, and not just because of that flavorful blast of sugar making its way into the bloodstream.

It turns out those little lapis orbs could help people avoid Alzheimer's disease, fight bacterial infections and cancer, and live longer through their antioxidant nature. In smokers, eating a cup and a half per day of blueberries showed a reduction in oxidative stress, or free-radical damage, which is thought to be responsible for aging, according to LSU's Pennington Biomedical Research Center. 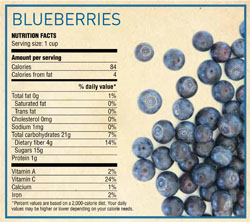 Don Ingram, a Pennington professor, is studying the health properties of wild blueberries. He says commercial blueberries 10 times their size are likely just as beneficial, something on which growers and marketers are savvy enough to capitalize.

"We're studying hypertension in rats," he says of efforts to pinpoint the medicinal essence. "I like rats because they don't lie. They can't fake it."

The Wild Blueberry Association of North America took notice of Ingram's research showing that "blueberries appear to act as both an antioxidant and anti-inflammatory agent, providing a protective effect against cardiovascular damage," according to his study, which was presented last summer.

The Miss-Lou Blueberry Growers Cooperative also sings the praises of the cerulean fruits, noting they might help improve night vision and combat cataracts. The group represents about 50 members in Louisiana and Mississippi who generated 300,000 pounds of the product in a recent season.

Ingram's goal is to isolate the useful chemical components in blueberries and patent them for synthetic production, since there cannot be a patent for a natural product. A comparable undertaking will identify whether resveratrol, a substance found in red grape skins and, therefore, in red wine and grape juice, lessens the arterial buildup of cholesterol, reduces the risk of heart disease and can be artificially concocted and sold.

While cooperation from private produce firms might be piecemeal when it comes to selling the science behind healthy eating, LSU's AgCenter isn't waiting for the market to get on board. The AgCenter received a $518,000 grant last year to develop a website called All About Blueberries to encourage growers in the Southeast to grow the crop and to juice consumer demand for the product.

And locally distributed pamphlets describe blueberries as "the No. 1 source of antioxidants among more than 50 fresh fruits tested by the U.S. Department of Agriculture."

The center says pick-your-own blueberries, such as the ones that ripen in the summer in Louisiana, are one way to get hold of the goodies, while supermarkets stock them from other parts of the country fresh through August. There are a number of places in the Acadiana area where people can pick their own blueberries, and local growers say blueberries are generally harvested here the last week of May through the first couple of weeks of June - and sometimes even into early July (go to www.pickyourown.org to find out where you can get them).

Pennington also takes its message directly to the community with workshops that complement its research. A recent workshop called "Put a little color in your life" detailed "how to eat the rainbow" by consuming berries that battle diabetes and other disease; for example, blueberries are thought to inhibit the intestinal growth of salmonella and staphylococcus.

Another potential superfood that might facilitate the absorption of glucose and lower bad cholesterol levels is cinnamon, which other Pennington researchers are studying. 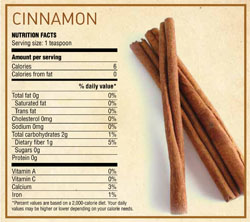 William Cefalu, a professor of diabetes and nutrition at Pennington, says clinical trials are under way to pinpoint why cinnamon jump-starts a diabetic's ability to use insulin, something with which the disease interferes.

"You can't just sprinkle a little cinnamon onto your breakfast roll, and that'll take care of everything," he says, adding there is "potential to isolate this component" that can be concentrated from cinnamon and used as a naturally derived medicine.

As intriguing as that sounds - Integrity's marketing materials cite the work of USDA scientist Richard Anderson, whom Cefalu credits with driving cinnamon research - the claims have not been verified by the U.S. Food and Drug Administration, which federally funded Pennington wants to see change.

"A lot of these supplements are not well-characterized," Cefalu says. "With FDA approval, you can be certain the drug you're getting has quality control" and proven efficacy.

A recent report by the Government Accountability Office that slams unproven health claims by supplement makers could lead to regulation of the products and require scientific validity. Cefalu says that could drive the companies involved to help fund research like Pennington's. "We've had interest from foundations," he says. "I would welcome more involvement from the agricultural side of things."

Another focus of Pennington's anti-diabetes mission, its primary charge, is to consider the benefits of tarragon. A study in human subjects shows that the herb reduced blood sugar in diabetics with no side effects, and Cefalu says Pennington's work could be published in a journal and lead to more research.

That's the bottom line, Ingram says. The nutraceutical field is growing thanks to public interest in "nutritious pharmaceuticals," he says, so funding should be directed to confirm the anecdotal benefits of nuts, berries and herbs. "The growers associations are happy. The grocers associations are happy," Ingram says of nutraceutical health claims. "What I'm surprised about is the lack of USDA funding for clinical trials. It's minimal," he says, noting the allocations are in the tens of thousands of dollars for studies, rather than hundreds of thousands that are warranted.

A version of this story first appeared in Baton Rouge's Business Report.