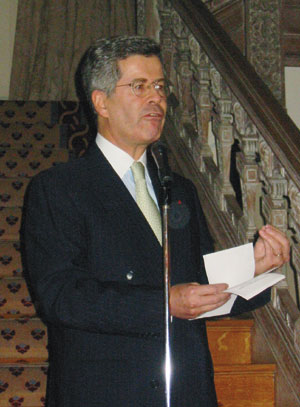 After a one-year hiatus, Leadership Lafayette has been revamped, revitalized and is ready for new applicants. The 20-year-old program was suffering from program fatigue, says Greater Lafayette Chamber of Commerce President and CEO Rob Guidry, who also steers the LL program. "Many mature leadership programs across the country were experiencing the same thing at the same time," he says, "and a national conference was held last summer to deal with the challenge." Chamber board members Doug Menefee and Jim Venable attended the confab on behalf of the local curriculum.

LL's annual schedule has been lengthened to 11 months, and the scope has been broadened. Future classes will be responsible for composing a position paper on a timely topic to be presented to the chamber board or another civic or governmental group for action. Guidry says the new program will not be an easy stroll toward a nice addition to one's resume. "There will be more preparation and 'homework,' if you will," he says. Applications may also be accepted from outside Lafayette Parish so that a more regional perspective could evolve ' a big plus in the current economic climate. Additionally, LL classmates will be required to attend the chamber's annual Building Community Conference and volunteer a day with a United Way social service agency. Deadline for application is Monday, Nov. 21. Applications are available by calling Mike Olivier at the chamber office: 233-2705, ext. 225 or [email protected]. You can also visit the chamber's Web site (www.lafchamber.org) to download the paperwork.

Who is Harrison Tweed?

Harrison Tweed was a New York City lawyer and former president of the American Bar Association who was known for his commitment to philanthropic endeavors. The ABA's top award for public service by attorneys carries Tweed's name, and this year local lawyers earned that honor.

The Lafayette Outreach for Civil Justice, which has so far raised $275,000 in pledges to fund court expenses for the pro bono civil work of local attorneys, was a major factor in the award. Attorneys Richard Broussard and Frank Neuner led that fundraising charge. Glenn Armentor and Jack McElligott have accepted the next phase of the drive. Acadiana Legal Services, headed by Joe Oelkers, plays a big part of administering the service to clients in need.

Lafayette is the only Louisiana bar association in the 49-year history of the award to win the honor, which usually finds its way to a major metro area.

Hands Across the Water

"Tonight, we want to pay tribute to all those who generously showed their sympathy to the victims of Hurricane Katrina, and more particularly to the French companies that answered calls for help in such a spontaneous and efficient way," Ambassador Jean-David Levitte recently said during an official reception at his residence in Washington, D.C. He graciously opened his home to announce that more than $18 million in aid had already been pledged from French companies such as Air France, Air Liquide, Airbus, L'Oreal, Michelin, Pernod Ricard and 19 other firms. Additionally, the French government sent 20 tons of emergency provisions and supplied military divers to help clear the troubled waters of Louisiana. Another $2.2 million has been pledged, according to the ambassador, and many cultural exchanges are planned to benefit Louisiana musicians and artists as well as restore the National D-Day Museum.

Although the hurricanes forced the Junior League of Lafayette to cancel its annual Tinsel & Treasures fundraiser, 98 percent of the sponsors honored their commitment to the cause. You, too, can still support the great work they do, because the annual auto raffle for a brand new Dodge Durango is still under way. Call 988-1079 for details.

You've heard of England's Aileen Bennett. She's an award-winning speaker and in-demand communication coach, and now she's a Lafayette resident. Aileen finally wrote the book about what she does, and it's great. Titled Notes on Shining-Tips to Improve Your Presentation Skills, it's available at Lily's For Books or on www.amazon.com.