Local events benefit The Leukemia and Lymphoma Society of Louisiana. 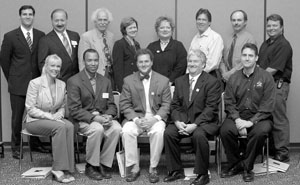 What was physical therapist Mike Sasser doing in the bucket of a lift truck high above The Cajun Heartland State Fair on closing weekend? Why did Superintendent Dr. James Easton broker a basketball game recently between the school board and the Lafayette City-Parish Council? And how did Dana Armentor persuade New Orleans couturier Harold Clarke to come to Lafayette for a trunk showing last week?

These are just a few examples of the many events that have been organized to raise money for The Leukemia and Lymphoma Society of Louisiana, and as chair of this year's campaign, I am immensely grateful. Nineteen candidates accepted the charity's challenge at a kick-off event in April and started individual fundraising efforts. The two who raise the most money will be named Man and Woman of the Year for Acadiana at the campaign's grand finale next week; and although they are competing with each other, the candidates are united in the spirit of a good cause.

The competition is a unique approach to fundraising developed by the California chapter of the society and Dr. Ray Authement, who spearheaded the first drive here and brought the concept to Louisiana four years ago. In addition to the candidates mentioned above, this year's field includes Glenn Armentor, Dr. David Barry, Karl Breaux, Marcus Brown, Douglas Brown, Ben Harrington, Carlton Handy, Lou King-Patin, George Latiolais, Sterling Lejeune, Leonard Louvierre, Sylvia Oats, Burt Ortego, Nelson Schexnayder, Stephen Stefanski and Shawn Wilson. And because leukemia is, unfortunately, one of the most common cancers among the very young, a boy and girl who have survived the disease are also honored annually. The 2005 campaign is a tribute to 11-year-old Brennan Bergeron of Lafayette and 15-year-old Katie Daigle of Jeanerette.

The drive will culminate at a gala on Wednesday, June 22, at The Cajundome Convention Center at 6:30 p.m. There will be live music by Kurt Boudreaux, a cocktail buffet, a silent auction and a live auction with auctioneer Dr. David Legendre. Tickets are $25 per person and $300 per table, and you can purchase them from any of the candidates or by calling the Cajundome at 265-2171. If the group's enthusiasm during the campaign is any indication, it should be a truly grand finale!

Forbes Magazine tracked down George Oldenburg at The Zoo of Acadiana for a feature on entrepreneurs who have made unusual career moves. George's switch from a banking career to zoo owner was certainly a wild one, and the column offers a whimsical snapshot of his life. You can find it online at www.forbes.com, dateline June 6. It's worth a read.