The New Thing-A-Mento on Jefferson Street 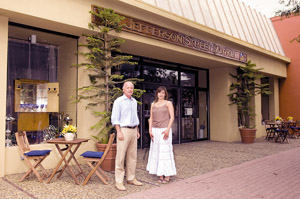 When you run a small café in the midst of some of the best plate lunch restaurants in the world, it makes sense to take your menu in a different direction. Rob and Catherine Robison, owners of Jefferson Street Market, have always counter-programmed the tiny bistro nestled in the midst of the many shops in their store, and the new food vendor is no exception.

In early June The Whole Wheatery Eatery, Lafayette's oldest health food restaurant, will expand into the Robison's space, which was vacated by Roly Poly earlier this year. "We were looking for something that wouldn't duplicate what was already downtown," says Rob. "Our clientele is eclectic, and we feel like this will be a good fit."

The Wheatery and adjunct Oil Center Health Food Store, which was started around 1970, was purchased two years ago by Chelsea Maillet. A graduate of UL Lafayette, Maillet managed The Royal Street Café in New Orleans' French Quarter for six years before moving back to Lafayette and buying the business. This will be the first major move in the history of the store.

Initially, Maillet will offer the many popular salads, soups, sandwiches and baked goods that are staples of The Wheatery menu, plus bottled teas and waters, organic soft drinks and organic coffee from Costa Rica. She plans to include her delicious, healthy plate lunches as soon as possible as well as espresso and other specialty coffees. I can't wait ' I've been riding my bike or driving across town to get my thing-a-mento sandwich fix for more than 25 years. Soon all I'll have to do is stroll down the street!

St. Landry Parish has long sat dormant as neighboring southern parishes were growing, but the trend is changing and Van Eaton & Romero Realtors has jumped into the mix. Broker/owners Nancy Van Eaton Broussard and Gail Romero announced last week that they have acquired the area's oldest real estate firm, Shirley Wilson Leger Realty. VER celebrated by hosting a Chamber of Commerce Business After Hours at their new offices on South Union Street in Opelousas and, showing the appropriate market sensitivity, invited local legend Hadley Castille to join other musicians and provide the afternoon's entertainment.

Southwest Medical Center has been given five stars and ranked tops in Louisiana for two types of vascular surgery and among the top 5 percent of hospitals in the nation in overall vascular surgery by HealthGrades. The independent rating service based its findings on more than 37 million surveys of Medicare patients and independent analysis of more than 5,000 hospitals nationwide. The specific procedures cited for the state excellence award are carotid endarterectomy (clearing blockages in the main head/neck artery) and peripheral vascular bypass. "I'm especially proud of our staff and physicians because of the high incidence of peripheral vascular disease in Louisiana," says Dr. David Allie, medical director of cardiothoracic and vascular surgery at Cardiovascular Institute of the South, which practices primarily at Southwest.

Joey Beyt is touting the wares of his new chef Gary Schenk, who comes to Lafayette after a seven-year stint at The Marriott in Baton Rouge. Beyt offered some samples last week of items new to his prepared foods line ' a chunky chicken salad, a chilled broccoli salad and shrimp in white remoulade, all very nice additions to his fare. In coming weeks, look for a variety of chilled soups du jour, including cucumber, vichyssoise and avocado.

Schenk's experience in handling large corporate groups will also expand Joey's range for outside catering. Schenk also has a local connection of his own: he's married to Jeanne Louise Wattigny of New Iberia.

Last week we announced the inaugural production of The Independent Weekly's Hair Ball to benefit The Performing Arts Society of Acadiana. The evening of food, drink and music will showcase seven area salons in a high-energy, runway show of dramatic and distinctive hair styles ' Acadiana's twist on similar events in major fashion markets across the world. Spa Mizan was inadvertently omitted from the list in last week's fashion section announcing the show.

The event is slated for Thursday evening, June 1, at 7:30 p.m. at The Ballroom in downtown Lafayette. Tickets are $35 per person. Other participating salons include Frederick Hair Studio, Rebecca's, Studio One2One, The Aveda Istitute, Navarro's and be.salon. Contact Drue Kennerson for more info at 988-4607, ext.118 or [email protected].