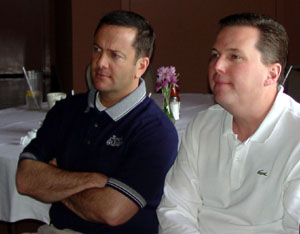 Bring up a topic like 'cultural economy' at The Greater Lafayette Chamber of Commerce Building Community Conference and what might you reasonably expect? I anticipated a polarized meeting of the minds ' specifically a face-off between left-brainers and right-brainers ' but I'm happy to apologize for being so presumptuous. Not only did the group of business leaders assembled at last weekend's conference in New Orleans "get it," as Lafayette Consolidated Government CAO Dee Stanley put it in his opening remarks, but they were energized by the idea that arts, culture and entertainment can play a meaningful role in Louisiana's economic future.

It doesn't hurt that Lafayette is presented as a success story for the rest of the state. "I use Lafayette as an example of a community in Louisiana that is doing it right," said Lt. Gov. Mitch Landrieu, citing new museums as important additions to popular local music and food venues. And any left-brainer would respond to the growth potential Landrieu laid out for the film industry. "We're now at the table with major studios like Paramount, Sony and Columbia Pictures," he said, listing our LA along with that other L.A. (Los Angeles), Canada and New Zealand as the current top destinations for producers. "In Canada, film production is a $5 billion industry. Two years ago it represented $169 million to Louisiana, and that grew to more than $350 million last year," he said, citing films like the Academy Award-winning Ray, family favorite Because of Winn-Dixie and the movie revival of The Dukes of Hazzard. "I know it's going to upset our Canadian friends, but we're going after that $5 billion."

The economic benefit isn't all about big business either. A windshield glass company in Clinton where Dukes was filmed made $80,000 in three months as a vendor on the project ' under the radar business that doesn't always get reported but meant record-setting numbers for that small shop. And there's more data to come for committed number crunchers. Pam Breaux, assistant secretary of cultural development within Landrieu's office, outlined a statewide study that will quantify the current economic impact of Louisiana's cultural economy and yield a strategic growth plan for seven regions across the state. "We're the first state in the South to embark on such a plan for the cultural economy," Breaux said, predicting that the study will suggest music as Acadiana's unique selling point.

Noted folklorist Nick Spitzer, who produces the syndicated radio show American Routes from his adopted home in New Orleans, encouraged attendees to continue to recognize and nurture the musical and ecological gems of Acadiana. "Go to the clubs and support these musicians," he said, adding later: "You've got to protect the beautiful landscape of Acadiana ' the live oaks, the swamps and water quality." A Smithsonian grant for the study of zydeco and Creole music lured Spitzer to Lafayette from New England two decades ago, but clearly the cultural diversity of Louisiana is what enticed him to stay. "Celebrate that diversity," he urged. "It's a treasure." It's also an implicit message to perhaps millions of listeners across the globe each week attracted to his show. For us, it's the kind of promotion for the Louisiana brand that can't be bought through advertising alone. (KRVS-FM 88.7 broadcasts American Routes every Friday afternoon from 1-3 p.m.)

But political leaders say that renewal of state tax incentives is critical to this burgeoning industry. With a tight state budget, Landrieu is concerned about protecting the existing credits for filmmakers. And citing how well they have worked for the movie industry, state Sen. Mike Michot hopes to expand the incentives into the musical arena. He plans to introduce legislation in the upcoming session to offer credits to movie producers who use Louisiana musicians for soundtracks as well as record producers who use Louisiana studios, like the respected Dockside Studio in Maurice. "I hope that those watching the state budget will recognize that we don't have much tax revenue from these sources now," he told me over the weekend. "And Louisiana has so much talent and potential in this area that it's well worth the modest investment these incentives would represent."

Michot is asking for public support of his efforts. If last weekend's meeting of the minds of the Lafayette chamber is any indication, he can expect it from segments of the business community that will surprise state leaders as much as it pleasantly surprised a lot of us. Even me.