The publisher on small business, big ideas and a community on the move 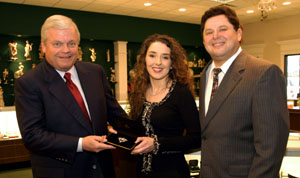 When Richard Zuschlag had open heart surgery more than four years ago, there was no question but that the procedure would take place right here. "Lafayette has excellent hospitals and extremely competent doctors, especially as it relates to matters of the heart," he said last week in recounting his successful operation. "It's a big part of why we've become such an important regional medical center here."

Zuschlag is in a particularly unique position to have an informed point of view. He's been a heart patient in need of critical care. And as chief executive officer and chairman of the board of Acadian Ambulance Service, he closely follows industry trends. "Our ambulances used to take 20 patients a week to Houston. We're blessed now to have such fine surgeons and facilities right here that we don't have to do it anymore," he noted.

Those combined experiences have made Zuschlag the perfect choice as honoree for this year's benefit fundraiser for the local chapter of The American Heart Association. It promises to be the biggest in the event's history, and Zuschlag credits Jerry Romero, gala chair and vice-president of Acadian's operations in this region, for the success.

Thanks to Chantal Nacol Galatas there is also a real jewel associated with the fundraiser, which is titled Jewels of the Heart. She urged her father Bill, the founder of William S. Nacol Jewelry, to respond when the Heart Association called. "We're doing this in honor of my dad's younger brother Charles, who was a surgeon in Henderson, Texas, and died over six years ago of a heart attack at age 45," she said. The customized designer piece in 18-karat white gold, which can be worn as a brooch or a necklace, has 2.60 carats of diamonds and 1.86 carats of rubies set in an intricate floral pattern of hearts. It is valued at more than $9,000 and will be the centerpiece auction item at the black-tie optional event, slated for Saturday, April 2, at 7 p.m. at River Oaks. Tickets are $100 and available by calling 521-8600 or by e-mail: [email protected]

The newest installment of The Acadiana Consumer Confidence Index can be found in this issue. JP MorganChase, transitioning from BankOne in this market, is the underwriter for this quarter's report, and the sponsorship marks the official debut of the bank's new corporate brand in Acadiana. Local market president Barry Berthelot says he chose to support the research because the information will help local business decision makers. Our clients need all the resources they can find to help them understand the economy and develop a view of the near term future," he says. "JPMorganChase is proud to be the first sponsor of this survey and we hope it becomes a useful tool for the market."

Although BankOne's customers in the private banking, checking account and credit card divisions have already been introduced to the new brand, it won't be obvious to the general public until July when the signage will change on 25 branches around Acadiana.

The Acadiana Consumer Confidence Index is The Independent Weekly's quarterly regional report on attitudes about personal spending, employment and financial security and is produced in collaboration with UL's B.I. Moody School of Business. The findings are archived on our Web site at www.theind.com.

Members of The Greater Lafayette Chamber of Commerce will receive a 10 percent discount on many purchases through a new Member2Member promotion announced last week. It's a win-win for those who participate: companies can pick up new business while buyers benefit from real savings. The list of more than 30 participating companies is available on the Chamber's website at www.lafchamber.org and includes exhibit space in our own INDExpo'Your B2B Marketplace, which is slated October 12-13 this year. You can also save on other items from cosmetics to cars. Beat 'dat!