The Fire Still Burns After 20 Years 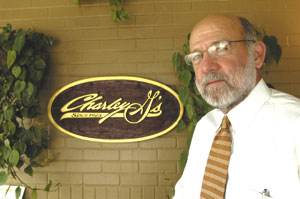 My first meal at Charley G's was a business lunch with Harold Abdalla in August 1985. Steve and I had just moved back to Lafayette, having spent two years in Shreveport launching our weekly newspaper UpState. The new restaurant concept was all the buzz. The décor was big city bistro. The kitchen was open with the chefs in full view cooking on a wood-flame grill. Everyone watched the weekly ads to see who was going "Grill Crazy."

There was no Fernewood Subdivision and little development other than Acadiana Mall and a couple of strip centers way out there on a soon-to-be four-laned Ambassador Caffery Parkway. Charlie Goodson and Ken Veron had been doing well with Café Vermilionville, and now they were going where no Acadiana restaurateurs had gone before. Within a year ' and in an environment of collapsing oil prices and disappearing expense accounts ' the two decided to divvy up assets with Goodson keeping the restaurant that bore his name.

Of all the new ideas they brought to the market, Goodson says the restaurant's design was probably the scariest: "People told us that this style would never make it." Prior to Café V, Goodson was involved with Judge Roy Bean's Saloon and in Beef and Ale. "In those days we did all the interior work ourselves," he recalls, "so this time we had a professional do it ' imagine!" Mastering the art of commercial cooking over open hardwood flames was also a challenge. "It's real tricky," says Goodson. "The fire moves around, and you have to make sure it doesn't go out on a shift." Troy Reaux has been the king of the grill at Charley G's since the restaurant opened 20 years ago. And Carl Boudreaux has been making one of the signature dishes ' the smoked duck and andouille gumbo ' since the very first day.

Goodson expanded outside the local market twice, first with a Charley G's in Metairie and later with Thib's in Destin. He closed the Metairie restaurant after a run of mixed success and sold the Thib's concept several years ago to the corporation that owns Popeye's, which did a build-out in Atlanta's toney Buckhead district with Charlie in a consulting role. "They had a change in upper management, and it never opened," he says. What did he learn from the multi-unit experience? "Be careful what you wish for," he says. "I found out that I need to live in a market to have my finger on the pulse of what people want."

Local patrons will tell you that the restaurant has clearly flourished now that Charlie has discovered there's no place like home. With so much new competition, he traded in his road warrior status at a good time. And after a lifetime in a very tough business, Charlie still has the fire: "As hard as this thing is, I have never had one day when I woke up and said I didn't want to go."

Peter Yuan has been named president of the Lafayette market for IberiaBank. He replaces Pat Trahan, who has moved into the newly created position of vice-chairman for the Lafayette market with responsibilities for client and civic relations. An 18-year veteran in banking, Yuan has moved here from Austin, Texas, where he served most recently as senior vice president of commercial banking for JPMorganChase (formerly Bank One). He began his career in the energy services group for Bank of America (formerly NationsBank) and joined First Commerce Corp. in 1993 with stints in both New Orleans and Shreveport.

Prejean's owner Bob Guilbeau and general manager Dean Dugas recently returned from San Antonio after receiving the highly coveted Achievement of Excellence Award from the American Culinary Federation. The award recognizes members for exemplary commitment to the industry. "We have worked very hard and are delighted to receive such an honor," says Guilbeau. "This is an achievement not just for Prejean's but for Acadiana as well."