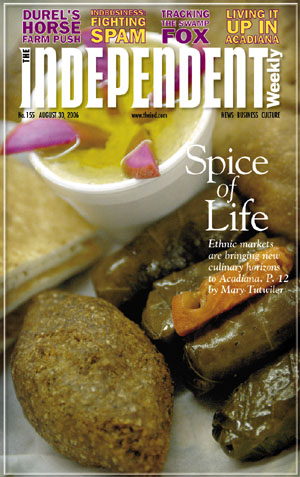 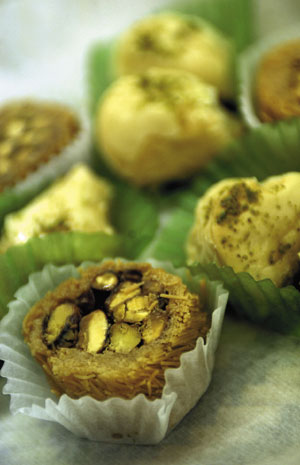 "Puta this on your tongue," Maurizio Principata coaxes in his rich Sicilian accent, fluttering a paper-thin piece of dry cured meat off the blade of the slicer. "It melta in your mouth. It's the good stuff." The pink and red slice of Speck, pork thigh that has been salted, cold-smoked and dry cured for months resembles prosciutto, the famous cured ham from Parma, Italy. Speck has a finer grain that feels like butter in the mouth, rich and subtle and totally addictive.

He reaches into the deli counter at Principata's Italian Food Market and grabs an enormous salami. "Now try this," Maurizio says, putting the chunky salami punctuated by dime-sized circles of pure white fat and rosy red peppers on the cutting board. "Ah, this is the best ' Mortadella Ducale, with the black pepper and pistachios. And this one now." His last offering is cured Serrano ham from Spain, deep red and impossibly rich in flavor.

Cavaradossi's famous aria from Tosca, "E lucevan le stelle," swells on the stereo and Maurizio pauses. His blue eyes close as his head rolls back in a swoon of pleasure. "This is what I want to bring to the people of Lafayette. I want to give them really Italian culture."

Besides its famed Cajun and Creole heritage, Lafayette also boasts an international population composed of immigrants and descendents of Europeans, Africans, Latinos, Asians, Middle Easterners, and Native Americans ' and small markets like Principata's offer much more than new culinary adventures. For many patrons, they offer a connection to their homeland ' a whiff of curry powder, the hypnotic snake dance rhythms of Algerian music, Oaxacan-flavored dialect over freshly made tamales and the ability to send money orders to family members. Those are some of the comforts at places like the Italian Food Market, S&P Oriental Market, Cedar Grocery and El Ranchito.

"There was no market for Mexicans," says El Ranchito owner Molly Babb. Originally from Belize, Babb lived most of her life in Morgan City until she moved to Lafayette to be near her daughters at UL Lafayette. She opened the tiny store on Cameron Street two years ago as a hobby and started driving to Houston every week with Mexican boyfriend Cesar Barragan to pick up queso fresco (fresh cheese), fruit-flavored sodas, bottles of habanero and chipotle hot sauce, preserved cactus strips, cans of hominy (for posole stew) and packets of achiote seasoning for rice. The first few months the couple struggled to make the rent. "Some days, we only made $13," Babb says. Last year, they added comidas (cooked food) to their offerings, and suddenly the shop swelled with hungry Spanish-speaking crowds who filled the aisles and lined up out the door for flavorful fresh tacos and tamales.

At lunch and dinner time, the four tables in the back room quickly fill with men still wearing the white dust from construction jobs on their boots. The music is Spanish and the TV broadcasts one of 24 cable channels from Mexico. "This is authentic," says Gabe Acosta, a third-generation Texan whose grandparents immigrated from Mexico. "People used to ask me where to get the best Mexican food, and I'd tell them 'at home.' I came here last night for the first time, and today, I'm picking up lunch for everybody at work." Acosta, who works at Knight Oil Tools, says most Mexican restaurants in Lafayette serve a mainstream Tex-Mex version of south-of-the-border dishes. "Hard shell tacos aren't what you get at home. Here, they make soft corn tacos, and the flavor is traditional." The tacos made by Caridad Lozauo and Imelda Garduno in the tiny kitchen have a fajita filling of seasoned beef skirt or a shredded beef filling called barbacoa. Topped with a sprinkling of onion and cilantro, a squeeze of lime and brushed with fiery chipotle sauce, they offer a whole different world of flavor than the drive-thru at Taco Bell.

Tamales are patted by hand into corn husks on Mondays. El Ranchito frequently runs out of the prized corn beef and chicken tamales by mid-week, but there are other dishes such as the enchiladas with a green tomotillo sauce, caldo (a Mexican version of beef and vegetable soup), revelatory cheese and beef quesadillas and the special goat barbacoa served only on weekends.

According to the Lafayette Economic Development Authority, there are an estimated 1,722 Mexicans living in Lafayette. How many Mexicans walk through the doors of El Ranchito? "All of them," Babb says with a laugh. "No, really, I have about 50-60 regulars every day. But there are new people, white people coming now too." Babb offers other services beyond food to her customers, some of whom speak no English. She can wire money to Mexico, and she sells phone cards that allow her customers to call home from the El Ranchito phone. On the wall are postings for jobs and apartments in Spanish, helping new members of an immigrant community make the transition to Lafayette.

The oldest ethnic grocery and deli in Lafayette is Cedar Grocery on Jefferson Street. Nabil Loli emigrated from Syria with his parents in 1978; when he opened Cedar Grocery in 1981, it was the only international market in the area. "There was none in Baton Rouge, and the only other market was the Central Grocery in New Orleans," Loli remembers. "Lafayette, 30 years ago, was a small town, with a lot of Lebanese, Syrian, Nigerian and Iranian students at the university. When we opened, the international students were my business. Only gradually did locals start coming. I spent a lot of time explaining ' what's in the tabouli, what is hummus. Today, most people know."

The shelves at Cedar Grocery are stocked with olive oil, grape leaves, tahini (sesame paste for making hummus), cracked wheat (the main ingredient in tabouli and kibbe), spices like sumac and zatar (for spicing flat bread or cooking lamb) and Turkish Delight. Syrian yogurt, feta cheese and jars of tarama (fish eggs to be mixed with olive oil and lemon to create taramasalata, a Greek dip) fill the cooler.

When Loli began, the grocery was his main business. But what brought people in the doors was a taste of the Middle East. Meat pies, falafel sandwiches, hummus and lentil soup were on the menu from the beginning. The 16 sandwiches on his menu today evolved from specials Loli concocted. One local favorite is the Labani, layered with yogurt, kalamata olives, lettuce, tomatoes, olive oil and mint. Another, Chicken Tandoori, is an Indian-inspired sandwich with the smoky flavors of tandoori tamed by tahini sauce. All of Loli's varied fillings are stuffed into Francois Poupart's French bread, another essential immigrant addition to the international food scene.

"What has happened," Loli says, "is that we have become family in Lafayette. Twenty-five years ago, I saw kids coming in with their parents. Now they are bringing in their own children." The established deli and market has become a comfortable business for Loli. "It took five years to take root," he says. "But if I had to open up this business right now, the answer would be no. The supermarkets are carrying fancy stuff. For a small market to compete with them is difficult. Sam's Wholesale has imported cheeses, exotic gourmet items." Superstores like Sam's and Albertson's sell in such bulk that their prices often undercut the small specialty markets. "For olive oil, I am cheaper," Loli says. "But cheese, no."

Quality is one reason to shop in the small markets. A knowledgeable owner who can explain the uses of exotic produce and packages written only in Chinese or Japanese characters is another. Som Vang Sonemangkhala arrived in New Iberia via Thailand in 1986, after fleeing the communist takeover of his home in Laos. Sponsored by his cousin, Sonemangkhala opened Asia Market on Hopkins Street in New Iberia. A divorce left his ex-wife with the market and Sonemangkhala moved to Lafayette, where he opened S&P Oriental Market in the small strip mall behind Baskin-Robbins on Johnson Street in 1999.

The market carries Laotian, Vietnamese, Chinese, Filipino, Thai and Japanese specialties. Much of S&P's clientele are Asian immigrants, but Sonemangkhala is seeing more and more locals in his shop searching for yellow or green curry, fragrant Thai basil, instant miso soup or rice paper to wrap up homemade spring rolls. Chong Wang, a UL computer science student from Sichuan Province in China, shops at S&P for tofu, bitter melon and specific brands he can't find in other supermarkets. "Things I need for cooking like sesame oil, the hot chile peppers, star anise seed, I buy from S&P."

Exotic produce needs experienced handling by people familiar with the rare fruit and vegetables, who understand what needs to be cool, what ripens at room temperature. Miniature royal bananas have a rich sweetness ordinary bananas can't match. Galanga root, fresh bamboo shoots, mung bean sprouts, green papaya, lychee, Asian pears, fuyu persimmons and hairy red rambutan fruits are available only in these small markets. Like El Ranchito's Babb, Sonemangkhala drives to Houston to pick out his produce and ensure its quality and freshness.

The strange strip mall ' its entrance is almost entirely blocked by a car wash ' that houses S&P is also the home of Principata's Italian Food Market. Principata is an experienced food importer with wholesale businesses in Houston; Brooklyn, N.Y.; and Pompano Beach, Fl. The Italian Food Market is his second round in the retail market; his first, the Emporio Italiano, on Congress next to Langlinais' Bakery, closed when Principata returned to his home in Sicily in 2002. Following the birth of a son, the family returned to Louisiana from Italy, and though divorced now, Principata has established himself in Lafayette to be close to his 4-year-old.

Since the Italian Food Market opened in February, word slowly spread about the authentic Italian and Spanish cured meats, cheeses, and delicacies like blue cheese stuffed olives, artichokes alla romana, truffle cream and aged balsamic vinegar. The curious and the cognoscenti are drawn to his small shop. "I only found Maurizio three weeks ago. I walked in the door, and all I could say was 'I'm home,'" gushes ad agency owner Julie Calzone. "I'm half Sicilian, half Calabrese. This is what I was raised on. I picked up a 6-pound can of giant peeled Italian tomatoes and couldn't put it down." When she first moved to Lafayette more than two decades ago, she was shocked. "You couldn't even buy ricotta cheese," she says. While the variety of Italian items at supermarkets has improved, Calzone longed for the experience of shopping for authentic Italian ingredients in a small market. "Smelling, taking a little taste, talking with someone who is knowledgeable, that's the pleasure of food," she says. Which is exactly the experience Principata wants to offer.

"The truffle cheese, only I know about it," Principata says. "People taste, they come back and buy." Big news in the food world this year is that Italian salami, banned in the U.S. for 45 years, can finally be imported directly from Italy and France. Principata is ecstatic. "The [other] salami come from Canada. It taste like plastic." The more passionate Principata becomes, the more operatic his English. "I have homemade salami, the old way, from New York. Thees is no plastic. Next week, I have a salami from Italy. You come, I will make you a sandweech." Calzone says she'll be there every week, doing her household shopping. "It's places like this that make our city great."