Local manufacturer serves up a weekly luncheon tour of his facility. 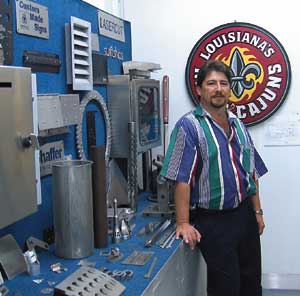 Each Friday morning during Blues Box on KRVS, Begneaud Manufacturing owner Don Begneaud underwrites the program and broadcasts an invitation to a weekly luncheon tour of his facility. Not to miss out on such a generous offer, I took my turn last week.

Although we had a great chicken-fried steak in his employee dining room, complete with linen table cloths in the corporate blue color, the precision metal-working shop is so clean that we could just as easily have picnicked on the floor. The tour begins at a small display full of some of the gleaming geometric shapes that are punctured, stamped, lasered, rolled, welded, anodized and otherwise manipulated from aluminum and stainless steel by Begneaud craftsmen and women. A multi-colored UL Lafayette crest and torch hangs among the industrial items. What appear to be brush strokes of paint are in fact delicate swashes of tissue-thin metal in different colors, layer upon layer. A limited edition piece, Begneaud made only 10.

Begneaud was a student at USL, riding his bicycle between class and shop, when he hired his first employee in 1978. His business grew quickly, and he didn't quite finish college. In the years since, he has accumulated an impressive array of sophisticated, highly calibrated computerized German and Swiss-made equipment. Some of the machinery costs more than $1 million with margins of error measured in .5 decimals. From tiny laser-etched serial-number plates to 20-foot lengths of perforated drill pipe to the aluminum backbones for Icee machine paddles to military components that can't be discussed, Begneaud products are shipped all over the world. "We have 55 employees, and we're hiring," he says.

Over lunch, we discussed some of the books that have affected his management style, especially The Wisdom of Crowds by James Surowiecki. He shared stories about attempts by Mississippi economic development officials to lure his company away. It motivated him to collaborate with the Louisiana Association of Business and Industry to secure lower taxes for Louisiana companies that invest in expensive equipment. Gov. Kathleen Babineaux Blanco even signed the bill at Begneaud's office. Sure hope for her sake they were serving the chicken-fried steak that day.

On the heels of last Saturday's election, the local tech community is gearing up for the new opportunities represented by the recently adopted Louisiana Digital Media Act. Similar to the state's successful tax-credit program for movie production, it creates incentives to attract video game companies to the state, which some say are even more desirable. "Movies are short-term projects," says Lafayette Economic Development Authority Vice President Henry Florsheim. "Video gaming projects can last three to four years."

Firefly Digital owner Mike Spears helped pull together the first strategy session. "We want to position Lafayette in the state landscape," he says. "This isn't just about entertainment. There are educational and business applications that can be developed in a video game environment." He is also meeting this week with representatives of the tech communities from Baton Rouge and New Orleans: "We hope to develop a state strategy so we don't duplicate efforts."

Workforce development opportunities have universities across the state gearing up as well. According to a recent story in New Orleans CityBusiness, some observers consider UL Lafayette the frontrunner because of its Computer Science Department emphasizing game design. "Associate professor James Etheredge said UL graduates will be able to work in the video game industry or any other computer science-related field," wrote Greg LaRose in his June 27 story. Experts say that video games and simulations typically take a year or more to develop and can cost up to $50 million, mostly in salaries to computer programmers, graphic artists and technicians. Average salaries for game developers in the United States are $75,000 with a starting salary of $54,000.

Open just eight months, the local Texas Roadhouse took top honors among 205 stores in the nation in a recent rib sales contest. Local franchisees Mary and David Prichard credit service manager Brannon Bourque and staff for the jump in sales (they even beat the Willie Nelson-owned store in Austin). The Prichards borrowed oven space from some nearby restaurants to keep up with demand. "The staff told us they were going to win it and they did. They were truly committed!" say the owners. Check out the winning team at the corner of Johnston Street and Ambassador Caffery.