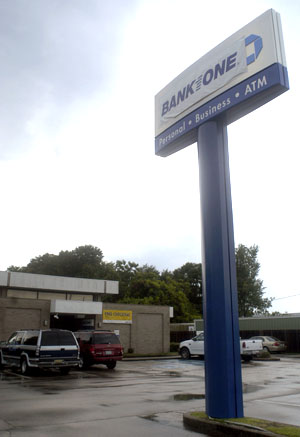 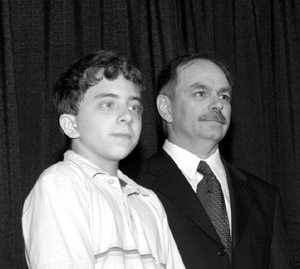 Crews have been busy installing new signs at all 17 Bank One locations around Acadiana, each covered with a vinyl shroud sporting the current logo. But the veils will be dropped on Monday to introduce the Chase brand of banking, not only in Acadiana but at 176 offices and branches across the state.

Barry Berthelot, president of Chase for the local region, says the JPMorgan co-brand is also entering the market. "Introducing not one but two brands could be a challenge," he says. But the collective key selling points are convenience, efficiency and a much expanded product line, especially for businesses including syndications for big packages. "I'm continually amazed at how international the market is in Acadiana," Berthelot notes, citing a recent visit with a rice farmer near Crowley who is an excellent fit for the multi-national services the bank can now provide. He cites other benefits, including free access to almost 7,000 ATMs and eventual entrée to more than 2,500 branches nationwide, as a big bonus in a mobile society. Customers will also be served by more sophisticated investment-planning products at all levels and the bank will service high net worth clients with JPMorgan Private Client Services and JPMorgan Private Bank.

Berthelot is pleased with the transition so far and adds that customers should continue using their Bank One checks until they re-order, when Chase checks will be issued, as well as existing Bank One debit and ATM cards until they receive new Chase cards through the mail in a few weeks.

JPMorgan Chase is a global financial services firm with assets of $1.2 trillion and operations in more than 50 countries.

OATS AND BROWN ARE TOPS IN THE TOWN

Congratulations to the field of 19 candidates who raised more than $100,000 in 12 weeks for The Leukemia and Lymphoma Society of Louisiana! When the dollars were all counted after the auctions at The Grand Finale two weeks ago, LGMC administrator Sylvia Oats and Schlumberger lead technical advisor Douglas Brown were declared Man and Woman of the Year for raising the most in the group. The funds will help the infant leukemia research at Tulane Medical Center and provide family services for those in Louisiana who are under treatment for blood cancer.

THERE'S A NEW MANAGER AT BROTHER'S

Jay Rosenzweig has joined Brother's as manager/buyer for the men's division. With more than 30 years experience in the trade, including stints with Bernini, Belk, Dillard's and most recently as sales manager at venerated downtown New Orleans men's store Rubenstein's, Rosenzweig is also a military veteran and served as captain in the Infantry. He heads to his first market representing the store this week.

Sharon Moss was one of 10 finalists in the American International Automobile Dealers Association for the 2005 Dealer of the Year Award, presented annually in conjunction with Newsweek magazine. It was her second year to make the Top 10. â?¦.Van Eaton & Romero Real Estate placed first nationally for excellence in magazine and newspaper advertising and received two citations for exemplary work in the relocation market. The firm's relocation director, Sonia Vice, accepted the award at the annual conference in Scottsdale, Ariz. Local ad agency Right Angle created the award-winning marketing piece. â?¦ Acadian Ambulance founder Richard Zuschlag was inducted into "The Order of Living Legends" at The Acadian Museum in Erath. â?¦ LAGCOE's a sell-out, once again. Mark the dates of Oct. 25-27 on your calendar and join more than 16,000 attendees from 20 nations at the event.