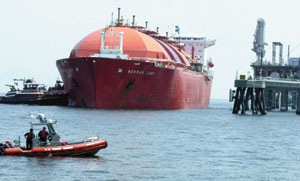 A rare coalition of commercial fishermen and environmentalists is facing a critical stage in its fight against offshore "open loop" Liquefied Natural Gas terminals. The group, calling itself the Gumbo Alliance, is opposing a slew of proposed open loop terminals because of the threat they pose to Gulf marine life ' a threat proponents of the LNG terminals say is grossly exaggerated.

Earlier this month, the 5th Circuit Court of Appeal in New Orleans heard a landmark case challenging a federal permit for a Liquefied Natural Gas terminal 38 miles off the coast of Cameron Parish. The suit ' filed by the Gulf Restoration Network, the Sierra Club and the Louisiana Charter Boat Association ' contends the Maritime Administration did not adequately consider the environmental impacts of the $700 million Gulf Landing terminal it permitted in February 2005. Represented in court by a student attorney from the Tulane Environmental Law Clinic, the coalition says it is not opposed to the LNG terminal being built but insists it should be required to use a closed loop system to reheat the imported gas.

Open loop LNG terminals take in up to 150 million gallons of seawater in a single day to help reheat sub-freezing LNG. Closed loop systems burn off gas and use recycled water to reheat LNG.

An initial study by the National Marine Fisheries Service, which has advised against using open loop terminals, showed the Gulf Landing terminal alone could kill up to 3.8 percent of Louisiana's annual redfish landings. Environmentalists fear the impact could be much worse, especially with the combined affect of multiple LNG terminals now proposed for the Gulf ' three of which may eventually operate off the coast of Cameron Parish. Cameron's coast has been a popular location for LNG terminals due to its extensive network of gas pipelines.

Shell and the Department of Transportation argued in court that the effects of an open loop LNG terminal on fisheries would be minimal, and that closed loop systems are not as safe, reliable or cost-efficient. Shell has estimated a closed loop terminal would cost $43 million more annually to operate than an open loop terminal. The company issued a statement after the hearing: "Shell remains confident that we can operate Gulf Landing in a way that ensures no significant impacts on fishing and shrimping in the Gulf of Mexico." In addition, Shell told The Independent Weekly that "the government imposed strict and enforceable conditions on the Gulf Landing license that require a comprehensive prevention, monitoring and mitigation program" in order to ensure the safety of marine life.

Gulf Restoration Network officials say the environmental risks of operating an open loop system outweigh the added financial costs of closed loop systems. "I think our little David matched up against the Goliath pretty well," says Aaron Viles, campaign director with GRN. "I think these judges understand that fishing is instrumental to the way we live here."

Viles also says the judges made note of the fact that Louisiana, as an adjacent state to the offshore terminal, was given a 45-day window of opportunity to veto Gulf Landing's permit ' an option that Gov. Blanco did not exercise. Blanco has since come out in opposition to open loop terminals. The state's veto authority may now be a moot point since last year's energy bill contained a provision that allows the Maritime Administration the authority to override state opposition to LNG terminal permits.

With the hearing complete, Viles hopes for a court ruling within the next month, but decisions can sometimes take more than a year. The case represents the first court challenge to a federal permit of an LNG terminal.

While eagerly awaiting the court's decision, the GUMBO Alliance was not letting up pressure on other proposed LNG terminals. At a series of public hearings this week, the group plans to file statements opposing two other Gulf LNG terminals still in the permitting process. The Coast Guard recently completed its final environmental impact statement for Freeport MacMoRan's Main Pass Energy Hub, a terminal the company plans to build off the coast of Plaquemines Parish. Last week, Freeport MacMoRan announced modifications to the terminal that it says will further reduce the impact to fisheries. Gumbo Alliance says the changes do not go far enough and remains opposed to the open loop terminal. It is lobbying the state to block the project during the 45-day veto window that starts this week.

Initial public hearings are also slated to begin this week for Conoco Phillips' Beacon Port terminal, to be located south of Cameron Parish.

The Maritime Administration has issued three permits to date for offshore LNG terminals ' only one of which has been built. While Shell's permit has been tied up in court, Chevron Texaco withdrew plans for its permitted terminal, planned for south of Vermilion Bay, due to issues over securing an adequate supply of imported LNG.

Viles says he has already had conversations with Excelerate about working toward a more marine-friendly terminal. He also hopes a favorable ruling in the Gulf Landing case will send a message.

"Hopefully, if a clear sign is sent from the Gulf of Mexico, from our governor and our fisheries managers, that open loop is not acceptable. We hope that Excelerate at some point will be able to operate 100-percent closed loop in this region as well."