Emotional divisiveness trumped policy during the most recent hurricane-recovery session, creating an environment that could get worse before it gets better. 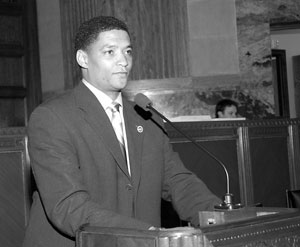 Some folks around the state Capitol still remember when former Sen. J.E. Jumonville, a Ventress Democrat, ripped off one of his boots and threw it at the Senate clock in an effort to stop time and prolong debate. That was during the final leg of Gov. John McKeithen's reign in the early '70s, when lawmakers were known to kick back a few adult beverages in their respective chambers, burn the midnight oil and get rowdy.

On one such evening, during the waning hours of the 1971 regular session, the House sent over their meanest bullies to take on a group of senators who were messing with pet construction projects. "Big John" McKeithen, as he was affectionately called, stormed over wearing a custom-made jumpsuit and refereed the ruckus. It was one of many fights amongst lawmakers that had to be broken up during that period of forced reform.

That's viewed as an unfortunate chapter in Louisiana politics ' and it's also the last time the Legislature has been as volatile as it is now. There haven't been any brawls during the hurricane-recovery sessions, but tempers have crested following Katrina and Rita, prompting lawmakers to walk out of debates, once-staid coalitions to combust and a thunderous public outcry.

"I haven't seen it like this before ' not in recent history," says Jim Brown, who formerly served as a state senator and commissioner of insurance. "There have been some major financial crises in the state and other issues, one by one, are stemming great controversy and some real soul searching."

He's not the only one looking on in disbelief. The mantra has been repeated by lobbyists in the hallways of the Capitol, during debates by lawmakers who have seen it all ' or close to it ' and by political historians wondering what's next.

The consolidation of levee boards in southeast Louisiana was one of the most contentious issues during this month's special session. Ensuing debates often ran several hours long, with lawmakers waging turf battles over which parishes should be included. Even though Gov. Kathleen Blanco backed the proposal and called the session to enact it, many of her committee chairs ' her handpicked leadership ' opposed the bill and only offered their support after compromises were brokered.

Just minutes after the Senate reached a compromise on the levee reform bill, Sen. Tom Schedler, a Mandeville Republican, took to the floor and warned his colleagues that the jostling was reaching a "dangerous" level. For once, he declared, Louisiana should be thankful for term limits.

"I have personally never seen anything like this in my 10 years," Schedler says. "A lot of us can't wait to get out of here because this is a changing environment that is like quicksand. And it's truly unfortunate for the future."

The same emotions boiled over into anger on the House side this session when a bill to set up satellite voting centers for displaced New Orleanians was initially voted down. Rep. Cedric Richmond, a Crescent City Democrat, responded by blaming racism and no clear vision on the part of lawmakers. He made a motion to end the session four days early, and 24 of his fellow House members voted with him.

"This House is more divided than I've ever seen," Richmond says. "That makes it difficult for us to get our business done."

Richmond's speech ended that evening with several members of the Legislative Black Caucus, joined by a few white lawmakers, walking off the House floor during debate.

Geographic and racial disputes in the aftermath of the storms were somewhat expected. People outside of the disaster zone aren't willing to embrace change, while those impacted are desperate for it. The end result only aggravates an already violent political atmosphere.

"Some of what is happening was predictable," says Louisiana Association of Business and Industry President Dan Juneau, head of one of the state's most powerful lobbies. "Some of it is purely bizarre. Much has to do with the fact that power abhors a vacuum and the Capitol is definitely in a power vacuum right now."

Indeed, Republican lawmakers are taking their usual potshots at the governor and even the historical north-south divide between legislators is becoming more pronounced. During one committee meeting, Sen. Robert Adley, a Democrat from Benton, slammed a bill creating a special undersecretary for hurricane protection, noting it does very little for his constituents in north Louisiana, aside from soaking up their tax dollars.

"There is another part of this state that is having to share in these costs," Adley says. "There are a lot of people viewing all this a whole lot differently."

If the issues debated during the most recent two-week special session were enough to send the Legislature into a tizzy, the coming months could provoke more chaos. There are a bevy of other issues that promise to be touchier than any of those addressed thus far ' like land rights ' and the topics could be brought up as early as the regular session this spring, which is scheduled to convene March 27.

"I don't see any break in the political climate until the 2007 election cycle," says Dr. Pearson Cross, an assistant professor of political science at UL Lafayette. "The state is in an uproar."

Leadership is at the core of the aggravation, Brown says. The governor only testified in person on a few select issues during this month's special session, and her staff was not overly aggressive in hammering home the agenda of smaller government, consolidated levees and greater election rights for evacuees.

"Edwin Edwards, Dave Treen, Mike Foster, and others previously, worked that telephone hard during sessions and had meetings with everyone involved before anything took place," Brown says. "There were breakfasts and lunches and efforts to call certain constituencies back in the districts to lean on people. â?¦ Current conditions are going to continue like this for the next two years if the governor doesn't draw a line in the dirt."

The lack of enthusiastic lobbying activity from various interests also played against the governor in recent sessions, he adds, because those forces can bring pressure on the Legislature regarding hot button topics.

According to Cross, it's all bad news for the first woman governor of Louisiana: "It's quite clear to me that the governor's prestige, and certainly any reelection hopes, hang quite literally in the balance in terms of her accomplishments from the special sessions and the upcoming regular session."

Juneau says what is most telling at this juncture is the lack of desire to reform old practices in government. If parochialism can prevent reforms from being enacted in a time of great crisis, then one has to question whether reform is possible at all, he notes. In the end, it may be up to voters to bring in such a dramatic change.

"Right now, Louisiana is at war with itself and with Washington," Juneau says. "That is not the recipe for a successful recovery from severe devastation. It is reminiscent of the acrimony that existed after the Great Flood of 1927, acrimony that led a few months later to the beginning of the Long dynasty in Louisiana politics. Power abhorred a vacuum then, also."