The Vince Marinello circus is coming back to town.

The Vince Marinello circus is coming back to town. Actually it's going to the 3rd Circuit Court of Appeal in Lake Charles, where the former sports caster will attempt to overturn his murder conviction.

Marinello was convicted here in Lafayette after the high profile trial was moved from Jefferson Parish because of the notoriety of the case, which was played out in the Times-Picayune and on all Crescent City TV stations, including WDSU, where Marinello had shared the sports desk with New Orleans icon Buddy Diliberto. Marinello is serving a life sentence in at the state penitentiary at Angola for killing his wife, Liz Marinello.

Some of the stranger elements of the case involve a "to-do" murder list detailing what to wear: "mustache, black tennis shoes, gloves," and how to dispose of the evidence: "bike-paint, clothes-burn, gun-river on way to Mama."

On Sept. 1, 2006, Liz Marinello was shot twice in the face in Old Metairie. Police were looking for "a scruffy-looking man" wearing a dark shirt, spotted by witnesses peddling away from the scene on a bicycle. The bicyclist was later identified as Marinello.

The outcome of the December, 2008 trial was a verdict of second-degree murder.

Marinello's appeal claims that the evidence used against him was circumstantial at best. According to the Times-Picayune, Marinello claims that the search warrant used to scour his FEMA trailer, where the "to-do" list was found was basically illegal. Marinello also says he wrote the list after the homicide, because he knew he was a suspect, and that he was planning to talk to his friend, then-Sheriff Harry Lee, about the case.

On par with the theatricality of the case is Marinello's claim that witness Lauren White mistakenly identified Marinello as the man on the bike. From the T-P:
She testified she realized it was Marinello after seeing his photographs in news reports of his arrest -- she recognized his "bulging eyes," she testified.

In his appeal, Marinello denies he has bulging eyes. 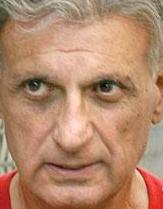