Using equipment donated by Acadian Ambulance and PSA Healthcare, local medical professionals saved the life of an 8-year-old and are helping other Haitians put their lives back together.**

He lay there on a small stretcher - stomach distended as if ready to explode; body emaciated from malnourishment; eyes rolled backwards in their sockets. Clinging to life, the 8-year-old was breathing rapidly about 60 times per minute. He was near death, suffering from the final phases of typhoid. Doctors knew that he needed surgery immediately but would not likely survive the journey to a larger hospital in Port au Prince. So, the medical team went to work, desperately trying to save the little boy's life.
** 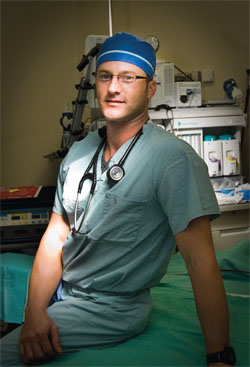 Using equipment donated by Acadian Ambulance and PSA Healthcare, local medical professionals saved the life of an 8-year-old and are helping other Haitians put their lives back together.**

He lay there on a small stretcher - stomach distended as if ready to explode; body emaciated from malnourishment; eyes rolled backwards in their sockets. Clinging to life, the 8-year-old was breathing rapidly about 60 times per minute. He was near death, suffering from the final phases of typhoid. Doctors knew that he needed surgery immediately but would not likely survive the journey to a larger hospital in Port au Prince. So, the medical team went to work, desperately trying to save the little boy's life.
Using two carbon dioxide detection devices donated by Acadian Ambulance and a pulse oximeter from PSA Healthcare's local operations, Lafayette anesthesiologist Dr. Richard Quincy was able to safely put the child asleep and place a small endotracheal tube down his throat despite his vomiting fecal matter. When the surgical team opened up the boy's stomach, they found that his bowel had ruptured, causing sepsis throughout his little body. "It was horrible, as horrible as you could imagine," Quincy recalls.

From the time the procedure started at about 11 a.m. until the anesthesia wore off at about 10 p.m., Quincy hand-ventilated the youngster to keep him alive. Afterwards, nurses stayed up all night with him, monitoring him closely. All along, his family was close by, refusing to leave the hospital. Following the all-night vigil, the boy stabilized and was transported across the island to the capitol, Port au Prince, for further care. Now, with a prognosis for full recovery, he is back home with his family.

"He would have died within hours if we hadn't treated him when we did," Quincy says. "We happened to be at the right place at the right time."

Had it not been for the medical team organized by the Haitian Association for Human Development, this child and countless other Haitians might not be alive today. Spearheaded by a husband and wife team, Haitian native Nicole Michael, a pediatrician practicing in Crowley, and husband Arshavir "Arshi" Michael, an anesthesiologist at American Legion Hospital, HAHD organized two teams of medical professionals and lay people from Louisiana to render post-earthquake aid to Haiti. These groups consisted of about 60 anesthesiologists, pediatricians, a urologist, general surgeons, dentists, nurses, technicians and other volunteers from New Orleans, Acadiana and Texas. Volunteers paid their own expenses of about $1,500 to $1,600, which included airfare, hotels and meals for the trip to LaVallee.

Among those making the July trip were Quincy, who practices at UMC, Savoy Medical Center in Mamou and American Legion Hospital in Crowley; Dr. Richard Howes, a pediatrician at UMC; Howes' daughter, pediatrician Dr. Juliette Howes Owens of Austin; Ville Platte dentist Dr. Phillipe Vidrine and New Orleans OB/GYN Dr. Charles Rene. "Most of the people in the group were from this area," Alabama native Quincy reports, "which I think is amazing, because as hard-hit as Louisiana has been over the past several years with multiple things, so many people out of this state do so much volunteer work."

Although it's been more than seven months since the devastating earthquake almost leveled the impoverished island, Haiti is still a long way from recovery. "It's chaos, just chaos," Quincy says. "There's been very little, if any, rebuilding or cleanup." Power is sporadic, particularly in rural areas; buildings remain cracked and uninhabitable; people are still living in makeshift tents and shacks. Unable to get adequate health care, Haitians are battling diseases, starvation and life-threatening conditions.

When the HAHD members arrived at the airport in Port au Prince, they went through customs in an unair-conditioned warehouse. "It was very disorganized - very hot, very chaotic," Quincy recalls. Next, the party went to a smaller adjacent airport to catch a flight across the island to Jacmel. From there, they traveled in vehicles up the mountains on treacherous unpaved roads to reach their destination, LaVallee. The groups stayed at a hotel called L'Auberge, which had intermittent power and no air conditioning - a far cry from the luxurious casino resort of the same name in Lake Charles.

During the nine days the Louisiana/Texas contingent spent in Haiti, the medical team treated a continuous line of patients, many of whom had walked miles to get to LaVallee. While there, volunteers worked eight- to 12-hour wdays without air conditioning in hot, humid and dusty conditions. "It felt very much like it does here, but there's no A/C, so you couldn't get away from it," Quincy says.

The medical teams provided a wide range of services, including pediatric, surgical, OB/GYN and dental. Out of a single operating room with two tables, Quincy administered anesthesia for about 30 procedures. Surgeries included hernia repairs, C-sections, testicular procedures and fatty tumor removals, some life-saving and others that enabled people to get back on their feet and back to work.

Quincy hopes to return to Haiti or do another medical mission elsewhere in the near future. "It makes you feel that you're actually doing something for other people," he says. "That's the reason I went to medical school - to help people."

For more information about HAHD, visit the website at www.haitiahdh.org.
Flashes

Apex Innovations, which specializes in interactive online learning for health care professionals, has recruited RN Deborah Gooch to direct clinical compliance. Gooch has more than 30 years of clinical and administrative health care experience, having worked in hospital administration, quality management, patient care services, nursing services, physician relations and as a consultant. Gooch earned a master's degree in health service administration and a BS from St. Joseph's College and a Diploma in Nursing from Our Lady of the Lake Hospital School of Nursing. She is a fellow in the American College of Healthcare Executives.

Amid laughter and cheers, nearly 700 survivors, family members and caregivers celebrated at OncoLogics Inc.'s 17th annual National Cancer Survivors Day at the Lafayette Hilton. The afternoon was highlighted by an appearance from special guest New Orleans Saints' punter, Thomas Morstead (above).  "Thomas Morstead's mother is a 10-year cancer survivor, so he was able to make a real, personal connection with our patients and their families," says Nichole Forstall, chief operating officer of OncoLogics. This year's event broke attendance records.

Dr. Wade May is now seeing patients at Cardiovascular Institute of the South's new Youngsville clinic at 1516 Chemin Metairie, Suite 100 B. CIS is a comprehensive cardiovascular medical practice that specializes in preventing, detecting, and treating heart and vascular disease. A native of Alexandria, May has served as a staff cardiologist for CIS in Lafayette since 2009. He is board certified in internal medicine, cardiovascular disease and nuclear cardiology.