Rusty Cloutier, president and CEO of Lafayette-based MidSouth Bank, has returned from an invitation-only roundtable at the Federal Deposit Insurance Corporation where he gave the big boys hell. 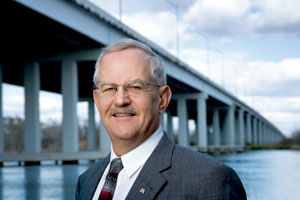 Rusty Cloutier, president and CEO of Lafayette-based MidSouth Bank, has returned from an invitation-only roundtable at the Federal Deposit Insurance Corporation. Cloutier attended as a representative of the Independent Community Bankers of America, joining FDIC Chairman Sheila Bair and the heads of some of the United States' biggest financial institutions - Bank of America, Citigroup, Goldman Sachs, JPMorganChase, Morgan Stanley and Wells Fargo among them, many of whom were party to the financial meltdown of 2008 that prompted the Dodd-Frank Wall Street Reform and Consumer Protection Act signed by President Barack Obama in July.

Cloutier was quick to note the distinction between small community banks and the "too big to fail" institutions also at the table. "Let me say this, I know some of my comments are not going to be well taken by some of my counterparts. I also represent the Community Bankers of America, one of the few who supported the Dodd-Frank bill, or many parts of it, and a lot of money was spent by my counterparts here to defeat this bill, unsuccessfully."

The purpose of the roundtable, held Tuesday at FDIC headquarters in Washington, D.C., was to solicit views from a wide range of interests in the U.S. financial sector. The MidSouth president was frank in his assessment of the problems facing the sector.

Following the meeting, Cloutier reiterated his view that community banks are a major fuel source for America's economic engine - a belief he has also aired before the House Banking Committee in previous hearings on the meltdown. Cloutier has also advocated, including at Tuesday's FDIC event, breaking up large financial institutions when their insolvency threatens a cascade effect across the U.S. economy.

"Community banks like mine are the backbone of our nation's economy now more than ever as they continue to support and drive the economic needs of their local communities in cities and towns throughout America," Cloutier said. "To further promote financial stability and end too-big-to-fail, it's critical that the FDIC have resolution powers to liquidate systemically risky institutions in an orderly manner so that they never again have the ability to nearly topple our nation's economic system, as they did almost two years ago."

Cloutier is author of the 2009 book, Big Bad Banks: How Greed and Ego Among the Big Shots in Banking and Government Created the Crisis that Wrecked Our Economy.