By all indications, this most recent Gulf emergency will not share the same level of devastation caused by the April 20 explosion of BP's Deepwater Horizon rig, which claimed 11 lives and let loose some 4.9 million barrels of oil. 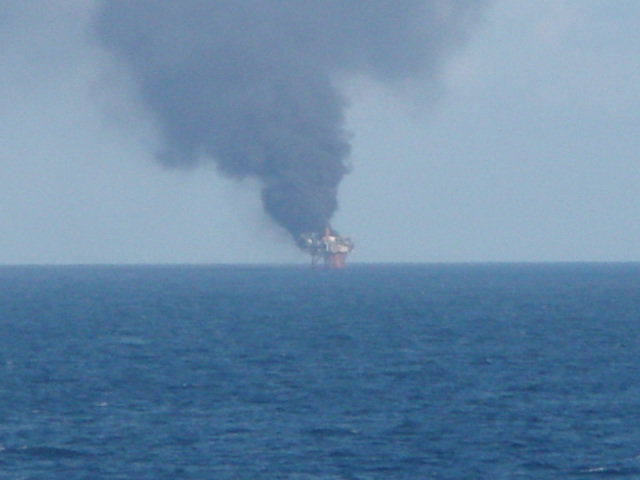 The latest fire happened around 9 a.m. Thursday just south of Vermilion Bay on the Mariner Production Platform, owned by Mariner Energy, which is based in Texas but also has offices in Lafayette. Several investigations are still ongoing and there have been varied reports on the exact amount of oil leaked into the Gulf. Officials were looking for an oil sheen as late as last night and most accounts indicated minimal pollutants. There were no fatalities and 13 survivors.

Though dramatically different in scale, the two rig explosions were nonetheless linked continually throughout the day in public official's comments, beginning with Jindal's homeland security press conference in Baton Rouge. About halfway through his presentation, the governor differentiated the 5,000 miles of water the BP rig was in from the smaller scale rig operated by Mariner. "I also want to point out that the platform is in 340 feet of water, making it a shallow water well," Jindal said.

The original moratorium from President Barack Obama, issued in response to the BP incident, applied only to rigs in 500 feet of water or more.

While the most recent explosion did little to sway crude prices in the markets Thursday, it did draw a rigid statement from U.S. Rep. Edward J. Markey, a Massachusetts Democrat who met with coastal residents last month during a congressional hearing on Gulf seafood safety. "This explosion highlights the significant risks associated with offshore drilling, and that much is left to be done to keep America's workers and waters safe from those risks," Markey said.

Officials closer to home wanted more answers about this week's incident before the Mariner and BP rigs are lumped together. "Once the disaster is under control, we must thoroughly investigate the cause of the accident and take whatever steps are necessary to prevent future incidents," said U.S. Rep. Charlie Melancon, D-Napoleonville, who represents portions of Acadiana.

Even in Washington, D.C., the Obama administration voiced the same kind of concern. "I don't want to marry those two up," White House Spokesperson Robert Gibbs told reporters during a press briefing Thursday.

Still, that didn't stop special interests from doing just that in the wake of the Mariner explosion. The Louisiana Bucket Brigade, a statewide environmental advocacy group, circulated a statement shortly before Jindal's press conference. "This news is sadly not surprising - this industry has a problem," said Anne Rolfes, founding director of the LBB. "Refineries on shore, platforms, pipelines and rigs offshore have a clear, established pattern of accidents. We need enforcement of regulations so that this dynamic will change."

For now, Jindal said supplies are on the standby should there be further need or another incident occurs. Equipment last used in the BP spill is on the ready as well. "As we learned during hurricanes and the Deepwater Horizon rig explosion," Jindal said, "we must prepare for the worst and continue to hope for the best in these types of incidents."