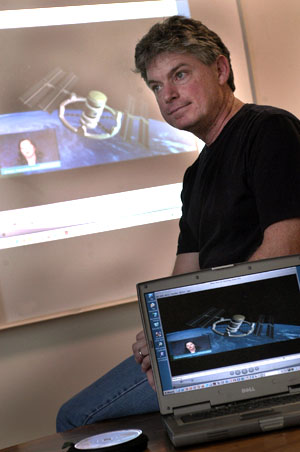 Lafayette Utilities System's contentious fiber-to-the-home plan has sparked heated debates throughout the community. The public utility is proposing to build a $135 million fiber-optic network to deliver phone, cable and high-speed Internet services to city residents. Organizations ranging from the local Republican and Democratic parties to the Acadian Homebuilders Association have all weighed in with their opinions on the topic. Talk has ranged from the issue of the digital divide to the proper role of government.

As the July 16 vote on the issue approaches, one notably absent participant in the conversation has been UL Lafayette. The university has not taken an official position on the issue. UL Vice President of Research and Graduate Studies Robert Stewart says that when it comes to fiber, "The university does not have any comments." UL President Ray Authement did not return calls to comment for this article.

Although cautious not to speak for the university, several professors ' including specialists in education, English, physics and business ' willingly give their own opinions on the issue.

Paula Carson, associate dean of UL's College of Business Administration, says she has been disappointed with how emotions and politics have clouded a lot of the discussion about LUS' proposal. "I think it's very difficult in this type of environment for consumers to make an informed decision," she says.

Carson particularly expresses concern over scare tactics she says the project's opponents have used to try to discredit LUS' plans. "There are risks inherent in the project," she says, "but all worthwhile ventures contain some risk, and I think that [the risks] have been carefully calculated."

Carson believes LUS' investment would be sound and plans to vote in favor of the project. "The infrastructure investment will demonstrate that Lafayette is committed to economic development," she says. "I think fiber to the home will be symptomatic for those looking to do business in Lafayette that we're a progressive community."

Carson's colleague Lewis Gale, dean of the College of Business Administration, agrees. He contends that while some economists generally oppose government competition with private industry, he doesn't feel the issue is that cut and dry. "Utilities are a good example," he says. "There's not just one model that works the best. You have some examples where you have some public utilities more effectively providing services and others with private utilities better providing the services. LUS has a strong track record. They're more competitive than other [private] utilities in this region."

Gale, who is leaving Lafayette for a similar post at a Utah university, hopes the debate over LUS' fiber network evolves beyond the immediate issue of who can best provide low-cost phone, cable and Internet service. "What I would like to hear people talk more about are the services of tomorrow," he says. With a fiber-optic network connecting every house in the city, Gale says LUS' customers could more accurately monitor their energy usage, helping them to conserve and save money.

The fiber-optic network's ability to transfer large volumes of data at high speeds is also likely to benefit small companies and home businesses in the area, Gale says. "It changes the dynamics and environment in which these businesses can participate," he says. "It makes them more competitive. There are specific things such as an entrepreneur being able to run their business more efficiently from their home. I think that overall the idea is good, and the time is now."

Although Gale supports the LUS proposal because of its economic development potential, he cautions that since the issue is so new, there is little evidence from other communities to indicate whether LUS' business model is the best option. "It's difficult to say that 20 years from now the model that LUS is proposing is going to be the best for the area," he says. "That's one of the reasons I've been on the sidelines. It's just not that clear cut."

English professor David Thibodaux, who also sits on the parish school board, is one UL faculty member who is having a hard time deciding whether the LUS business model is one he can support. "I'm on the fence," Thibodaux says. "Clearly a fiber ring in Lafayette would be a good thing. The problem I have is the source of it and how we should pay for it."

As a conservative Republican, Thibodaux says he is generally opposed to government competing with private industry. "That's basic conservative doctrine," he says. "That's what we're supposed to stand for, less government and more private business."

Conversely, John Meriwether, who heads up UL's physics department, says his political philosophy matches up nicely with what LUS is attempting to do. "I've always had a kind of egalitarian view on how government should work," he says. "I think it's a very positive move because it takes an issue in the public interest rather than wait for the companies to decide what's right for the community based on their profits. I think communities ought to do things cooperatively rather than just buying everything."

Another enthusiastic supporter of LUS' plan is Doug Williams, an assistant professor in the College of Education and the director of the Center for Innovative Learning and Assessment Technologies. Williams helped found the center a year ago to develop educational computer software programs. "Most kids find traditional schooling to be irrelevant and not engaging," Williams says. "We're using education technology to help kids engage in authentic activities that are very consistent with what we adults do in the real world."

With the greater Internet speeds that come with a fiber-to-the-home network, Williams says parents, students, teachers and administrators ' throughout all levels of education ' could access these types of learning applications from home. In addition, cleaner, faster video feeds could foster the burgeoning possibilities of long-distance learning. "You can really break down the traditional barrier that typically exists between schools and what [students] can do from home," Williams says. "I only see advantages [to the LUS plan]. I think it's a great project particularly for the educational side, whether it's kids in school having access to rich interactive multimedia resources or home schoolers, community college and university students."

From his vantage point at the UL-housed radio station KRVS, Chief Engineer Karl Fontenot sees how a high-speed fiber network could be a double-edged sword. While the system could allow KRVS to upgrade the quality of its audio to area Internet users through its Web site, Fontenot says a fiber network could also impact radio in the same way the proliferation of television did in the 1960s.

"In one way I think it would negatively impact radio in general because people would have better access to audio, video and voice data," Fontenot says. "There's more information out there, so it may lead people away from traditional radio."