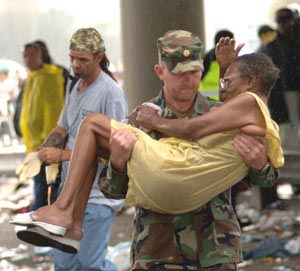 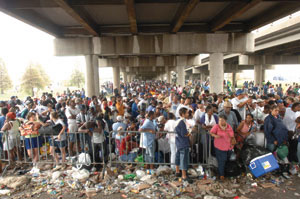 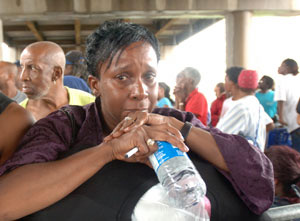 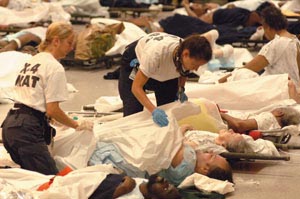 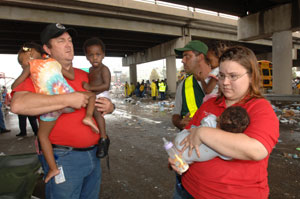 It's noon Thursday, three days after Hurricane Katrina ravaged New Orleans, and MedExpress Ambulance Service medics Angela Stokes and Billy Spencer are in Baton Rouge heading back to the intersection of I-10 and Causeway Boulevard, an expansive relief and transport area for refugees. They've already transported about 35 Hurricane Katrina evacuees to LSU's Pete Maravich Assembly Center, which has been converted into a hospital. But just after midnight Wednesday, they got word the center was full and they'd be taking patients to the Louis Armstrong New Orleans International Airport.

Heavy rain begins to fall. As Spencer drives down I-10, Stokes turns around from the passenger seat and describes what awaits at both the Causeway staging center and the airport. There are no port-o-lets at the Causeway for medics or patients. At the airport, there is a drastic shortage of medical equipment and supplies, and the conditions are deplorable. "That's the only place we can take them," Stokes says.

"The last trip we took we had seven in this little van, one of them a baby less than two weeks old. They've been loading us down," says Stokes, who has had little sleep since being called out from their Colfax, La., station Monday night. "They told us we couldn't go anymore until we got sleep."

When they arrive at the staging center around 1 p.m., medics already on duty are running straight shifts on little more than adrenaline. They are tending to seven children, ages 6 to an infant, who had just been rescued from an apartment roof by a military helicopter. A National Guardsman who brought the children in told Acadian Ambulance medic Robert Clement that they were on the rooftop with a neighbor, who now could not be found.

Demonte Carlos Love, a spirited 6-year-old boy who helps a reporter spell out his name, says his dad put them on the roof. "He's still in the house," Demonte says of his father. "My mom is too. My mom was crying."

One of the girls, about 2 years old, clings to Clement, and he seems unwilling to give her up until her parents can be located. It's apparent in his face that he fears the worst. He gets word that Social Services will take over the children's care from the Bureau of EMS in Baton Rouge. "When I gave her away on the ambulance, she told me she loved me," Clement says. "I cried all the way home." (By late Friday he was still trying to find out if the children's parents had been located.)

By mid-afternoon, the rain has stopped. It was enough to cool off the thousands of refugees who have gathered at this sprawling interstate site, where those with medical conditions are treated and evaluated ' and the rest just wait. Most here have been rescued by air or boat, and for many it's the first food and water they've had in days. They line up behind barriers on the side of the muddy interstate ' now completely littered with trash and filth. They are exhausted and bewildered, waiting for buses to take them to unknown destinations.

"Say miss, do you know where we're going?"

It's the most common question of the day, and no one can answer it.

Throughout the day Army and Coast Guard helicopters fly in with survivors, and armed National Guardsmen travel in convoys over the Huey P. Long Bridge to Algiers, where they are picking up refugees brought over by ferry from small towns across the river. Before the soldiers depart for the last transport of the day, Ray Lasseigne of the Gretna Police Department tells them there's just been a shootout on the West Bank, where the Oakwood mall is on fire. "I'll give you one better than that," Lasseigne says. "They're shooting at the rescuers trying to rescue them."

"I ain't seen nothing like this since the war," guardsman Jeff Smith of Black Lake says from the back of a deuce and a half Army truck on the trip to Algiers. Smith, who served in Iraq for a year, says the environment is disturbingly familiar. "They have no home to go to," he says. "Stuff like this just hurts my heart. It's my own people."

And they are dying by the hour. Those still in their homes, waiting in the streets and in hospitals, and even those in the deteriorating shelters ' like New Orleans' airport. A sea of despair, the airport is scattered with bodies, mostly elderly people getting as much attention as the skeleton crew of medical personnel can provide. Even basic equipment is not available.

Later that evening, Charity Hospital nurse Robyn Givens arrives at the airport via a Blackhawk helicopter. She is manually pumping oxygen into an elderly stroke patient with a tracheotomy. She'd been at the hospital since Sunday at 7 a.m.; after the storm, food was rationed, all communication was down, and windows had to be broken to get air into some hospital rooms.

"All of the employees are still at the hospital," Givens says. One of the oldest hospitals in New Orleans, Charity is not getting any assistance or communication from officials, and the doctors have taken it upon themselves to organize evacuations while patients keep coming into the public hospital. "The nurses would work 12-hour shifts, and even after [they took breaks] the doctors were still working," she says. "The ER looked like a MASH unit."

Across from Charity at Tulane University Hospital, where water is chest high, conditions aren't much better. Rick Gist, a resident physician at Tulane, has been working since Friday before the storm and came to the airport with his patients.

Medical personnel at the airport are distraught that their hospitals received no assistance, and they plead with reporters to let the country know patients are dying and there are still hundreds of employees and patients who need to be evacuated.

"We have no power, no sewer, no linens, no water. Everyone with a surgical incision has an infection," Gist says. "We need real help from the government. It is a war zone."

On Friday night, CNN reports that more than 40,000 people have been treated at the airport ' 800 every hour. By Saturday morning, Charity had finally been evacuated. But the rescue efforts were too late for at least two patients waiting on ramps.