The Louisiana State Board of Examiners of Interior Designers is taking a hard look at a number of Lafayette's interior decorators. 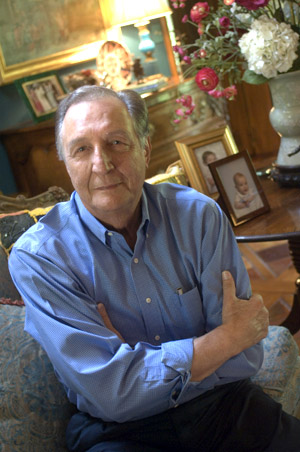 Earlier this year a Mandeville interior decorator was fined $1,500 by the Louisiana State Board of Examiners of Interior Designers for three incidents of advertising "interior design" services. It was the first fine of its kind since the state board was granted policing power five years ago, but it won't be the last; in more recent weeks, the board has turned its attention to Lafayette.

Dugan was contacted by the state because ASCO bought a congratulatory ad in The Independent Weekly for the Liz&Todd firm after it won a commercial design award for work on a local orthodontist's office in The Independent's March 2005 INDesign Awards.

"As a manufacturer of a product, if we know what's going on, then we have an obligation to report the activity," Dugan says. In this case, Dugan, who has known principals Liz Dejean and Todd Zimmerman for years, was unaware that their firm did not have a Louisiana license.

"Graduating from a university with a four-year [degree] does not make you an interior designer. Being a member of a professional organization (like the American Society of Interior Designers) does not make you an interior designer. That comes strictly from the state," says Dugan. The licensing requirements in Louisiana include a six-year combination of education and experience and successful completion of the three-part National Council for Interior Design Qualification exam, a rigorous test that costs $700 to $800 and queries applicants on principles and practices of interior design, contract documents and administration, and schematics and design development.

"For lack of a better term, it's a bar exam for interior designers," Dugan says.

"We're looking at people who know better, for the most part," says Baton Rouge attorney Anna Dow, who has represented the LSBID since the mid-80s. Dow estimates "it's probably more than 10 and less than 50" individuals statewide who are under scrutiny for potential violations of the act, which in January 2000 changed from a "title act" to a "practice act," giving the board the teeth it needed to crack down on violators.

Under the 1984 title act, unlicensed designers could not call themselves interior designers; the new act gives the board regulatory authority to prevent them from practicing in certain arenas without a license and is intended to help the public identify which designers are qualified by experience, education and testing. Each violation of the law carries a maximum $500 penalty. Dow says those grandfathered under the previous title act, because of experience, education or a combination, also had the opportunity to be grandfathered under the new statute, provided they completed continuing education hours on building codes.

"Ninety percent of the people practicing interior decorating or interior design don't even know this law exists," says Dugan. "It's never mentioned in any continuing education [classes]." ASCO is in the process of sending a copy of the law to the decorators and designers that buy its products.

Dan Bouligny of Lafayette, who retired from his 50-year interior design practice about a year ago, says Lafayette has a wealth of talented decorators who just need to prove their skills on paper. "All of these people are good designers. They have just missed a step. Eventually, they'll all have to comply," says Bouligny, who chairs the state board and has been at the forefront of the licensing push.

Dow says members of the profession have had ample time to come into compliance. "We require our [licensees] to be familiar with all fire codes, life safety, building codes, Americans with Disabilities Act requirements. They have to know those rules just as architects do."

Of particular concern is flammability of fabrics like drapery, toxicity of materials, asbestos and mold issues, along with entrants and exits for fire safety. "It's a matter of health, safety and welfare," Bouligny says.

"Decorators" who range from those with a degree in design to housewives with a keen eye are allowed to only provide residential services, though some restrictions apply. Interior designer Charles Seale of Eunice says the law only allows for surface work, such as painting and moving furnishings; anything that has to do with building codes, like moving load bearing walls, or specifying certain types of lighting, is forbidden.

The LSBID, however, seems to be focusing its efforts on commercial violators.

And unless there is latitude for interpretation of the law, Judy Dunn of Dunn's Designs would be in violation for the work she did on KATC TV3's set. Dunn consulted on the job, painting a couple of walls and bringing in some furniture, and in return gets a mention in the station's credits. "I never even thought about it, to be honest," says Dunn.

Dow says even this type of "consulting" on a commercial job would likely be a violation. "Even if it's just about color," she says.

Not everyone with LSBID, however, is on the same page. "The intention is not to over-police the issue," says Debbie Steinmetz of New Orleans, a veteran LSBID board member. Somebody hanging a picture in an office would not be in violation, nor would any other incidentals not governed by a code, she says.

Dunn, who works out of her Rue Louis IX showroom and calls herself a "home and office accessorizer," was also recently asked to work on another commercial job. When she ordered window coverings, Dunn says ASCO alerted her that this type of work requires a licensed interior designer, so she enlisted the help of Dione Bourgeois, who is licensed by the state. "I have worked too hard to get my business to where it is. I don't want to break any laws," Dunn says.

Additionally, Dunn has a degreed designer on staff who is now studying for the NCIDQ exam. "Whatever I have to do to make it right, I'll do it," she says.

If someone without a license wants to do commercial work, he or she should partner with a licensed designer or architect, who can provide the required expertise and oversight, says Seale, who has offered his services to decorators.

Dejean and Zimmerman, who won the design award as Liz&Todd, have since dissolved their professional relationship. At the time they undertook the commercial job, Zimmerman was licensed in Texas, though that license is now delinquent due to non-renewal. Licensing does not transfer from state-to-state, and he has not taken the NCIDQ test. Texas grandfathered him in, as did the professional organization ASID, which now requires the national test for professional membership. (The Independent's contest requires Louisiana licensing for commercial jobs, and the judge assumed Zimmerman had taken the NCIDQ because of his ASID membership. The firm had also written "Louisiana license pending" on its application.)

Dejean, who has a degree in marketing, is pursuing a solo career and says she will continue to call herself a designer. "I do graphic design. I do event design. I do floral design. I am a designer," Dejean says. "I cannot call myself an interior designer."

For his part, Zimmerman sticks by the decision to do the commercial work (consultation on the job actually began while he was still in Texas), which was for a family member. "I was definitely qualified to do it," he says. He plans to take the NCIDQ test this fall, though he doesn't believe it's necessary. "It's all about money for the state," he says.

Dow says the board is throwing a wide net over the profession and is inquiring into at least two more Lafayette firms. Those doing interior work cannot call themselves "designers" in the context of this specific type of work, even if they delete the word "interiors," she says. The verdict is still out on whether they can use the term "design consultant." Says Dow, "It appears to the board that they're trying to skirt the law. What's wrong with the term interior decorator?"

Monique Breaux, a residential decorator and principal owner of POSH Exclusive Interiors, appears to be in violation of the state statute. Recently featured on HGTV's Designers' Challenge, Breaux, who is not licensed, refers to herself as a designer throughout her Web site and states that she is a member of ASID. She is an "allied" member, the category that only indicates she has a bachelor's degree in interior design. Breaux was unavailable for comment.

Eunice interior designer Seale doesn't waste his time on the name game. "As long as they're doing it within the framework of the law, I don't care what they call themselves. When [a client] calls me 'my decorator' instead of 'my designer,' I don't care. I just want them to call me."