Cox, LUS and AT&T compete with the latest in TV programming and high speed Internet advancements. By Nathan Stubbs

You're standing what seems like only a few feet behind Tiger Woods as he lines up for his second shot just outside the fairway on a par 4 at Whistling Straights, the scenic Wisconsin course along Lake Michigan hosting the 2010 PGA Championship. You're within arm's length of his club as he draws it back to line up his shot. As he rips the ball forward, the divot flies up just in front of you. For his next shot, on the green, you're hovering just above the action, with a whole new perspective on the slopes and curves at play with each put.

Cox, LUS and AT&T compete with the latest in TV programming and high speed Internet advancements. By Nathan Stubbs

You're standing what seems like only a few feet behind Tiger Woods as he lines up for his second shot just outside the fairway on a par 4 at Whistling Straights, the scenic Wisconsin course along Lake Michigan hosting the 2010 PGA Championship. You're within arm's length of his club as he draws it back to line up his shot. As he rips the ball forward, the divot flies up just in front of you. For his next shot, on the green, you're hovering just above the action, with a whole new perspective on the slopes and curves at play with each put
.
This is the bold new world of 3D TV - proudly displayed on a 3D High Definition big screen in the lobby at Cox Communication's Lafayette headquarters. And while 3D TVs are still rare, rarer is 3D programming - programs shot with special 3D cameras. (The technology also requires viewers to wear special 3D glasses.) But recently Cox offered both this year's Masters and PGA Championship tournaments, both of which have been specially released in 3D format by ESPN, as a 3D Video-On-Demand. Only the few early adopter Cox subscribers with 3D TVs will be able to enjoy this, but for Cox, it's worth the investment to get ahead in the ever-competitive telecommunications market.

"We're starting to see more and more [3D content] coming out," says Cox spokeswoman Ann Ruble. She adds that ESPN, the Discovery Channel and some of the premium movie networks are all looking into producing more 3D content. "As there's more and more HD 3D TVs in the market and more programing available," Ruble adds, "we're going to constantly be looking at what we can provide."

While 3D remains on the bleeding edge, High Definition and Video On Demand programming are becoming industry standard. Again, Cox, the largest cable provider in the local market, is on the forefront of the trend. Cox currently offers 81 HD channels in the Lafayette market. It plans to have 100 by year's end. (Competitor LUS Fiber now offers 40 HD channels with plans to add more in the coming months.)

Cox also boasts a wide variety of On Demand programming - automatically recorded for digital subscribers to view whenever they want - from network primetime shows to specials to sports. Knowing its market well, Cox includes in its On Demand programming the Saints, LSU and UL football games, as well as high school football from both Lafayette and Baton Rouge. In the business, this trend is known as "time shifting."

"We're seeing more and more customers moving to a digital platform so they can get On Demand," says Ruble, who also uses the industry term "time shifting" to denote the On Demand phenomena. "The whole issue of time shifting," she continues, "people wanting to watch things when they want, how they want, is becoming more and more important to consumers. People don't want to have to wait to watch something or they don't want to miss what they might not have seen. The whole On Demand platform, whether it's primetime shows, movies or network programming, they want all of that. This is actually having the programming at your fingertips." 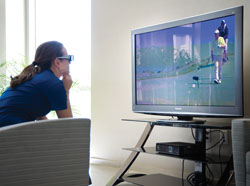 Cox has been offering the 2010 Masters and PGA Championship in 3D as part of its
3D Video-On-Demand.

All of these features, as well as some special promotional offers that ask customers to sign a two-year contract, are part of Cox's evolving strategy to hold onto its clientele amid increased competition in the area. LUS Fiber represents the biggest threat to Cox's continued dominance. Having launched in February of 2009, the public utility's telecommunications business is still in its adolescence and is finishing up the buildout of its fiber-to-the-home network. LUS Director Terry Huval says he expects that to be complete by the end of September, at which time the business' cable, phone and Internet services will be available to all city residents.

Huval acknowledges LUS Fiber has lagged behind Cox in areas including HD channels and On Demand programming but accentuates the positive in what the business has already accomplished. With direct fiber lines running to each home it services, LUS Fiber has broadband capabilities above and beyond its competitors. "Individuals who need virtually zero lag time for data communications, whether for business or for interactive gaming, tell us our system is the fastest there is," Huval says. "As we have said from the beginning, it is the Internet that is going to be the ultimate medium for communications and transfer of large video files. The future of communications, and the fundamental justification behind this fiber system, is the broadband and the Internet."

In fact, in September the municipal telecom provider began taking orders for Internet service at symmetrical upload and download speeds of 100 megabites per second. The service, to be sold at a price of $199.95 a month, doubles LUS' previous top offering of 50 Mbps for residential Internet (at more than double the price) and matches the top-line Internet already offered to commercial customers. Huval says the company has received "a number of requests" to expand the 100 Mbps service to residential customers. He adds LUS Fiber continues to be pleasantly surprised by the higher levels of service being sought by the average residential and commercial customers. "The level of service [being sold] is higher than we expected," he says, "which is very positive."

Huval adds LUS also is in final tests for a 1 Gbps connectivity using its fiber to the premise network. "Initially, we will use this architecture to facilitate service to multi-occupancy office buildings," he says, "but in the future we will be able to offer 1 Gbps to individual homes and businesses. This demonstrates how robust and powerful our network is in that we can easily catapult to the next order of magnitude of broadband capability simply by upgrading the end device to the premise."

Still, Huval points out that LUS Fiber is not neglecting its TV services. This summer, the company began the switch to Microsoft Mediaroom, a much improved digital cable interface and DVR system from LUS' previous cable software. Huval says the business will be adding much more On Demand programming in the coming months, and that LUS Fiber has budgeted to add more HD channels in the next fiscal year beginning in November.

"We have a budget we're going to live within," Huval says. "The HD programming for us, there's a significant cost for each additional HD channel we place on our system, so we have to pace ourselves in order to make those enhancements."
Huval adds that built-in On Demand programming may be somewhat overrated, as he is seeing many LUS customers use diverse gaming consoles like the Xbox 360 or their computers to cheaply download movies and programs through services like Netflix. "With our tremendous Internet speeds," Huval writes in an email, "customers are telling us they can download movies in seconds - and full HD movies in less than 3 minutes."

The differences between Cox's and LUS' service are evident in their own television ads. While Cox highlights having the most HD channels and On Demand programming, LUS stresses its local ownership and roots, as well as offering "the fastest Internet in town." 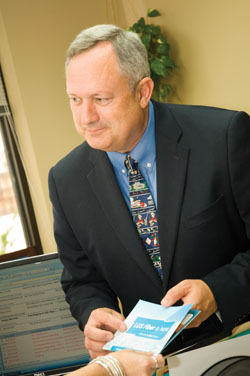 Director Terry Huval says LUS is in final testing for a
1 GBps connectivity using its fiber to the premise network.

"We find customers are excited about the opportunity to buy service from us," Huval says, "because it's their community-owned system, and they see it as a real progressive thing for the community."

Both Cox and LUS Fiber and satellite cable provider Dish Network and Direct TV - which has partnered with AT&T to offer bundled cable, phone and Internet packages in Lafayette - are now largely unfettered in their competitive strategies. On Sept. 9, the Federal Communications Commission issued an order, in response to a petition from Cox, declaring four of Cox's service areas in Louisiana - mainly Baton Rouge, Lafayette and the surrounding areas - to have "effective competition."

Having "effective competition" essentially deregulates the market; the main effects being that carriers no longer have to offer uniform rates or promotional deals throughout a franchise service area. The designation comes after Cox showed significant penetration by satellite TV competitors and other multi-channel cable providers, namely LUS in Lafayette, Eatel in Ascension Parish and AT&T's U-Verse Service in Baton Rouge. (AT&T says it has no plans at this time to bring U-Verse to Lafayette.)

"We welcome the FCC's decision because it recognizes the hyper-competitive telecommunications market in the regions we serve across south Louisiana," says Cox's Ruble. "This gives us the opportunity to compete on a level playing field with all of the video providers including satellite, AT&T and smaller operators."