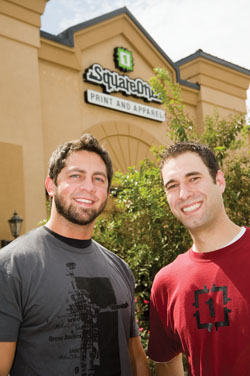 The three buddies/business partners grew up in the same Lafayette circles. Cormier and Fontenot have known each other since grade school, when they played pick-up basketball. Both graduated from St. Thomas More and joined the same fraternity at UL Lafayette. During college, the two bartended: Fontenot at Legends downtown and Cormier at Tsunami across the street.

While pursuing his major in graphic design, Cormier discovered his true passion - painting. Modestly, he admits that he sold every piece he ever created, showing this reporter an iPhone image of one of his most popular works, a painting of New Orleans Saints quarterback Drew Brees post-Super Bowl dunking a football over the goal post. New Orleans landmark Jackson Square and the mighty Mississippi River serve as the backdrop for the dramatic depiction (caught in the emotion of the moment last year, Brees did dunk the football over the 10-foot high crossbar after scoring against Miami). "After I did the painting, I got so much feedback that I decided to make a stencil of it and keep it going," he says. Eventually, he aspires to incorporate that design onto T-shirts at Square One.

Fontenot started at the bottom of the ladder at Legends downtown, working his way up from doorman to manager in just a few months. With graduation approaching, the biology major pondered a career in medicine. Then, Legends owner Jared Doise offered him the opportunity to buy into the popular bar and eatery. Fontenot jumped at the chance, becoming a minor partner in the downtown location. Still, he wanted to keep his options open. "I didn't want to limit myself just to the service industry - I kind of wanted to venture out and diversify," he explains.

Following closely behind the dynamic duo was Decou, who had attended the same schools. Decou knew his future partners through friends and family. Cormier's mom, Linda Terry, is a vice president at MidSouth Bank, where Decou's father, Glenn, serves as regional president. [In the spirit of full disclosure, ABiz Associate Publisher Odie Terry is Cormier's stepfather.]

For the last five years, Decou worked in the wholesale T-shirt and novelty business. "I basically had a wholesale printer and a vendor's license," he says. "So, I'm actually familiar with the ordering, shipping and the ins and outs of the business. I know the money to be made here."

Fast forward to 2010, when Cormier and Fontenot were tossing around T-shirt ideas for Legends. After perusing some designs, the two had a Eureka moment: "Why not start making our own T-shirts?" Fontenot recalls. The two creative minds enlisted Decou, who had the T-shirt sales expertise, and the business was born. It was Cormier who came up with the moniker Square One.

"It's kind of our mantra: everything starts at square one," Fontenot says.

After lining up potential corporate and retail customers, the tenacious trio secured space at the corner of W. Pinhook and Verot School roads in Pinhook Plaza across from Walmart. The business officially launched this summer.

Square One's partners plan to start with screen-printing T-shirts, then progress to posters, prints and giclees. Gradually, they hope to add clothing, tote bags, purses, caps, flyers and leaflets featuring the Square One brand. "Our idea was to cut out the middle person, and do our own designs," Decou says.

Fontenot and Cormier are the creative forces behind Square One. "I come up with an idea inside of the box,' and present it to Ryan," Fontenot explains. "Then, Ryan comes up with something that's way outside of the box,' but it plays well together. That's another reason why we thought we could collaborate together and work well in coming up with the designs and things that people usually don't think of."

The designs are what Square One's owners believe will set them apart from the competition. Instead of using clip art or pre-fabricated transfers, Cormier will customize a design for every client's needs. "When most people go to a T-shirt shop, they look at a book and pick out a design," he says. "We're going to be able to sit down, and I'll sketch something out for them. We will work with anybody who needs shirts printed and has an idea, whether it's for a company or smaller projects for individuals."

After posting a handful of drawings on Facebook, the guys received enthusiastic responses. "Between the three of us, we know a lot of people, and the word has traveled fast," Cormier says. "A lot of people are looking forward to it."

Adds Fontenot, "Other companies have bigger machines and more presses than we will starting out, but I think we will have the most creative ideas and bring a very professional business to the people in Lafayette and outside of Lafayette, eventually. I just think we will bring something a little fresher. Our main goals are quality, and getting something that you might not get somewhere else."

Another business distinction is their youth. "Everyone here is young, fashion-oriented and knows what's hot out there," Decou says enthusiastically. "We think there are no limits. We have a lot of time and a lot of creative ideas."