As their labor strike enters its second month, PHI union helicopter pilots dig in for a long standoff with company owner Al Gonsoulin. 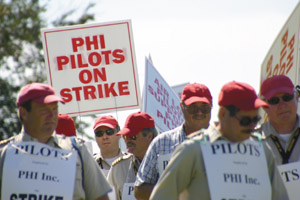 Each morning at 7 a.m., Mike Riley and six other veteran PHI pilots march diligently out in front of the company office on Evangeline Thruway, set up their signs, and sit in folding chairs and watch as their former co-workers begin arriving to work.

"We want them to see us," Riley says, turning his head to the parking lot behind them. "They'll peek out their windows and make sure to see that we're still here. You got people that have been friends for 30 years, that right now are not supposed to talk to each other. Which I think is pretty low."

"Some of them that know us will wave," says Richard Laughlin, who stands in front of Riley wearing a camouflage jacket and his red union hat, "but they would not be working here at the end of the day if they came out here and said hello."

Riley, who's flown transport helicopters with PHI since 1967, isn't surprised that PHI has tried to drive a wedge between the striking pilots and others who stayed on the job. "There have been problems dealing with the management of PHI as long as I've been with the company," he says. "For a long time, it involved salary, but under the current management it involved their attempts to basically bust the union. There's no other way to describe it."

This week, PHI pilots are entering the second month of their historic strike ' the first nationwide strike of an organized helicopter pilot workforce. PHI, which is headquartered in Lafayette, provides helicopter transportation to a variety of customers in the oil and gas industry, air medical industry and maintenance service companies. PHI employs approximately 600 pilots in some 16 states across the country. Estimates vary on how many pilots are now on strike, ranging from around 210 to 275. Locally, pilots estimate that of the approximately 75 pilots based in the area, about half are on strike.

Pilots began the strike on Sept. 20, following more than two years of failed negotiations between PHI management and the union over a new labor contract for the pilots. Last week, the National Mediation Board, the federal agency charged with acting as an intermediary in the labor dispute, asked both sides to respond by Tuesday, Oct. 24 to another invitation to enter back into formal negotiations and end the standoff. The union responded that it is willing and ready to negotiate, but PHI management had not responded as of press time Monday, Oct. 23.

For the union pilots, the only way to explain the reluctance of PHI management to negotiate a new contract is that CEO Al Gonsoulin, or "Big Al" as he's often referred, is bent on removing all union employees from the company.

Paul Bohelski, a representative with the Office and Professional Employees International Union, says that the National Mediation Board told him it has never seen a company so unwilling to negotiate. "This is the first time they've seen a situation where one side refuses to talk to them," he says.

PHI has been notoriously tight-lipped on its business operations in the past and is refusing to talk to the media regarding the labor dispute. In its last financial disclosure to the Securities and Exchange Commission, dated Sept. 22, PHI issued a press release stating that contrary to the union's "numerous false public statements regarding PHI's flight activity," its business has held up in spite of the labor strike. PHI said its oil and gas operations were still performing 80 percent of the normal volume of flights and that 90 percent of air medical operation flights were unaffected. The company also claimed that only 35 percent of its pilots have participated in the strike.

Union reps dispute these figures, claiming the company is minimizing the strike and that there is no way PHI's overall business has not dropped off considerably. They also say that initially, approximately 50 percent of PHI's pilots walked out on strike, but some returned to work under the threat of losing their jobs. The union says it is now holding steady with 45 percent of the company's pilots on strike.

Labor contract disputes between helicopter operators and the unions representing their pilots aren't uncommon. Before finally signing its last contract with pilots in 2004, Air Logistics, PHI's chief competitor, struggled for more than a year to reach a deal with its pilots, who also threatened a work stoppage. The company also filed suit against the union, claiming bad faith negotiations ' a legal claim PHI is also making against its pilots' union. The union pilots from Air Logistics, and other helicopter pilot unions, have rallied to support the PHI pilots' strike.

Both PHI and Air Logistics aggressively fought the formation of the pilot unions in the late 1990s. Air Logistic's union organized in 1998, while PHI's union did not form until 2001, after repeated attempts. Union organizers at PHI claimed the company managed to delay formation of the union through strong-arm tactics that coerced pilots to vote against the union. While the union ultimately succeeded in organizing, many pilots now on strike say that discrimination toward union members never ceased at PHI.

Shortly after the union formed in 2001, Al Gonsoulin, a New Iberia native who now resides in Houston, bought a controlling interest in the company and became both chairman of the board and CEO at PHI. While the company's financial footing has rebounded under Gonsoulin, pilots say working conditions have deteriorated and that Gonsoulin has taken a particularly aggressive tack in negotiating with the union.

At a union meeting held at the American Legion Hall in Lafayette last Friday, OPEIU President Michael Goodwin said Gonsoulin keeps tight control over the PHI board of directors and is personally responsible for the strike dragging on. Goodwin is also exploring the idea of organizing pickets outside Gonsoulin's Houston residence. "This is a one-man operation, and the problem is, he's the problem," Goodwin says. "We've got to figure out a way to move him. We've got to start to personalize this in some way because this is personal."

On the picket line in front of PHI, Richard Laughlin admits that many people, including those still working at PHI, have little sympathy for the union pilots. "People think we're being greedy," he says. "But this is not about money."

After the contract negotiations broke off, he says Gonsoulin instituted a new pay plan for pilots in an attempt to keep them from going on strike. Under the new payroll, Laughlin says he stood to make a $1,000 per month raise, putting him at an annual salary of about $106,000. In addition, Laughlin says PHI also raised overtime pay and has been paying out lucrative bonuses to all new and continuing pilots.

"Now, why," Laughlin asks, "haven't all the pilots gone back to work for that kind of money? Because as soon as we go back to work all those bonuses go away. But the main reason is it's not about the salary, it's about the union."

He says for many pilots, the pay plan has not been as much of an issue as general working conditions. In the new contract negotiations, pilots say PHI has fought for stricter vacation policies, tighter health regulations and a continuation of mandated overtime, which many pilots complain will mean even less hours to spend with their families.

"I'd rather take less money if I could have more time to spend with my family," Laughlin says. "This isn't about pay. It's about job security, and it's about taking our vacation and our sick leave away from us, and it's about treating your people with respect and dignity. Unfortunately, [Gonsoulin's] idea of employees is to use us as business tools. Use the tool and when it's worn out, throw it away."